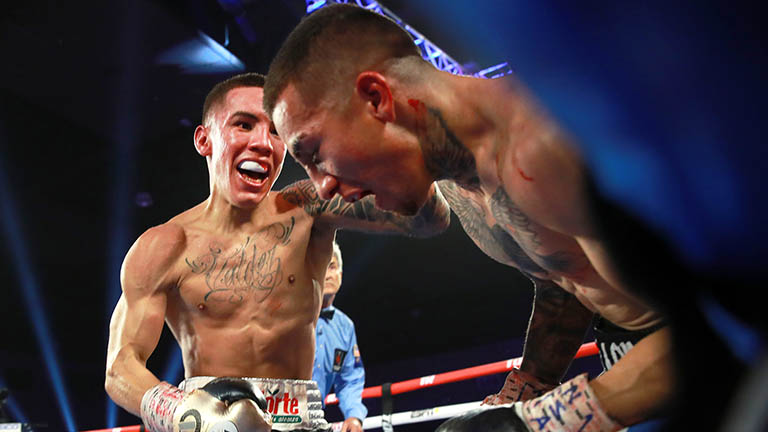 WHEN it was decided in late 2018 that Eddie Reynoso, the trainer of Saul Alvarez, would assume the role of chief second for WBO featherweight champion Oscar Valdez, it was an obvious sign that his handlers were concerned about the shelf life of their charge.

The entertaining 28-year-old Mexican had been put through the wringer in recent years, engaging in TV-friendly barnburners with rugged, chin-testing journeymen like Miguel Marriaga and Genesis Servania. Against former titleholder Scott Quigg, who had come in overweight, Valdez had to fight through with a broken jaw. The cost? A trip to the emergency room and a year-long recovery, part of which was spent trying to sip soup with his mandible wired shut.

Clearly, the physical toll was becoming an unavoidable issue, so his handlers whisked Valdez away from trainer Manny Robles and brought him to Reynoso in hopes of shoring up his defensive abilities.

Against the game and durable Mexican-American Jason Sanchez at the Reno-Sparks Convention Center, Valdez showed flashes of the fruits of his newfound collaboration en route to a unanimous 12-round decision in the third defence of his title.

Judges Glenn Trowbridge and Tim Cheatham both scored it 118-109, while Eric Cheek had it 117-110. As one-sided as the fight appeared, Sanchez brought enough resistance to force Valdez to work hard for every round.

Sticking behind a consistent jab and working the body, Valdez was not exactly subdued on offence. But it was clear that he had been configured to think more responsibly about his defence. Many moments during the fight, Valdez would step away just as Sanchez was mounting an attack, whereas in the past he would have been inclined to exchange.

There was plenty of that, too, though, and that should please observers worried that the changes in Valdez’s philosophy may end up distorting his natural gifts. On this night, at least, those fears seem exaggerated, as Valdez pressed forward, winging shots with customary spiteful conviction.

In round five, Valdez scored the lone knockdown of the fight with one of his patent lead left hooks. Still, Sanchez withstood Valdez’s best shots and more impressively, rarely shied away from the action. Indeed, referee Vic Drakulich had little to do besides separate the fighters from the occasional clinch.

Both were gunning for each other’s heads in the final seconds of the fight, much to the approval of the reported 2,412 in attendance.

Afterward, Valdez admitted that he has had trouble making the featherweight limit and hinted that he might move up. “I also have to listen to my body,” Valdez said. “Sometimes I get tired in there, and I’m not sure if it’s because of the weight loss.”

Hopefully Valdez will not vacate his title until after he fights Carl Frampton, whom promoter Bob Arum said could happen later this year “if Frampton is successful in his next fight.”

Flores worked assiduously behind his jab and struck with repeated straight rights throughout the night, as Briceno pressed forward cumbersomely, seldom throwing more than one punch at a time.

All three judges awarded the contest to Flores, with Patricia Jarman and Dave Moretti turning in scorecards of 78-74, while Robert Hoyle had it 79-73. Robert Byrd refereed.

Though he remains Brazil’s only fighter to ever win an Olympic gold medal, Conceicao has not been able to translate his early amateur success into the professional ranks, treating fights as nothing more than paid sparring sessions. Drakulich refereed.

Seemingly on autopilot for the first five minutes of the fight, Atlanta-based light-heavyweight bruiser Michael Seals sprung to life late in the second round (set for 10) with a right hand that clipped Philadelphia’s Christopher Brooker on the top of his head, causing him to instantly black out with his back spilling over the bottom rope. Referee Jay Nady rushed in to stop the fight at 2-00.