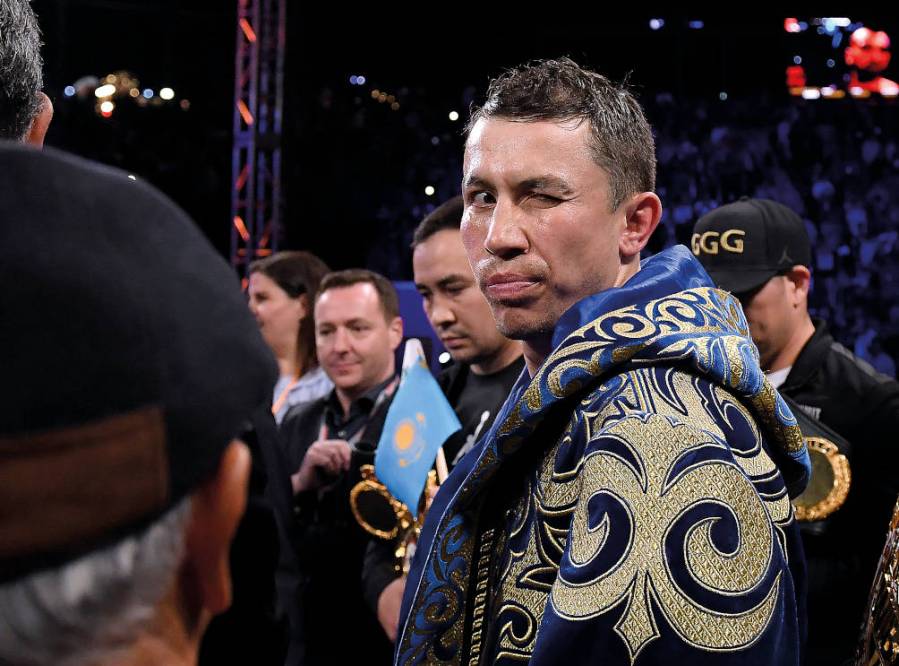 'I have not yet achieved everything that I wanted to,' declares Gennady Golovkin ahead of Friday's mandatory defence

AFTER 14 months out of action, Gennady Golovkin returns to the ring on Friday night with the chance to make history in his clash with mandatory challenger Kamil Szeremeta. Just 24 hours before his great rival Saul Alvarez challenges Callum Smith for two of the four super-middleweight belts, “Triple G” will attempt to successfully defend a version of the 160lb title, this time the IBF strap, for a record-breaking 21st time, nudging him beyond Bernard Hopkins (20).

There is no doubt, however, that his star has faded since he was beaten by Canelo in their rematch back in September of 2018. Victories over Steve Rolls and then a decision against Sergiy Derevyanchenko, which reclaimed a portion of the title, have only partially reminded the world of Golovkin’s class.

This is the third fight on his mega-money deal with DAZN and it is clear that the broadcaster, not to mention Golovkin himself, are desperate for the puncher to face so-called ‘marquee names’ once more in 2021. In the eyes of the boxing public, nothing less than an explosive performance against Szeremeta will do.

“I have not yet achieved everything that I wanted to,” Golovkin said on Monday of fight week. “I have to win on Friday first and after that I will look at other opportunities and other options.”

It has been suggested that the fight he craves the most is a trilogy showdown with Canelo and the timing could not be better for him to make a showreel statement on the eve of the Mexican’s pandemic debut. DAZN, too, will be able to push the narrative if Golovkin provides them with a spectacular clip for the broadcast.

Funnily enough it was made clear to the media involved in Golovkin’s pre-fight press conference that any questions regarding Canelo were not only not welcome but that they would be muted altogether. It was instead insisted that Triple G was focused on Szeremeta alone.

Of course taking care of his mandatory will clear the decks for the record-breaking 38-year-old to fight who and when he chooses in 2021, when the world expects to return to something approaching normality. Golovkin knocking someone out feels like an appropriate step in that regard.
“I have really missed boxing,” said Golovkin, who beat Derevyanchenko in October 2019. “I wanted to fight this year. This is not just any fight. It is a fight with great meaning, The goal — fighting for a record 21st. It’s a very important fight because it’s record-breaking. It’s exciting for any athlete to set a record.”

As it happens, Szeremeta has also been out of action since that night at Madison Square Garden, when he stopped Oscar Cortes in the second round of their scheduled eight. It was enough to solidify his position in the IBF rankings and help him emerge as their next mandatory.

The 31-year-old is 21-0 but with just five inside-distance wins, there is nothing to suggest he has the requisite power to stop Golovkin in full flight. Unsurprisingly, he has also never mixed in company on Golovkin’s level with all but two of his fights taking place in his native Poland before last year’s New York sojourn.

The former European champion can count a faded Kassim Ouma among his opponents but he has only boxed in two scheduled 12-rounders in his life – one of those, against Frenchman Andrew Francillette, went the distance. Little surprise, then, that Golovkin is 1/33 with most oddsmakers. Szeremeta at 9/1 looks like one of the worst prices in the history of recorded bookmaking.

But this is a classic case of not if Golovkin wins, but how. Anything other than a brutal knockout will only add to those voices that suggest he is in some way over the hill.

“It’s difficult for me to say whether I’m in my prime or not,” Golovkin admitted. “But during training and sparring I feel great and as strong, powerful and tenacious as I did five years ago. Maybe even better. It was general training but at the same time I tried to broaden my scope and special emphasis was made on power training.”

Bad news, perhaps, for his challenger, a former footballer who took up boxing after watching Rocky films. Said Szeremeta: “I have been doing absolutely everything I could to be best prepared for whatever Golovkin is going to bring.

“You can not defeat time, we all know that and we know his prime is behind him and I am walking into my prime right now. There is no pressure on me.”

There will be, however, immense physical pressure on him at the Seminole Hard Rock Hotel and Casino in Hollywood, Florida. He will do well to make it through six.

Among those in action on the card, which also serves as DAZN’s UK debut, is Londoner John Ryder, who is fighting for the first time since his controversial defeat to Smith 13 months ago. Fights with the likes of Fedor Chudinov and David Lemieux, not to mention a rematch with “Mundo”, have all been mooted but he will instead take one Californian Mike Guy over 10 rounds before turning his attention to a potentially big 2021.

Ryder said: “I’ve had a long time out of the ring, Mike Guy has my respect. I need to do a job, enjoy Christmas and then look ahead at what’s to come.”

In other notable action, South Korea’s Hyun Mi Choi should successfully defend her WBA super-featherweight belt via 10-round decision over durable but limited Colombian, Calista Silgado.

The Verdict Without question the pressure is on GGG to impress.