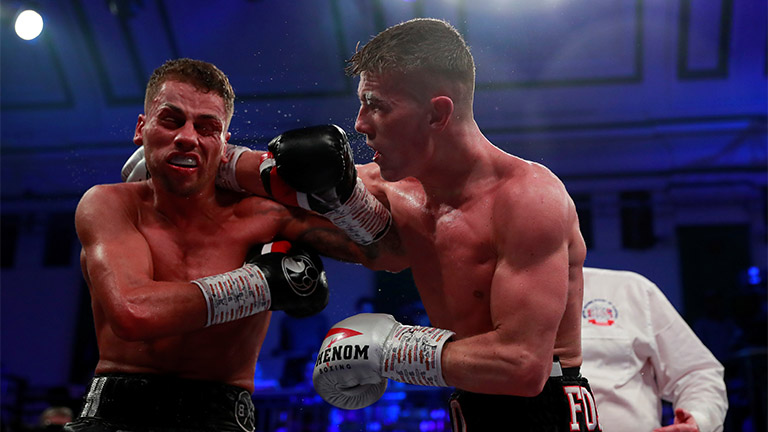 THERE’S another rematch this weekend, at the York Hall in Bethnal Green on February 22, where British and Commonwealth super-bantamweight champion Brad Foster defends against mandatory challenger Lucien Reid.

Their fight at the venue last September ended in a majority draw. One judge had Reid up by four, the others had it level at 114-114, six rounds apiece. The consensus at ringside was Foster was fortunate to hang onto the belts he won in the space of 10 weeks earlier in the year. BT Sport had Reid up by a couple at the final bell and Boxing News also had the challenger winning. The scorecards showed a different story. Reid won the last two rounds on all the cards to grab a share.

The rounds were messy and hard to score. Both were nicked after accidental head clashes and coach Alan Smith told Reid during the middle rounds that “one or two clean punches” would be enough to win the sessions.

That is the sort of fight it was and Smith felt his fighter pinched enough of the early and late rounds to get the decision. The Foster camp, headed by father and trainer Martin, feel Reid should have been told off for holding and believe he is vulnerable to body shots.

Certainly there was a moment in the ninth when Foster, who broke a knuckle during the fight, found space on the inside and dug in some hard shots downstairs that Reid obviously felt.

This time, Foster, 11-0-2 (4), surely needs to get closer more often and work. In a cheeky story, manager PJ Rowson claimed the champion from Lichfield, Staffs, has been sparring journeymen ahead of this because “he needs to deal with people who want to hold.”

From the challenger’s camp, Reid, 8-0-2 (4), said he thought Foster would try to avoid the rematch and now it’s happening, he predicts a knockout. By way of a response, Rowson said: “We hope Lucien comes to fight – and not hold.” So it’s simmering nicely.

From Hackney, Reid turned pro in 2015 believing that because of his amateur pedigree, he would be pushed on quickly and become British champion within a year.

That he didn’t, he says, is down to “politics,” but there have been cuts and changes in trainers that have slowed his progress as well.

The Foster camp say the champion will be better this time because he will have learned from the experience – and will be refreshed. The first fight was Foster’s third scheduled 12 rounder in the space of only six months – and he was just 21 at the time.

Smith did his homework ahead of that first fight. He reckoned Foster had looked good against Leon Gower and Josh Wale when they came to him and the plan for Reid was always to move, not engage and pick clean, eye-catching punches. He so nearly pulled it off.

This time, it promises to be equally tight and Reid can nick it on points.

Also at Bethnal Green, there’s a 10-round eliminator for the British super-middleweight title, held by Lerrone Richards, between Welsh southpaw Kody Davies, 10-0 (3), and Umar Sadiq, 9-1 (6). The styles may gel. Davies likes to get on the front foot, while the 6ft 3ins tall Sadiq stands off and waits for the chance to counter.

Both have boxed Zak Chelli and on that formline, the pick has to be Davies. Chelli outpointed Sadiq over eight in a clash of willing novices after both were shaken up in a dramatic last and Davies went on to beat him over 10, up at 175 lbs.

Down in the second, Davies was wary for a couple of rounds after that, but once he got on the front foot again, he got on top and pulled away in the second half to win unanimously.

Davies says he only went up to light-heavyweight because there was nothing else on offer at the time and that he makes 168lbs comfortably. He looks the more robust of the two and has more fire in his belly.

If he isn’t boxing, Davies is getting up at the crack of dawn to work long days on building sites for his father, while Sadiq has the option of going back to work as an accountant. Davies is also driven on by the memory of his late sister and can win by stoppage in the second half.

Also on the bill the likes of Willy Hutchinson, Louie Lynn, Dennis McCann and Ryan Garner aim to maintain their unbeaten pro ledgers.

The Verdict A necessary rematch, but don’t expect any fireworks.