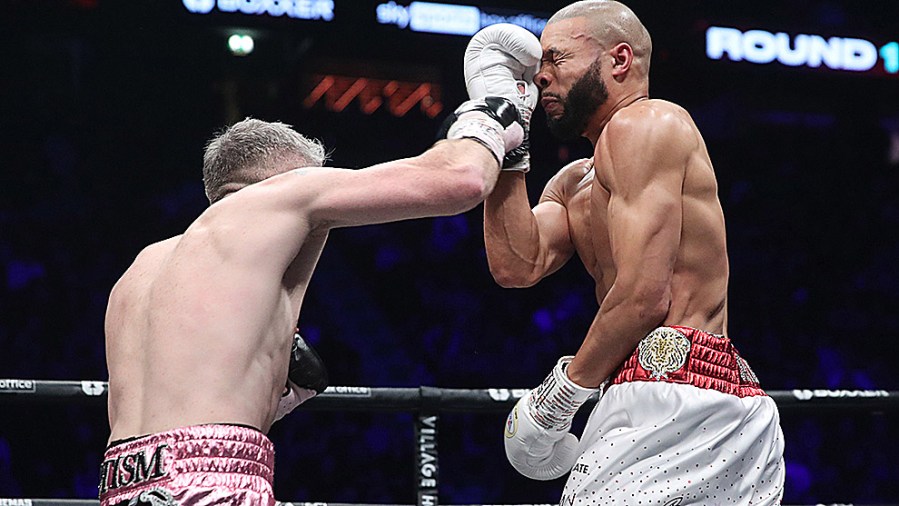 Smith does the unthinkable and sends his rival’s legs to mush, writes Steve Bunce

IT WAS probably the only finish possible to end a week, a rivalry, a fight and an event that was truly exceptional.

Liam Smith found the sweetest punches of his long, long life in boxing to send Chris Eubank Jnr sliding in bitter defeat and defiance to the canvas. Time stopped inside the cauldron of the Manchester Arena as people stood in shock, covering their mouths in disbelief, hollering at the ceiling and just staring in silence.

And then Eubank Jnr beat the count and somehow stood on the craziest legs I have ever seen dance the boxing boogie in a ring; he was gone, sure, but he fought the last bits of sense to insist he was fine. He was not, there was chaos and then it continued. Absolute bedlam.

Smith had moved to a good place to start the last assault; a sharp right forced Eubank Jnr to hold with his last remaining strength. It was no good, the fight was lost, his spell was broken, his soul taken and he tumbled down again, clutching madly to Smith’s legs. It was instinct, desire, a very last lost cause. Smith knew he had to get him out of there from the moment he first hurt him – never give a Eubank a second chance, any chance to be honest. And, never underestimate the ability of a Smith to finish; if they get you hurt, they get you out of there. It was a perfect storm of opposites on Saturday night.

It was a messy end, to be fair, and that is to be expected with the wildly unexpected. Victor Laughlin, the referee, waved it off, Eubank Jnr was pleading to continue, Smith was screaming and the wildest ring scramble started. More bedlam outside the ropes with people hugging and screaming or looking on in total silence. There was utter disbelief and that is not a slight on the ending, that is just an old-fashioned boxing fact. What an ending it was.

In the chaos, Joe McNally, Smith’s trainer, embraced a still unsteady Eubank and gently guided him back to his corner and the safe arms and words of Roy Jones Jnr. The great act of kindness finally stopped the great fight. Eubank Jnr, you see, had been trying to shape-up, poised in his confused state for more boxing – Smith, with adrenaline still flying, was ready. McNally swept Eubank Jnr away. It was total drama on an unforgettable night.

Eubank Jnr wanted to fight on, something pure in him wanted to continue. Smith recognised that. That all happened in that moment.

The official time was 1-09 of the fourth round, a statistic surely lost on the crowd of just under 20,000. A raw statistic that very few, even the Smith clan, could have predicted. The end exceeded the wildest fairy tales and nightmares of all those involved. It was breathless stuff, stirring stuff, a brutal reminder that no other sport does endings quite like us.

At the centre of the action was Smith, the calmest man in Manchester on Saturday night. He has, for weeks, talked about grade and quality; he had questioned Eubank Jnr’s skills. In the hours before the fight, it turned ugly when Smith questioned more than Eubank Jnr’s skills. The Board will get involved, but thankfully there were wholesome and heartfelt apologies from both boxers in the minutes after the fight. They hugged at the end and Eubank Jnr went to every member of the Smith family and entourage and offered his hand and his congratulations. He looked like a wayward guest at a giant family gathering, passing down a line of dubious relatives, all sitting in judgment. It was an act of class, a truly humbling exchange, one last shocking play as the midnight curtain fell on the event.

It started with a truly frightening entrance from both, the old arena was at its noisiest since Ricky Hatton’s triumphant days. I took my headset off to listen. The noise moved me, it was physical. Smith was first, glowing. “He loves this,” Joe Gallagher whispered to me. We were both four-feet from the canvas on BBC Five Live duty. Then Eubank Jnr sauntered down the aisle. “He looks like he is on his own,” offered Gallagher. The fighter’s dad was missing, his brother Sebastian is gone. Gallagher had made a hard observation. I had a lump in my throat; he did look like he was on his own.

The first was cautious, as we expected. Eubank Jnr missed, shuffled to set his feet and Smith kept low and kept his hands high. Smith nicked the round. The crowd could exhale on the bell.

Eubank arrived in the second and clearly won the third. In the third he pushed Smith, landed with uppercuts through the guard and looked happy. However, he was still made to miss a few times and there was no panic on Smith’s face as the right uppercuts opened up his guard.

There was absolutely no indication, at the conclusion of round three, of the sudden end that was just seconds away. I wanted another nine rounds, knowing they would get even better. The atmosphere was a mix of anticipation and pure thrills. And then the bell sounded for the fourth and last round. They stood, all bets were off.

Eubank Jnr took control again, Smith moved his head, Smith then led him to his own corner. Then time slowed, people stood and Smith landed a right, a left hook, shifted his weight slightly, connected twice more before a left uppercut, right cross and left hook dropped Eubank Jnr. His head fell forward, he was out and slid down the ring post, his legs buckled, ugly and loose under his body. His eyes wild and staring. Mayhem. Smith went to one corner, went to another, Eubank Jnr got up, hopped on two legs, insisted he was good. There was a moment of consideration from the ref and then it continued. And then seconds later, it was over for good. More mayhem and people and emotions.

“Sure, he got up too quick,” said Jones Jnr, speaking quietly outside his fighter’s dressing room at midnight. “He knows now. We all have to learn.” I checked with Jones Jnr and Eubank Jnr’s promoter, Kalle Sauerland, to see if there had been a pre-fight problem. No, was the answer I got and wanted. It’s also the answer Smith deserves.

Smith has glorious options now, terrific options. They are all entertaining and they all seem to include some type of dream night at Anfield. What a business, what a night it was.

THE VERDICT – The brilliant Smith proved, in one breath-taking sequence, that anyone can be stopped.