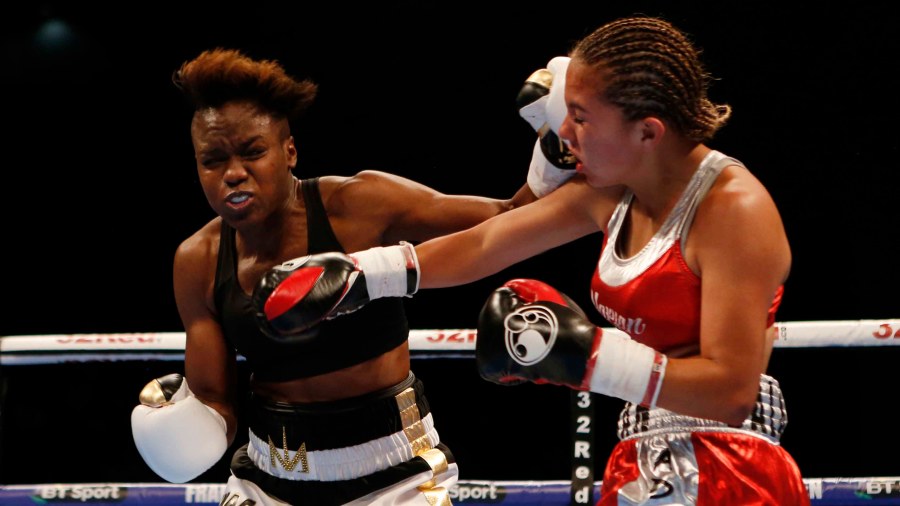 But Nicola Adams insists she's not finished yet

NICOLA ADAMS insisted her current incarnation would “destroy” the fighter who swept to her historic gold medal at London 2012 after claiming her second professional win in style in Leeds on Saturday night.

Adams milked the acclaim of almost 10,000 home city supporters at the First Direct Arena as she rounded off an explosive display by stopping Mexico’s Maryan Salazar after 35 seconds of the third round.

The 34-year-old forced referee Howard Foster to step in after a performance which underlined the improvements she has made since her top-level odyssey began with her first of two Olympic golds five years ago.

Adams said: “The Nicola now would destroy the Nicola of 2012. I feel a lot stronger now, I’ve got more experience and I’m more settled, and I think I’ve just improved.

“But I’ve still got a lot to learn as a pro. There’s so much I can do – settle down and work on my defence and placing my punches. There is no way I am the finished article just yet.”

Adams seized the opportunity of boxing three-minute rounds for the first time in her career by delivering a high-energy display against an 18-year-old opponent in Salazar who also deserves enormous credit for her contribution.

With chants of “Yorkshire” and “Leeds” tumbling from the packed stands, the thrilling atmosphere came in stark contrast to the smoke-filled working men’s clubs which staged Adams’ previous, sporadic bouts in her home city since she made her boxing debut as a 13-year-old in 1997.

It was also a significant improvement on her relatively low-key debut win over Virginie Carcamo in Manchester last month, and served as an illustration of the battle she faces if she is to crown her career with a professional world title.

Salazar, who boasted five wins from her six professional fights in Mexico, seemed undaunted by the occasion, pushing out at Adams from the start and serving up a much sterner test than the flimsy opposition provided by Carcamo four weeks ago.

Adams was forced to take a couple of shots in a first round she otherwise dominated, but her eagerness to finish the job led to her cornermen urging her to “settle down” midway through the second.

A furious assault with both fists left Salazar buckling in the ropes but she was saved by the bell, before referee Howard Foster finally decided he had seen enough after a similarly one-sided start to round three.

Adams said: “That fight was just what I wanted – Mexicans are always tough and strong and have that never-say-die attitude, and I was really able to show my skills over the three-minute rounds.”

Adams’ promoter Frank Warren indicated she will back out for her third professional fight in the summer, possibly at the same venue on another card topped by local ticket-seller Josh Warrington.