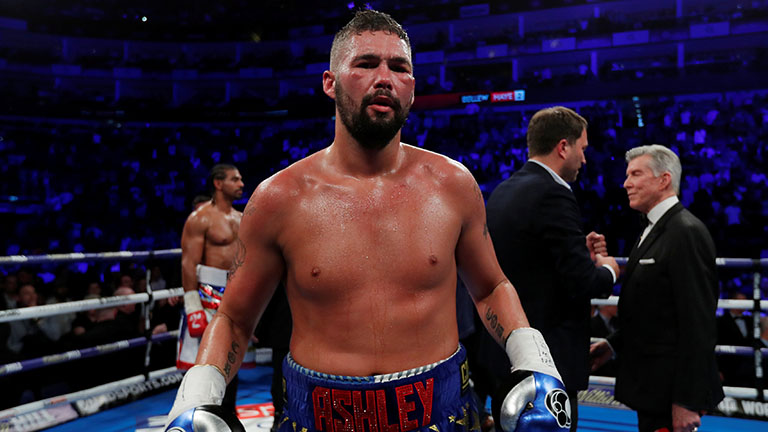 TONY BELLEW’S next move will be an interesting one. After beating David Haye at heavyweight, there are only a few fights he is willing to take in that division. But Tyson Fury is one of them.

His promoter Eddie Hearn sounded a note of caution. “He met Tyson [after the Haye cancellation] and they shook on a deal to fight and I said to him, he ain’t going to fight you,” Hearn said. “Tyson Fury, when you see what he comes back against and when you see what he fights over the next three or four fights, he won’t go anywhere near Tony Bellew. But in time that could be a big fight.”

Bellew himself is not willing to wait. He knows Tyson Fury, a former heavyweight world champion was, at his best, too talented and simply too big for him. But Tony will be watching his return closely. He’s willing to fight Fury in his second comeback fight.

“Not three or four fights. It’s just the three or four fights. He gets on that Dusseldorf form [when Fury beat Wladimir Klitschko], I don’t fancy the night that that could incur for me. I’m not about that life. I don’t need a man who’s about nine foot trying to punch my face in who’s back to his best. Listen boxing’s all about timing, I’m not going to sit here and lie to you and say I would have beaten Tyson Fury that night in Dusseldorf. Chances are I wouldn’t. He’d dance around the ring and jab my head off,” Bellew explained. “Timing is everything in boxing and styles do make fights. Tyson Fury isn’t a big puncher like Deontay Wilder or Anthony Joshua. Or David Haye. But he has a certain set of skills. He’s big, he’s elusive and he’s fast for a heavyweight. But he isn’t as fast as David Haye. So it’s a fight I like.”

In other words, just as when he took the David Haye fight, he wants to make a calculated gamble.

Andre Ward, who has bulked up to about 200lbs in retirement, is an interesting fight and he could be tempted into a return. “I really like the Andre Ward fight. There’s loads of options, like there was after the last fight. But we’ll just have to see,” Bellew said. “He wants the fight. Believe you me, he thinks he can beat me easy. He wants the fight.”

But the Liverpudlian warned, “I’ll beat Andre Ward. You’ll all laugh and think I haven’t got a chance but I will knock out Andre Ward. I will beat him down slowly but surely. I can do it two ways. I can outbox Andre Ward is I choose to. I have a different set of skills to what he’s faced before. I can do things differently. I can beat him. I don’t care how good he is, I’ve got all the respect in the world for him. An amazing fighter, pound for pound great, but styles make fights and I will beat him.”

“I can match him [on the inside]. He’s never fought a fighter who can match him on the inside. That’s his greatest strength. It really, really is,” Tony explained. “He’s Bernard Hopkins 20 years younger, that’s exactly what he is. But there’s ways to beat him. I know I can beat him. I’m one hundred per cent convinced I can beat Andre Ward. As great of fighter as he is. Once again I’ll beat him but he’ll go down as a far greater fighter than me, because of his achievements. He’s a brilliant fighter, he’s a legend in the game. But I’ll beat him. That fat Scouser will beat him.”

Dave Coldwell, his trainer, puts another option on the table. Bellew has won a cruiserweight world title and beat Haye twice. His trainer thinks he could retire now with his head held high. “I would love him to walk away,” Coldwell said. “In the gym, he’s getting better and better every time. He’s got such a great boxing intellect and he thinks about things. With age comes his maturity. He’s able to then take it into a fight.