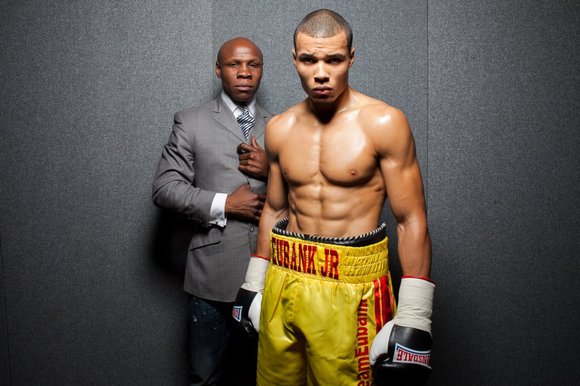 HARLEM EUBANK made a solid start to his professional career with a first round stoppage win on Scott Welch’s May 27 show in Brighton. The cousin of super-middleweight contender Chris Eubank Jr, who was ringside with his father, showed he will not be daunted by the family name but embrace it as he somersaulted over the top rope at the seafront Metropole Hotel, then decked Bosnia-born, Croatia-based opponent Anto Nakic three times before doing a back flip in the centre of the ring in celebration.

It’s important to retain perspective of course; 34-year-old Nakic only had two wins on his record from his previous 13 fights before lasting just 2-29 with Eubank. The punches that did the real damage was a straight right-left hook combination that crumpled Nakic to the deck. He beat the count but was down again in the next, and then toppled over under another onslaught when pinned to the ropes.

“After the first one I saw his legs fold and thought he’s felt the power now. His legs did not look like they were recovering so it was just a matter of taking my time and finding the shots. I didn’t try to rush in with the next one and found him a few more times.”

The early finish meant it was short and sweet but Eubank was not complaining.

He added: “I am happy either way. I am fit and have been training for my debut for a long time now.

“I was just ready for anything – four rounds or a stoppage as I knew my power would shine through eventually. I’m a different fighter to what I was in the amateurs. The amateurs was learning for me and that’s why I jumped in at the deep end in every fight so I could learn the hard way.”

Eubank Sr added: “It was a beautiful performance but what he may regret tomorrow is not keeping him in there two rounds longer because it was nice and he was on form. He might need to work on the jab a little more but when he let go of the punches they were sharp and accurate.

“We all saw the entrance which means we have another superstar on our hands, we just need another 15 fights for that superstar tag to stick!”

Super-middleweight Ben Butler is another fighter who loves to entertain and did so in a 40-36 four round points win over the game Jan Balog. Butler, 4-0 and from nearby Burgess Hill, has returned to boxing after a promise he made to his mother as she fought terminal cancer.

Czech Balog gave as good as he got, as Butler dispensed with any form of defence and took plenty of shots as he danced in and out, throwing combinations.

Elsewhere on the bill, middleweight Nicky Jenman beat Czech Republic’s David Bauza on a technical decision, in what turned into a bloody battle and left the local man with 10 stitches near his right eye. A superb left hook knocked Bauza to the canvas in the first, but he dragged himself back before the accidental clash of heads occurred that would eventually cause the premature end.

Jenman had treatment at the start of the fifth and then fought with blood streaming down his face before the referee Lee Cook handed the Brighton man a 50-45 victory from his card.

Marcus Eaton admitted he was “distraught” after he drew 39-39 over four rounds with the game Luka Leskovic. It was the second draw of Eaton’s unbeaten career but Leskovic deserved his share of the spoils against the Shoreham fighter.

Heavyweight Tom Little claimed a 59-57 points win over Kamil Sokolowski in another entertaining fight on the card. Both boxers threw fast and furious combinations despite their size but Little had the better of the exchanges.

Brighton-based Derek Renfrew leapt on the ropes after claiming the third straight win of his career.

The super-middleweight beat Miroslav Tustic after the referee waved the fight off in the third round. Tustic came to win but ran out of gas after being felled by a body shot in the second round and taking another shot by Renfrew while down, which earned the apologetic home fighter a stern talking to by referee Cook.

Hove-based heavyweight Nick Webb did not fight due to injury scare while home-favourite Lloyd Ellett was frustrated after his opponent pulled out and attempts to find a late notice replacement failed.