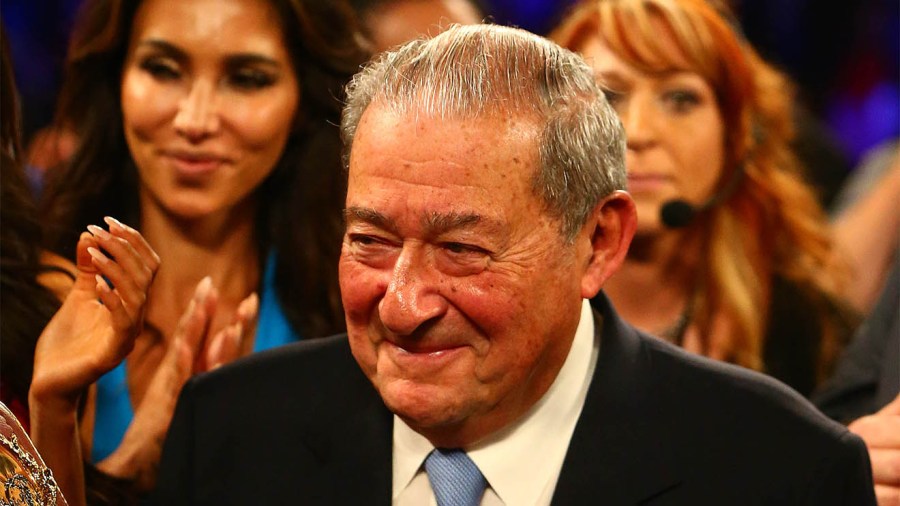 Topping the 2019 Boxing News Power List is Bob Arum, the 88-year-old promoter who shows no sign of slowing down. Ron Lewis caught up with the legendary figure to find out how he stays relevant in an ever-changing sport

“THE key is to constantly have young people involved in the business,” says Bob Arum, 88 years young and still the biggest hitter in the boxing business. “It’s very, very hard for an older person not to be caught up in the ways he was used to in the past. As soon as I hear an idea that I am not familiar with that involves new technology, I go to my young people and they have read about it, or know about it, and they can brief me.”

It feels like Bob Arum has been around in the boxing business forever – he even pronounces champion “champ-een”, like a character in a 1950s gangster film, and will wax lyrically tales of Ali, or Hagler, or Oscar or Manny. While he might not do all the heavy lifting at the company he built right now, he is still very much front and centre at Top Rank.

And these are heady times for Top Rank. A few years ago, they were being squeezed as one of HBO’s promoters, but a monster deal with ESPN, the biggest sports broadcaster in the United States, owned by Disney, and its sister streaming service ESPN+, has given them the biggest platform in the sport today.

Streaming, the idea of watching whatever fight you want, whenever you want, wherever you are, is a long way from Arum’s early involvement in the sport, which was mainly closed-circuits screenings. Big screens would be set up in arenas across North America (hence fights were often midweek when there was low demand for the venues) and fans would have to pay a premium to watch the fight live.

“I’ve seen it all,” Arum said. “When I first got into the business, there wasn’t even international satellite. I remember you would do an event and have it transmitted to a studio in New York by telephone company longlines, then you would make a tape of it and you would have to ship it to the plane to fly over to London.

“And if you missed the night plane to London, you only got 50 per cent of what the rights fees were, because they would have to wait two nights to see the fight.

“In the 80s, the technology came onboard for domestic satellites. That enabled the cable companies, satellite providers to expand, that gave the ability to go direct to customers with pay-per-view. Then there was no need to use big auditoriums, cinemas, the closed circuit was limited to bars.

“That’s where we were until today and we are beginning to see the beginning of streaming technology and so a lot of the streaming services can’t do pay-per-view and then you have entities like DAZN who hope to do away with PPV.”

After more than half a century at the top of the sport, it is not just the broadcasting that has changed. For much of his promotional career, Arum vied with Don King. Now a new generation of promoters are out there to compete with.

“There was a period when there was no King, then King became a big force in boxing and I learnt how to work with that,” Arum said. “Now there are guys like Eddie Hearn in the UK and [Al] Haymon in the US and you adjust to all the challenges, because I am not arrogant enough to think I can do it by myself. I need a lot of help to keep up with the times.

“King was very, very difficult to compete with, to operate with, but once you did a deal with King, he was a terrific partner. All he cared about was going in front of a microphone and bellowing and he let us do all of the work that had to be done to sell the fight – the deals with cable networks, the deals with sponsors, he was terrific that way. He didn’t get in our way and I was happy to give him the microphone, because he was more entertaining.

“He would do anything. He wasn’t great at the detail, but he was a tremendous showman. In promotions I did with him, like the first Leonard-Duran fight, like De La Hoya-Trinidad. He was a good partner. I have no complaint about that.

“You know, I let my stepson Todd [Duboef], who is the president, deal with the younger crowd. A lot of them like to sit around and hear me talk about the old days. But the truth is, I can talk boxing to them but have very little in common with them.”

Streaming has caused a revolution in the business. Go back just two-to-three years and no one could challenge the impact of HBO and Showtime. Now HBO are out of the sport and Showtime are trying to adapt.

“HBO and then Showtime carried boxing. But boxing suffered from that because, by definition, HBO and Showtime are limited subscribers and they also tended to be older because they could afford the monthly fee,” Arum said. “We realised boxing wasn’t growing and was in this cycle and then HBO and Showtime had major problems in the fact that they had to compete with Netflix in entertainment. So, they took money from boxing, which made sense, and we realised we had to do something, so we went to ESPN. And we found out what we had always suspected – that the audience for boxing is not old, it’s younger, it skews younger.

“Now it is free on ESPN, we get young Hispanics, young African Americans watching, so our demographics for a younger audience are better than baseball, it is as good as basketball and it has opened everybody’s eyes.”

‘I am not looking at Joshua for Fury. Hearn is not a problem; I can deal with Eddie. The problem is if he is tied to DAZN’

Arum and ESPN are no strangers to each other. He promoted on ESPN during the broadcaster’s infancy for 15 years from 1980, when he did a weekly boxing show.

“At the start it was the only live programming that ESPN had,” he said. “We were surrounded with things like Australian Rules football, they had maybe two-million subscribers, but there wasn’t much cable TV then.

“Five or six years into it, it looked like ESPN was going to go under, because they were paying a fee to the cable systems to carry them and the ad revenue wasn’t enough to sustain them. The president of ESPN was on a road trip and saw signs at motels all over the highway, ‘come Tuesday we have ESPN’ or ‘Top Rank boxing’. A lightbulb went off and he thought ‘these cable systems can’t exist without us’.

“So, they started charging the cable systems a fee to have ESPN and from that they became a multi-million-dollar company and now ESPN is one of the most valuable assets that Disney has.

“The full potential of streaming won’t be seen for 10 years, then I think streaming will do to television the same way that television did for radio. There will be linear television, but it will not be anywhere near as robust as streaming – that’s what Disney figures and the guys at Disney are a lot smarter than I am.”

The ESPN boost has ensured that Top Rank remain at the forefront of signing fighters. Vasyl Lomachenko and Terence Crawford head their stable, while a deal with Tyson Fury has given them their first big-name heavyweight in years.

“People love heavyweights, they always have,” Arum said. “The problem in the United States is all our good heavyweights are in the NFL or the NBA. The Brits, the Eastern Europeans don’t have that problem.

“Their heavyweights are not playing soccer, they are too big. A guy who is six-foot-six or six-foot-seven doesn’t aspire to be a basketball player in the UK. We have guys like Terence Crawford, who can’t play [American] football or basketball at that level. He’s even too small for baseball. Those kids will drift into boxing.”

With Anthony Joshua claiming back the WBA, WBO and IBF heavyweight titles, hopes will drift back to the prospect of a Joshua-Fury fight, although Arum said that fight would not be possible if Joshua is tied to DAZN, because of the need to put it on PPV.

“Are DAZN about to say, we will pay $200 million for the fight?” he said. “I don’t think so. There is a limit. Therefore, I am not looking at Joshua. Eddie is not a problem; I can deal with Eddie. The problem is if he is tied to DAZN.”

Even at 88, though, retirement is not an option. “Why would I retire?” he said. “You have got to be stupid to retire if you can do what you do and enjoy it, why would you do something that isn’t as much fun, sitting at home?

“I love boxing. Unlike a lot of promoters, I get there for the first fight and watch all the fights. I am as enthusiastic about boxing as I have ever been. I don’t want to play golf, I can’t play tennis anymore, my knees have given out. This, for me, is a lot of fun.”