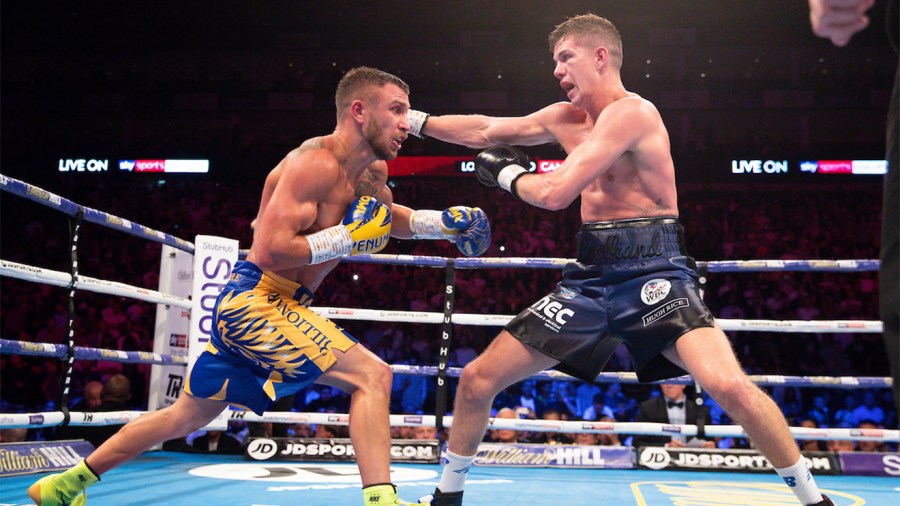 On August 31 2019 Vasiliy Lomachenko underlined his supremacy against Luke Campbell in London. John Dennen reported ringside from the O2 Arena

BOXERS trade in pain. They balance how much they can inflict on an opponent against how much of it they must endure themselves. Even a fighter as brilliant as Vasyl Lomachenko is not exempt from that transaction.

Luke Campbell caught him. Neither hard enough nor often enough to win, not by a long stretch, Lomachenko was far ahead on the cards. But he showed on this night that the great man, a three-weight world champion already, was at least for Campbell not untouchable.

“He has very big power and he gave me a good couple of shots,” Lomachenko said of his challenger. “He’s very smart, he’s technical, he has reach. That was his main weapon.”

A highlight for the Briton and his supporters came in the seventh round, just as Lomachenko was in his stride and seemed firmly in the ascendance, Campbell lashed in his backhand left hand, repelling his tormentor. The crowd roared him in and Campbell opened up.

But his success came at a cost. In this instance Lomachenko uncorked a heavy right hook, answering Luke in kind and swinging momentum back his way once again. During the fight Lomachenko would hurt him, badly at times. The Englishman did have the skill and the intelligence to compete with the WBO and WBA lightweight champion but it was his bravery and raw determination that helped him see out the full 12 rounds.

Campbell gives little away. He is a cagey boxer, with a southpaw defence that is hard for an ordinary fighter to unlock. But even he had to smile when Lomachenko’s southpaw caught him flush in the third round, snapping Luke’s head back on his shoulders. That expression, the fleeting grin was an acknowledgement of the impact. To Lomachenko it was a tell. He pressed in at once, to punish him with the exact same left cross once again.

The Briton’s face at the end of the fifth round again was the clue to just how much the champion could hurt him. Lomachenko launched a tremendous attack, burying Luke in the ropes, hooks connecting to the head and a hard shot to the body winded Campbell. The bell to the end the session called Lomachenko off leaving Campbell to wince, uncharacteristically, as he returned to his own corner.

It was a sign that Lomachenko was taking his offence up to another level. Campbell was courageous but a fighter needs more than just heart to stay with Vasyl Lomachenko when he raises the tempo. He needs superb fitness and also some technical brilliance of his own. It was those qualities, Luke’s skill and his ability to perform in the face of the extreme pressure Lomachenko can exert, which got Campbell through moments of crisis.

Luke threw his right jab wisely. Although Lomachenko weaved his head round it, letting Campbell miss, it still stalled some of the Ukrainian’s advances. With his mouth open, breathing heavily the Briton fought through the sixth round. He still snapped a left uppercut in, catching Lomachenko unawares. When the Ukrainian leant in close, Campbell chopped down punches with either hand. He sent a left lancing into the champion’s body to push himself free of Lomachenko’s attentions.

But while he bought time and occasionally breathing room, the price for him was high. Lomachenko’s right jab popped in flush, a firm shot thrown with intent. He harried Campbell across the ring canvas, driving him into the ropes. With one hand he hit high, he sent the other cleaving into Luke’s body. He lined up a double jab and fired a left cross in after it. Leading with his back hand, his right struck in too, driving Campbell away. Luke would have his successes within a round but Lomachenko, with expert judgement, could make sure he won them. He stormed forward to snuff out Campbell’s rallies and, forcing Luke to the fringes of the ring, made sure he finished the sessions in dominant fashion. That’s why Lomachenko is a mastermind. This was all racking up his lead on the cards. He understands precisely how to win rounds. He can give away the opening stages of a fight, as he did in London, all while he is assessing his opponent to see what vulnerabilities he will exploit later in the contest.

In the 10th round Lomachenko landed that clean jab. A solid left hook slammed in and the Ukrainian pivoted round his target, ready to attack again. The crowd chanted out Campbell’s name, trying to restore belief.

In the corner before going into the last two rounds, the Ukrainian revealed that his father and trainer Anatoly told him to “throw a lot of punches, throw some combinations. I was trying but it was not easy because his hands were very long and he was waiting for me. I understood what he would do. Of course it was very, very hard”.

Luke began the 11th putting weight into long, straight shots, thrown from range. A promising start to the championship rounds, but it was there that Lomachenko really exacted his measure of punishment. A lovely left cross, arching slightly as it flew over thundered into Luke’s head. The back hand struck Campbell’s body. He was feeling the weight of the combinations Lomachenko threw, beginning to wilt beneath the assault. A final right dropped him to the deck.

He rose, to meet a marauding Lomachenko. A right hook tagged Campbell, Lomachenko sent his left in and swarmed over the Briton. Luke had to canter clear, doing well to make it into the last round. Lomachenko’s swift footwork carried him forward. He fired his cross over Campbell’s jab. Instinctively Luke whipped a right hook round. The Ukrainian stepped up the intensity yet again, moving inside to grind Campbell down with heavy hits. Badly hurt, Campbell swayed, just about holding his feet under him. He plunged in, desperately trying to grab his tormentor in a clinch. He even tripped Lomachenko as he pitched forward.

The Ukrainian finished hunting his opponent down but Campbell was too proud a competitor to be halted inside the distance. “I was so close [to a knockout] but it’s boxing. I said before for me it doesn’t matter about the result; knockout, TKO or no mas or score, it doesn’t matter. Win. Just win,” said Lomachenko. That’s all he requires.

Lomachenko did take a wide unanimous decision. Benoit Roussel and Omar Mintun both scored it 119-108, Jean Robert Laine had it 118-109. Victor Loughlin was the referee.

“He just beat me, so he’s very good. He’s a special fighter and we all knew he was a special fighter. This is boxing and we train to win. Obviously, I’m disappointed in myself for not getting the victory,” Campbell said immediately after the fight.

The man from Hull though is a world class boxer. The performance he delivered at the O2 Arena could well have won him a championship belt against almost any other fighter in the lightweight division. It has been the Olympic gold medallist’s misfortune that his two shots at a world title have come against Jorge Linares in America in 2017 and this imperious foe in London. Lomachenko, who in this fight added the vacant WBC belt to the WBO and WBA lightweight titles he already held, is a class apart.

“Luke Campbell didn’t disgrace himself. He fought a hell of a fight. He’s a hell of a fighter. Big, big heart, and Luke will be back,” Bob Arum, the veteran promoter of Lomachenko, said. “’Loma’ is up there with Muhammad Ali, Marvin Hagler, Sugar Ray Leonard, Floyd Mayweather, Oscar De La Hoya, Manny Pacquiao. He belongs with those fighters.”

The Ukrainian is displaying the hallmarks of a modern great, though the final verdict on him can only be made at the close of his career. Lomachenko himself wouldn’t be drawn on that question. He’ll leave it to others to make that judgement.

His immediate future though will be fascinating. He wants to box once more this year but his ultimate goal is to become the world’s undisputed lightweight champion. His target is Richard Commey’s IBF title. Teofimo Lopez though is expected to challenge Commey for that next, likely on December 14 at Madison Square Garden in New York. Lomachenko will be waiting for the winner.

This appearance in London was a special occasion. Both fighters were exceptionally well received in the arena, Campbell naturally as the home fighter and a London 2012 gold medallist. But the ovation that greeted the arrival of the Ukrainian was spectacular. “He doesn’t necessarily have to fight a Brit to come back here and sell out the O2,” his promoter Bob Arum said afterwards. “Muhammad Ali, who was my mentor in effect because I was with him for so long, taught me one thing: if you’re going to be a world superstar in boxing you have to fight all over the world. He can’t limit himself to the United States or any one country. My goal and I think Loma’s goal is to fight all around the world.”

Lomachenko himself scarcely noticed the crowd, so focused was he on the fight and his own performance. “I didn’t understand how they reacted, were they cheering for me or were they booing?” he wondered.

“I want to see my fight on the TV and after I will understand what happened in this fight but now if I scored out of 10, I would give myself maybe seven.”

The thought of Lomachenko delivering a 10 out of 10 performance, that is a thrilling prospect indeed.

The Verdict A special occasion in London, but Lomachenko remains king.