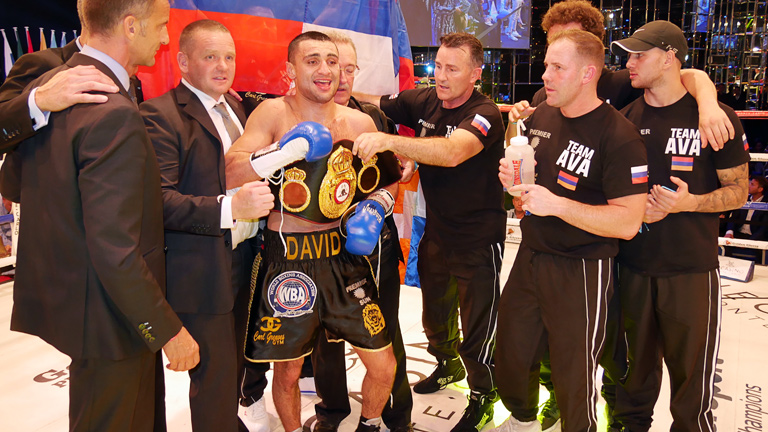 UNLESS you live in the North West of England, or perhaps Monaco, you probably won’t have seen David Avanesyan box. Yet the switch-hitting Armenian-Russian is one of the best fighters currently training in the UK. On May 28 he defends his interim WBA welterweight belt against Sugar Shane Mosley – now trained by Roberto Duran – in Glendale, Arizona. At 27 Avanesyan will concede 17 years but his strength and stamina will trouble the veteran three-weight champion.

How he arrived here is a tale worth telling. Until the end of 2014 Avanesyan had never fought outside his native Russia. After one bout with Stephen Vaughan, outscoring Hungarian journeyman Laszlo Fazekas in Liverpool (December 2014), he joined Neil Marsh as his manager/promoter. Following a six-round stoppage of Dubliner Dean Byrne in Blackpool (June 2015), Avanesyan met Venezuela’s Charlie Navarro for the Interim WBA 147lbs strap in Monte Carlo in November.

Carl Greaves, who trains Avanesyan, takes up the story: “It was our first fight together and we had a full training camp. Navarro was a dangerous puncher, heavy-handed, but David broke him down bit by bit and got him out of there with a textbook left hook to the body.”

Avanesyan still lives in Russia, but comes to the UK to prepare for fights, both at Greaves’ Newark gym and the Peacock in Canning Town.

“David’s been the chief sparring partner for [IBF welter king] Kell Brook’s last few fights,” explains Greaves. “He came here in early February because originally the Mosley fight was going to be in early May. Kell heard about David and hired him for four weeks sparring [for his March defence against Kevin Bizier]. When the Mosley fight was put back to May 28 David went home for two weeks, then came back to the UK.”

Avanesyan has sparred Ahmet Patterson, Gary Corcoran, Curtis Valentine and Tamuka Mucha. Says Greaves, “I’ve been watching Mosley tapes. He’s been around a long time and can adapt his style. He’s won his last two fights, so still has plenty to offer. But win this and in we’re in the big league. We’ll be looking at Danny Garcia and Errol Spence.”

David turned pro (back in 2009) as a super-lightweight but looks solid now at 147lbs. Explains Greaves, “He’s filling into a big welter. When David first came over, he was a super-lightweight boxing at welter. But he’s done strength and conditioning, twice a day, getting bigger and more solid. When they first sparred, Kell Brook looked two weights bigger than David. Now David looks no different to Patterson, a super-welter.”

Avanesyan’s English is limited but he can understand Carl’s instructions – after all, a left hook is a left hook whether thrown in Moscow or London. Former pro super-middleweight Eric Teymour, now a trainer at the Peacock Gym, translates as Avanesyan tells his story.

“My home town is Pyatigorsk, about two hours’ flight from Moscow,” he says. “It’s in the Caucasus mountains. It’s a nice town, a famous spa town. People go there to clean their body, for the mineral water.

“I always liked athletics, heavy things like weightlifting. As an amateur I had maybe 100 fights. I was the champion of my region. But I started boxing very late at 14 so was always more comfortable in the professionals.”

He made his paid debut at 20 and in only his second fight was outpointed over six rounds by Andrei Klimov – who would go on to contest the IBF 130lbs title last year. The other blemish in his 21-1-1 (11) record came in March 2013 when he drew with Aslanbek Kozaev (then 23-0) over 12 rounds.

“I didn’t lose this fight – it was in his town [Yunost],” he insists. “I asked for a rematch but they don’t want it. I’ll go down to super-lightweight to fight him again.

“The Kozaev fight was also in his town [Noginsk]. He was defending two belts and they gave him a draw.”

By April 2014 David was sharing a ring with former IBF super-lightweight title challenger Kaizer Mabuza, in defence of his WBC Baltic belt (odd, since Mabuza is a South African). Avanesyan won a unanimous 12-round verdict but had a tough night.

He recalls, “I’ve met many good opponents but some of my hardest fights were not against the best fighters. Mabuza gave me two cut eyes in the second round, from his head.” He mimes the gesture, just to make it clear.

David cites Roy jones as an inspiration and also Russian heavyweight Alexander Povetkin, but doesn’t copy anyone. As he puts it, “I can box and punch. I counter-attack and work. I don’t look for the knockout, I never think about this.

“I have my own style. But I watch Pacquiao and Mayweather, famous fighters, and sometimes when they do something, I take it from them.”

He appreciates what a glorious opportunity Mosley represents, saying: “This is my big chance. I’m very happy to fight such a legendary fighter.

“My own people back home know me – I stop for pictures in my home town. But in Russia it’s a little bit difficult – more people see pro boxing here in the UK. When I started boys were fighting for nothing in Russia, but now professional boxing is taking off.”

David is single but retains a strong attachment to his homeland. “I miss Russia very, very much,” he explains sadly. “My friends, my family… To leave my family for two months is very hard. But I understand this, it’s this crazy boxing world!”

BOLTON-based Neil Marsh has a small but quality stable, with David Avanesyan alongside Robbie Davies Jr (the WBA’s No. 8 super-lightweight) and welterweight Adam Little.

Marsh first saw Avanesyan in March 2015, recalling: “I gave him a three-month trial and arranged the Dean Byrne fight to see what he could do. He’s sparred Carson Jones as well as Kell Brook. He’s very strong and hard to hold off.

“I went to the WBA Convention in Panama last year and saw Shane Mosley fight on their KO Drugs show [Mosley beat Venezuela’s Patrick Lopez]. We had other offers but Mosley was the fight we wanted. He’s a big name and this fight is televised live on CBS Sports Network, so it’s a great opportunity for David. It’s a big gamble but I’m confident David can do it.”