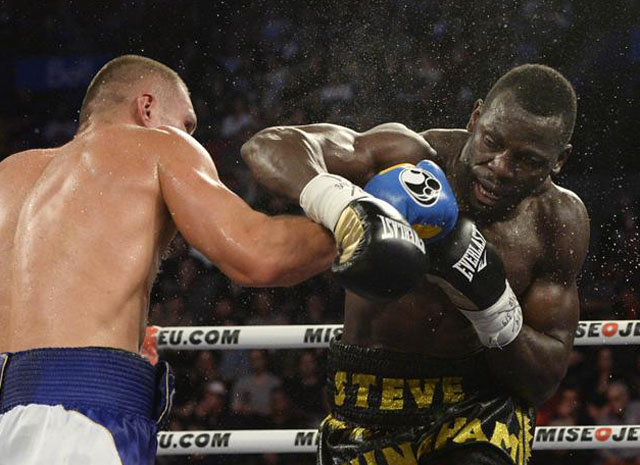 I started boxing in the Navy. I was 17 when I went into bootcamp. I wanted to go to art college but my parents never went to college so no-one told me how to
start preparing applications, portfolios, so next thing I know I’m in the 12th grade and it’s May and I’m like, ‘Damn, what am I going to do?’ The Navy recruiter came into my advisory class and he talked about college, money, seeing the world and I was like, ‘Hey, that’s it’.
I just wanted to get out of this environment. That was 93-94 – there was a lot of drugs, a lot of killings and there wasn’t nothing for a guy like me to do. I didn’t want to work at McDonald’s or Checkers and live at home. I had an older brother who was out of high school but still living at home, in the basement, paying rent and that was a problem. I looked at that and thought, ‘I don’t want that to be me’. I did my share of bad things as a teenager and I didn’t want to go back so I knew I had to leave.
The travel attracted me and just being a part of something so big: the United States military. I was an aircraft refueller, working on aircraft carriers and being able to be around jets – F14s, F18s – and the helicopters, it was a whole exciting thing, the possibility of going around the world, which I did.
Growing up I was always fighting. I was always the new kid because we moved around a lot and I got picked on. I had a guy tell me to try boxing but that was years before. I went to the gym a few times, literally a week before I went to the Navy, but when I got there I was able to train every day after work because the Navy boxing team, their gym was close to my base. I would work out every day, just hitting the bag; I didn’t have a trainer. When I finally got a trainer, I had my first fight, against the light- heavyweight champion of the Navy – and I beat him. That made me stick with it.
My first ship was the USS America which was decommissioned in 1997 then I switched to the USS Enterprise which is still rolling now. I did four years. In 1996 my battle group was sent over to off the coast of Iraq and they were bombing Saddam Hussain. We were fuelling jets fully loaded with bombs and they would come back empty.
I won the National Golden Gloves in 1998 while I was in the Navy and one or two other tournaments so I decided to try and shoot for the 2000 Olympics and I got out and pursued being a boxer.
Just before I turned pro I sparred with guys like Chris Byrd, Chris Johnson, Oliver McCall, Cedric Boswell; that’s how I learned. But the Navy experience helped too. I always had this hard work, determination thing from day one but being in the Navy pushes your limits. Joining bootcamp, you’re up for 20 hours the first day, then they let you sleep for three hours then they wake you back up for another 18 hours. You’re standing on your feet all day; they push you to your breaking point and once you’re past that, that’s what they wanted, to let you know you can do anything. They have a saying, ‘We do more before 8am than most people do all day’ and that’s kind of the truth. It helped with more determination and ‘I can do this; this is not going to beat me’.
My ‘USS’ nickname is a tribute to my Navy time and also a symbol of who I am. We took the name right before we started travelling overseas to fight, like a ship, keep on sailing, fighting in a different war zone, not at home. That started my European tour. That makes me a ship of war and that’s what this is to me: going to war.