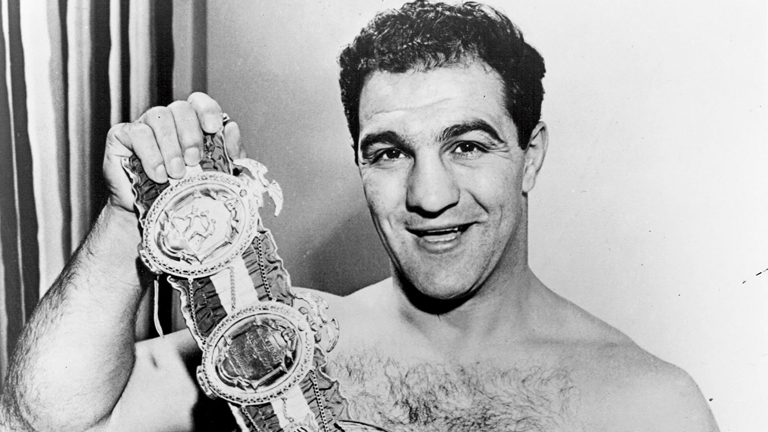 Matt Christie pays tribute to one of the greatest heavyweights of all-time, Rocky Marciano

THE number 49 suits Rocky Marciano almost as well as it does San Francisco. Born Rocco Francis Marchegiano, he wanted to be a baseball catcher in the Major leagues until a friend, Allie Colombo, worked out heavyweight champion Joe Louis’ pay-per-hour and a mission began. Legend has it that his taste for fighting heightened further after a pub brawl in Wales, near where he was stationed during World War II. What cannot be doubted is where the journey finished when as an incredibly rich national hero, he retired as unbeaten world heavyweight king, 49-0.

After a brief 12-fight amateur career, and having lost his day job as a trench-digger, he went to New York to audition for manager Al Weill and trainer Charley Goldman. Marciano was crude, awkward and his balance was all off, but he desperately wanted to get better.

“I figured he must want to be a fighter awful bad,” Goldman remembered about the moment he first met Rocky. “A kid like this deserved a break, and I wanted to make sure he got it.”

Goldman admired Marciano’s desire and gave the 24-year-old plenty of his time, honing the slugger into a more polished fighter. Both knew that the squat Marciano would never be a beautiful boxer so they worked hard on his advantages, fighting out of a crouch, banging the opponent’s body, and coming on strong in the late rounds. Such tactics demanded great fitness and the diligent Marciano was barely out of the gym.

He turned professional in March 1947, stopping Lee Epperson in three, but Goldman was keen to keep his developing charge away from the New York press and much of his early career took place in Providence, Rhode Island.

Steadily, Rocky rose through the ranks, learning lessons along the way. In March 1950, unbeaten contender Roland LaStarza was thought by many observers unlucky not to get the 10-round verdict that went Rocky’s way.

In October the following year “The Brockton Blockbuster” was matched with a 37-year-old Joe Louis and the veteran was installed as an 8-5 favourite. Marciano, always respectful, blasted the former champion into defeat in eight rounds and said afterwards, “I’m just lucky that I didn’t have to fight Joe 10 years ago.”

After retiring Louis, Marciano challenged world champion Jersey Joe Walcott on September 23 1952 in front of 40,000 fans at Philadelphia’s Municipal Stadium. Jersey Joe was 38 but a gifted and elegant technician, and when he decked Rocky in the first round the challenger looked on the brink of being outclassed. After 12 rounds, Walcott had a handsome lead on the cards and then, in round 13, it happened. Marciano threw a bomb that travelled no more than 18 inches but the explosion remains the most famous single punch in history. Walcott collapsed, his senses scrambled, his title gone.

Rocky then blasted out Jersey Joe in just a round in the rematch before offering a rematch to LaStarza in September 1953. In a wild encounter – some exchanges offered evidence of Rocky’s tendency to bend the rules – Rocky edged ahead and halted his rival in the 11th.

“He’s a 5,000 per cent better fighter now,” La Starza said in defeat. “The way he counters, the way he makes you miss, he didn’t do that before.”

Two wins over the great Ezzard Charles followed and they played their part in defining Marciano’s legend. He overcame a slow start in the first encounter to rally hard down the stretch and win a close decision. In doing so, he quietened his doubters who were convinced Charles would outsmart him. In the return, Rocky bled from two dreadful wounds – one on his brow, the other virtually splitting his nose in half, when he knocked Charles out in round eight. He bludgeoned a gutsy Don Cockell in nine rounds in 1955 and was then matched against light-heavyweight king, Archie Moore.

“The Ol’ Mongoose” started quickly and floored Rocky in round two. By the end of the session, the champion was in a bloody mess – bleeding from the brow and nose. Moore’s craftiness was bewitching Rocky until he started getting through with heavy shots. Moore was decked in rounds six, seven and eight before being stopped in nine.

Marciano then stunned the world by announcing his retirement at the age of 32, with his record forever locked at 49-0, but the real shock came 13 years later, on August 31, 1969 when he was killed in a plane crash. He was a day shy of his 46th birthday.

ITS ALL ABOUT THE MONEY
Rocky Marciano was notoriously tight with his cash (no dollar would be spent on anything that wasn’t vital – like a taxi ride) but in December 1949 he showed generosity of wallet, and character, after knocking out Carmine Vingo in six rounds. Vingo was rushed to hospital and his life hung delicately in the balance. Marciano covered his opponent’s hospital bills, gave him $2,500 and after Vingo had recovered, made him guest of honour at the Marciano wedding on New Year’s Eve 1950.

COMPUTER WARS
Just before his death, Rocky lost 50lbs, donned a toupe, and sparred 70 rounds with Muhammad Ali as part of a dream fight movie project. Marciano won by 13th round knockout.