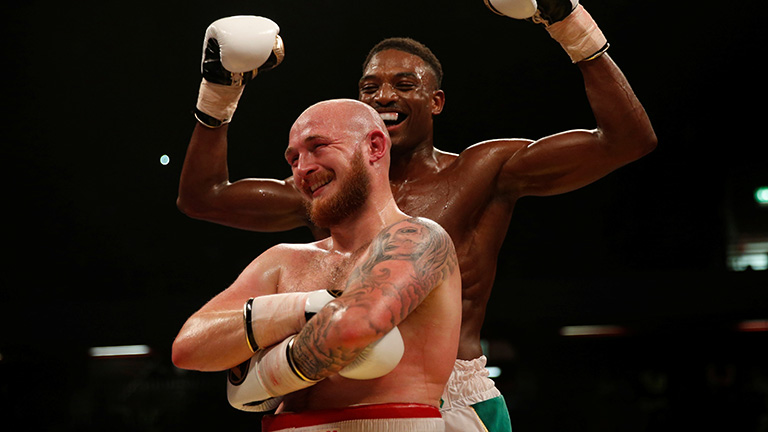 'It’s addictive. It’s like a drug.' Lewis van Poetsch tells George Storr why he is a journeyman

LEWIS VAN POETSCH campaigns as a professional boxer for the love of the sport. His attitude is infectious, energetic and far from what one might expect of a fighter with 60 losses to his name. He’s a journeyman and during a fantastic chat about his unusual and eventful career, he also spoke about the gargantuan importance of journeymen and their role at the beating heart of British boxing.

“In my opinion no one will ever understand it. People say to me ‘what’s a journeyman?’” van Poetsch says, voicing a frustration that seems to have dogged him repeatedly. “So I break it down for them and they say to me, ‘Yeah but doesn’t the competitive side of you want to win?’ I’m like, ‘Yes but also it’s a job. If I’m keeping the promoter happy, the prospect happy, the fans happy, I get to go in there and entertain the crowd, so I’m happy. The promoters ticket-seller wins, he’s happy. Prospect’s happy. The fans are happy ‘cos their mate’s won. Everyone’s happy. If I go in there and start knocking everyone out…”

Let’s be clear. Van Poetsch can box. Many up and coming fighters can attest to that and he’s taken on some big names. While it may be confusing for the uninitiated to consider that a man who habitually loses most of his bouts is a good boxer, it definitely is the case. Consider the regularity with which van Poetsch fights, (sometimes at a rate of three bouts a month) compared to that of a prospect (more like a bout every three months). Consider the fact he’s fought at every weight from light-middle through to light-heavyweight, the fact he does so at short notice.

So, the role of a journeyman is not only a tough one, but a skilful one, as fighters on the road are forced to manoeuvre through tricky rounds against primed prospects, sometimes with only days in notice. As journeymen go though, “Poochi” sets himself apart from the crowd. He says it started as a Halloween costume, but his Charles Bronson moustache soon became part of an interesting stylistic flourish. Van Poetsch enters the ring in an old-fashioned (bath) robe, a flat cap, and some retro boxing boots, to accompany the remarkable moustache he now always sports. He walks out to Little Richard’s 1955 hit, Tutti Frutti, works the crowd and loves every moment. He tells me, “The crowd just started eating it up! It works for me. It’s got a few headlines. That’s what boxing is at the end of the day, it’s entertaining.”

That’s not the only thing that sets the Gloucestershire man apart from the crowd though, he’s also served as an active soldier in Afghanistan, come under fire, lost friends and survived. “I smashed my basic training,” he tells Boxing News, citing it as a maturing experience. “They got all the little kid stuff out me from being at school.” After his training, Poochi explained, he was eager to get into the action. “I wanted to go to Afghanistan,” he says, “so I joined the battalion that was going next and got straight out there.” Thankfully he returned unscathed and says that his time in Afghanistan was “definitely a positive experience”.

Van Poetsch then has quite a story to tell, having served overseas before taking up the life of a professional fighter and juggling his boxing and his work as a barber is tough, he says: “Busy. I work full time and obviously I train full time as well. It’s about the balance between work and rest. It’s good though, I enjoy being a journeyman. I’ve fought all over the country and in different countries, it’s good.” His story’s not over yet though and while he’s a proud journeyman, no longer worrying about world titles, he definitely has ambitions within boxing and an infectious love of the sport.

“My ultimate goal is to get to a hundred fights, unscathed, and then go from there really. I haven’t got an exit plan to leave from boxing anytime soon to be honest. I go through phases with boxing, one minute I f****** love it, next I can’t stand it. I hate training, I hate making weight, I hate the process of the fight night, I hate getting my hands wrapped. But I take a few weeks off, recharge my batteries and I can’t wait to do it again then. It’s addictive. It’s like a drug. Getting a bit of money for it too? That’s a bonus.”