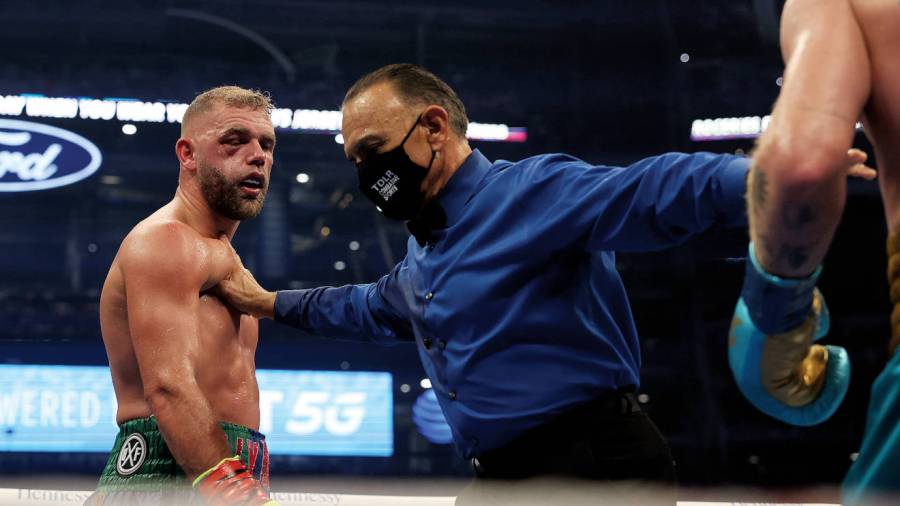 Quit the bravado. Boxers claiming they’d rather be carried out on a stretcher do the sport no favours, reflects Matt Christie after Billy Joe Saunders' loss to Canelo Alvarez

MIDWAY through the eighth round of his fight with Canelo Alvarez, Billy Joe Saunders realised that having the side of your face caved in with a single blow is desperately uncomfortable. When he returned to his corner the suspected fracture in his orbital bone was poked, prodded and later confirmed. At the moment he was pulled out, he made no effort to object to his corner’s admirable decision. And nor should he have done. Retiring from the fight was the only sane thing to do at that point.

The pain he felt is impossible for someone who has never experienced such an injury to describe. Imagine the sensation of a bone beneath your face breaking while more punches hurtle towards you. I can only estimate, but one can understand why it might feel altogether more unsettling than a bad cut or an injured arm or leg. Yet Billy Joe not so long ago presumed that if he was ever to get his skull broken in a fight he would simply brush it off and fight on. He no doubt thought like that because he is a natural warrior. And warriors, remember, don’t quit.

Five months ago, after Daniel Dubois surrendered due to a similar injury sustained against Joe Joyce, Saunders said: “If my two eye sockets were broken, my jaw was broken, my teeth were out, my nose was smashed, my brain was beaten, I was not stopping until I was knocked out or worse.”

He was not the only one; both David Haye and Carl Frampton – two former champions working as analysts for BT Sport – immediately suggested Dubois ‘quit’; something they would never do. But what Saunders came to understand, when faced with a potentially life-altering injury, is that surviving is preferable to “being knocked out or worse”, after all.

The truth is that Saunders, Haye nor Frampton could have possibly put themselves in Dubois’ shoes back then. Yes, they are all fighters so are therefore more educated than the likes of you and I when it comes to commenting on injuries in a boxing match. But I’d argue that such bravado is what makes ‘quitting’ so unacceptable, not the act of quitting itself. The barbaric narrative that essentially expects boxers to fight to the death, or leave themselves forever damaged, does the sport no favours whatsoever. Not only is this notion of self-sacrifice over self-preservation something of an insult to their own families, it’s deeply disrespectful to the families of boxers who are already dealing with the worst consequences of our sport. Furthermore, it gives credence to moronic observers who choose to berate a beaten boxer for doing the right thing by saying enough is enough.

In any other sport, an injury of that magnitude would rightly be regarded as horrific. The athlete would be withdrawn immediately. Yet in boxing, a sport defined by punches to the head, there’s a suggestion that they should continue to take more punches simply because they are boxers. That, when you really think about it, is utterly preposterous.

In the boxers’ defence, they simply have to believe they’re invincible. They are conditioned to show no weakness. But one hopes they now think before they pass judgement on others in an effort to prove their own toughness. The media, in turn, need to stop reporting this nonsense and putting words in fighters’ mouths. If a fighter says they’re willing to die in the ring it doesn’t need to be a headline. When a fighter quits, another one doesn’t need to be asked if they’d have done the same.

The bottom line: When a fighter or trainer decides they cannot continue for a legitimate reason that decision must be respected.

Billy Joe Saunders is okay, thankfully. Whether he’ll ever be the same fighter again is another matter. Very few who are unfortunate enough to encounter such injuries are able to ignore the physical and mental scars. But at least they’re still here and are not another casualty in a long line of boxing casualties. At least their families are not mourning because the fighter’s wish of being carried out on a stretcher was granted.