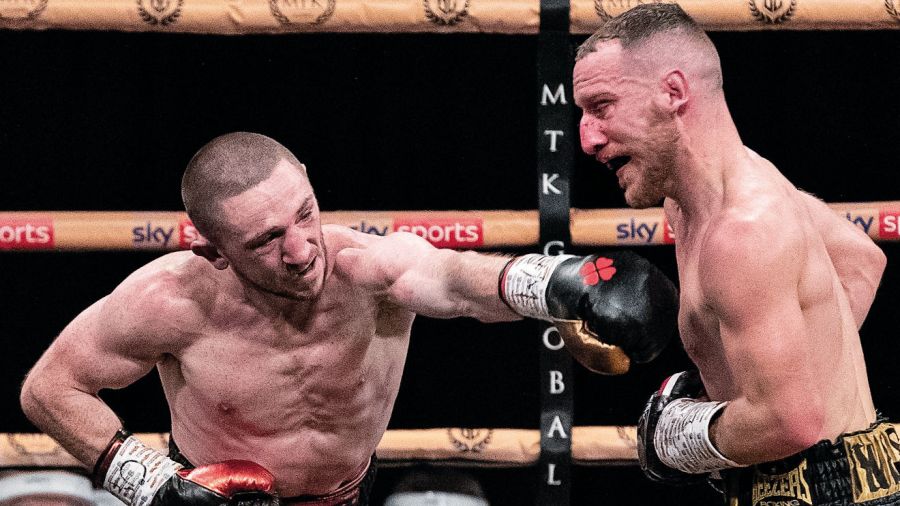 Dickens is out to prove he can still compete at world level while McGrail gets an early step-up, writes Matt Bozeat

THERE are important contests for James “Jazza” Dickens and Peter McGrail at the Olympia in Liverpool on Saturday night (October 15).

This is a fight that should give an indication of whether the 2017 European amateur champion and 2018 Commonwealth Games gold medallist can enjoy similar success in the pros.

British fans may remember Espinoza giving Kash Farooq a hard 10 rounds at the Copper Box Arena last April. Farooq won by two, three and four rounds on the cards and ended the fight cut over both eyes.

The Nicaraguan couldn’t match Farooq for skill and appeared to feel body shots several times, but kept going. He had his moments in most rounds, but the telling punches came from the Scot, who has since had to retire.

Espinoza has boxed twice since that loss, outpointing Yader Cardoza on a majority over eight and retiring after two rounds against the world class Andrew Moloney on the Devin Haney-George Kambosos undercard in Melbourne in June.

The Moloney fight was made at super-flyweight and Espinoza was ruled out with damage to his right eye suffered in the opening round. He took a bit of a hiding that night.

Last time out, McGrail impressed when breaking down Uriel Lopez Juarez in four rounds in April. The Mexican was well known to the Everton Red Triangle gym, where McGrail has been based since he was 10 years old, having been a stubborn opponent for Andrew Cain in Telford five months earlier.

Cain forced a sixth-round stoppage and McGrail got the job done in four.

McGrail is so good at edging his feet in and out of range and moving his upper body and he doesn’t waste many chances to land his own punches. He’s likely to have too much quality for Espinoza. We see McGrail punishing him with counters throughout and forcing the stoppage around the sixth or seventh.

The fights Dickens wants are against Josh Warrington and Leigh Wood. He has a win over Wood, now a belt holder, at the York Hall in February 2020 on a 10-round majority points decision. Dickens beat him as an amateur as well, in the semi-finals of the 2010 ABA Championship.

Only Guillermo Rigondeaux, Thomas Patrick Ward and Kid Galahad (twice) have beaten Dickens in his 31-4 career. The loss to Galahad in their rematch for a vacant IBF featherweight belt last August was a bad one. Dickens was pulled out by his corner after 11 rounds with his left eye cut and swollen and his nose broken.

Steve Bunce described the eye as “one of the worst cuts I’ve seen… a cut like that could end a career” and mentally, Dickens says he struggled to process the result. He had been so confident of beating Galahad.

Dickens decided on a change of scenery, joined Peter Taylor in Ireland and in their first fight together in April, he stopped Andoni Gago, a 36-year-old former European champion from Spain.

Gago is known for being a spirited competitor who’s always in the fight, but so dominant was Dickens, the Spaniard appeared to be losing interest until a cut opened on Dickens’ eye.

Gago started to take more chances and after he over reached in the fifth, Dickens put him flat on his back with a sweetly-timed left uppercut.

Dlamini should put up more resistance.

Four years earlier, Vetyeka had ended one of the longest title reigns in featherweight history by beating Indonesia’s Chris John, but Dlamini was too fresh for the 37-year-old and took a shock majority points vote over 10 rounds, making sure with a strong finish.

Dlamini has since appeared on the Amir Khan-Billy Dib undercard in Saudi Arabia in July, 2019, and trounced untested Filipino Dave Penalosa over 10 rounds, flooring him twice.

He heads to Liverpool having stopped his last three opponents, but we’re not sure he’s going to be good enough to beat Dickens. We go for Jazza to win on points.

The well-travelled Alex Dilmaghani (19-2-1), now with Joe Gallagher in Manchester, tunes up for his shot at British super-featherweight champion Anthony Cacace in an eight-rounder.