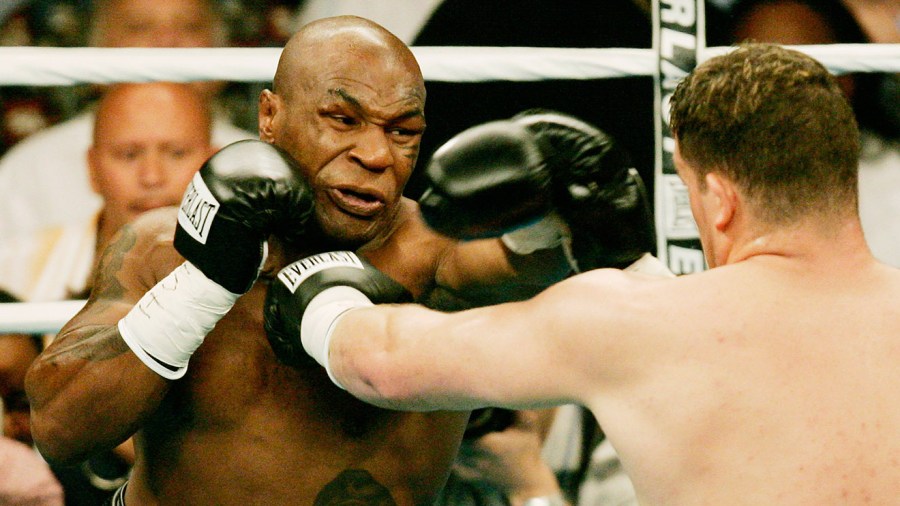 ON June 1, 2019 – the night that Andy Ruiz Jnr shocked the world by beating Anthony Joshua – a large, hulking man, casually dressed with a pleasant demeanour, made his way through the crowd at Madison Square Garden. He didn’t exactly blend in. At 6ft 6ins tall and weighing more than 300lbs, it’s hard to blend. Those who saw him could have been forgiven for thinking that he was a retired NFL lineman.

He’s a nice man, amiable and easy-going, a bit reticent when meeting strangers. But the words flow when he feels comfortable. His name is Kevin McBride. And on the night of June 11, 2005, he secured a place in boxing history. On that night at the MCI Center in Washington, DC, he became ‘The Conqueror of Mike Tyson’. “How long has it been?” McBride is asked.

McBride was born on May 10, 1973, in Clones, a small town just south of the border between the Irish Republic and Northern Ireland. He was 11 or 12 years old – he’s not sure which – when he had his first fight. His opponent was also from Clones and stopped Kevin in 30 seconds. “But I won my next fight,” McBride says. “And I fell in love with boxing.”

At age 19, McBride represented Ireland in the super-heavyweight division at the 1992 Barcelona Olympics and lost in the second round after a first-round bye. He turned pro later that year and came to the United States in 1999 to pursue his ring career. By June 2005, his record stood at 32 wins, four losses, and one draw, with 28 knockouts. He was a club fighter with four KO defeats on his résumé. One of those came against Michael Murray, who lost 17 of his final 18 fights. Murray’s sole win during that stretch was his knockout of McBride.

There was a time when fighting Mike Tyson was akin to being a Christian thrown to the lions at the Roman Coliseum. But by 2005, Tyson was stumbling toward the end of his ring career. McBride’s most important qualification for being chosen to fight “Iron” Mike was that he had virtually no chance of winning. He was marketed to the public as “The Clones Colossus” and viewed as a sacrificial lamb.

When the fighters met for the first time at a press conference in Washington, DC, McBride was in awe of his opponent. “I was going to fight Mike Tyson,” he later remembered. “He had the tattoo on his face like I’d seen on television. He looked larger than life to me. I said to myself, ‘This is really Mike Tyson.’”

At the final pre-fight press conference, Tyson told McBride that he was going to fillet him like a fish, although the consensus was that he was more likely to club him to death like a baby seal. On fight night, McBride was in a decidedly hostile environment. “Everything was about Tyson,” he would remember. “The only people rooting for me were the people in my corner. The crowd was all for Mike. Even the commission was on his side.”

Now, 14 years later, McBride says, “You have to believe you can do it. But then you have to do it. That’s the hard part. To be honest with you; waiting for the opening bell, I was asking myself, ‘What the f**k did I get myself into?’ But I was there. I had to fight.”

Fortunately for McBride, Tyson was a lesser fighter that night than he had ever been before. His timing was off, his defence was non-existent, and his punches lacked power. When the first round ended, “The Clones Colossus” was relieved to find himself on his feet. Then the sacrificial lamb rose up and slaughtered the butcher.

Early in the fight, Tyson tried to bite McBride’s nipple. “That was the scariest thing that happened,” Kevin later recounted. “And he was headbutting, throwing low blows. A couple of times, he tried to break my arm off at the elbow. But as the fight went on, I could see that he was getting tired and frustrated. Finally, I said to him, ‘If that’s all you’ve got, you’re in trouble.’ Near the end, I was cracking him with everything I had, and I could feel the energy going out of him.”

In round six, Tyson was penalised two points for an intentional headbutt, fouled some more, and fell to the canvas in exhaustion. He quit on his stool before the start of the seventh round.

After the fight, McBride needed 17 stitches to close a cut over his left eye that had been caused by a headbutt. His thighs were bruised for days from low blows.

Appearing at the post-fight press conference, Tyson told the media, “I don’t have the guts to be in this sport anymore. I’d liked to have continued, but I saw that I was getting beat on. I just don’t have this in my heart anymore. I’m not going to disrespect the sport by losing to this calibre of fighter. I’m not interested in fighting anymore. I hate the smell of a gym. I hate the boxing game. That guy in 1985, 1986; I don’t know that guy anymore. I’m just not that person anymore. I believed that I was still a fighter, but I’m not. I’m washed up.”

Rock Newman, who had promoted the fight, then told Tyson that he was going to applaud him for his career accomplishments and encouraged those in attendance to join him. But Tyson shut the tribute down, crying out, “No, no, no, no. Sit down. Sit down, please. People have given me enough applause in my life.”

After the fight, McBride went back to Clones. “It was wonderful,” he later recalled. “The whole town stayed up for the fight. Because of the time difference, it started there around four o’clock in the morning. I don’t think the pubs closed that night. I went back to the school that I went to when I was a boy. They had an assembly; all the kids were there. I told them what my father told me. ‘If you work hard and believe in yourself, you can accomplish your dreams.’ All the kids crowded around me, asking for my autograph like I was famous.”

But McBride was unable to parlay his victory over Tyson into bigger and better things. Faced with a higher grade of opponent than he’d fought before, he lost six of his next eight fights and retired in 2011. He now lives with his wife, 14-year-old daughter, and 11-year-old son in Dorchester, Massachusetts, where he works for a company called Horticare Tree Preservation, planting, pruning, and cutting down trees.

“The last time I saw Mike was at the Hall of Fame ceremonies last year,” McBride recounts. “I didn’t know if he recognised me, so I went over and said, ‘Hi, Mike. I’m Kevin McBride.’ He looked at me and said, ‘I know who you are.’ Then we shook hands, but that was all.”

And what does McBride think of today’s heavyweight scene? “I wish I was 10 years younger,” he says. “That’s for sure. I like watching the heavyweights. And I’m a big fan of [unified women’s lightweight champion] Katie Taylor and Aaron and Stephen McKenna [two Irish-born fighters currently plying their trade in the United States].”

“It’s such a great sport, boxing,” McBride says in closing. “It’s a sport where dreams can come true. I know what it’s like to have dreams and be laughed at; to be a huge underdog and then pull off the upset like Andy Ruiz did against Anthony Joshua. I’ve been there. You know, Muhammad Ali was there the night I beat Tyson. I met him after the fight. So in one night, I beat a legend and I met the greatest legend of all time. It was the greatest night of my life. Sometimes, I still can’t believe it happened.”

Thomas Hauser’s most recent book – Protect Yourself at All Times – was published by the University of Arkansas Press. In 2004, the Boxing Writers Association of America honoured Hauser with the Nat Fleischer Award for career excellence in boxing journalism.

Thomas Hauser has authored 50 books on subjects ranging from professional boxing to Beethoven. His most celebrated work is <em>Muhammad Ali: His Life And Times</em> - the definitive biography of the man who was once the most famous person on earth. The British edition was honoured with the William Hill Book of the Year Award. Hauser's first book – <em>Missing</em> – was nominated for the Pulitzer Prize, Bancroft Prize, and National Book Award, and served as the basis for the Academy-Award-winning film starring Jack Lemmon and Sissy Spacek. Subsequently, he co-authored <em>Final Warning: The Legacy of Chernobyl</em>, which secured his reputation as a responsible and reliable social critic. The film version of <em>Final Warning</em> starred Jon Voight and Jason Robards. Each year, the University of Arkansas Press publishes the articles that Hauser has written about boxing during the preceding 12 months in book form. In 2004, he was honoured by the Boxing Writers Association of America with the Nat Fleischer Award for Career Excellence in Boxing Journalism.