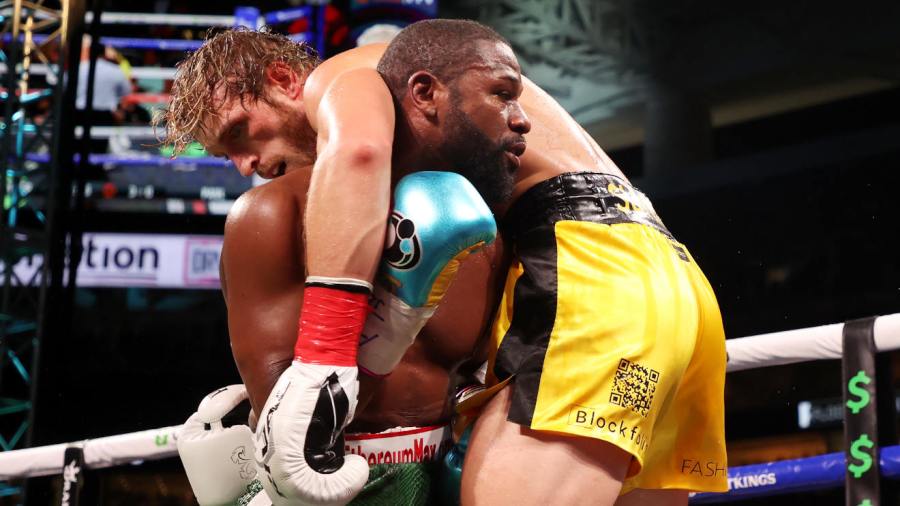 'When it comes to legalised bank robbing I’m the best.' With his exhibition against Logan Paul, Floyd Mayweather once again has the last laugh

IF Floyd Mayweather didn’t care about his exhibition with Logan Paul, should we? The notorious Youtuber, Logan Paul has a following but had never previously boxed a fighter and is not going to be mistaken for much of a boxer even after eight rounds in the ring with Mayweather on Sunday night (June 6) in Miami, a showcase that wasn’t scored, didn’t produce a stoppage or have a winner and loser. In terms of their bank balances, judging by the general interest in this episode, both Mayweather and Paul came out of the experience just fine. Is that problem?

Only in so far as a retired superstar and a social media entertainer appears to have drawn the kind of audience that would make elite boxers blush. It reminds the real sport that when compelling personalities, like them or not, are put in a boxing ring, those elements generate an uncommon source of interest. There is a warning there. Boxing could have plenty of big fights if it made them. Tyson Fury and Anthony Joshua aren’t the only ones who haven’t sorted out an obvious superfight between themselves, but they’re the latest, biggest example of the kind of sport that we could have. The absence of fights like that leaves a vacuum. Into that void come events like Mayweather-Paul.

Who are the victims? Anyone who tried to wager on it was probably ill advised. But presumably Showtime and Sky Sports wouldn’t have bought in to this if they weren’t going to get some serious return on the their investment. Neither entity is a charity anyway.

Paul got made to feel like a fighter. A little humility about the realities of being a boxer wouldn’t go amiss, but then he didn’t his build his platform on Youtube by being self-effacing. Mayweather might have given up a bit dignity by indulging in this exhibition. No doubt he views that a very small price to pay for it. Money Mayweather has lived up to his name yet again and that is no surprise.

The boos in the arena suggests the live audience didn’t feel they got their money’s worth. But they can’t say they weren’t warned.

Given that Showtime has a contract with Jake Paul, Logan Paul’s brother, another Youtuber turned fight sport entertainer, these zany displays will likely continue. But how much more of a part Floyd Mayweather will continue to have in them is hard to see. He certainly has no intention of being in a real fight again.

Even Floyd Mayweather is getting old. He knows it. Not that he needed to here, he couldn’t have trained properly for a contest. At 44 years old his body now needs rest days more than training days. It might have been preposterous but Mayweather evidently is making sure he takes more from boxing than it takes from him.

“At the end of the day, I’m the smart one,” he said afterwards. “They say Floyd isn’t looking like he used to look. My bank account is looking better each and every day. And I’m not coming back to the sport of boxing. Absolutely not. I did what I had to do. I made my mark on the sport. I got all my faculties.”

“They say it’s not all about the money. Well, your kids can’t eat legacy. They can eat off the currency,” he continued. “It wasn’t a real fight, that’s like some sparring in the gym… When it comes to legalised bank robbing I’m the best.

Proper boxing isn’t getting the attention it deserves because the best fights aren’t getting made. If anything Logan Paul reminds us that attention is money. And Floyd Mayweather shows that, if it needed to be said, Money is money.