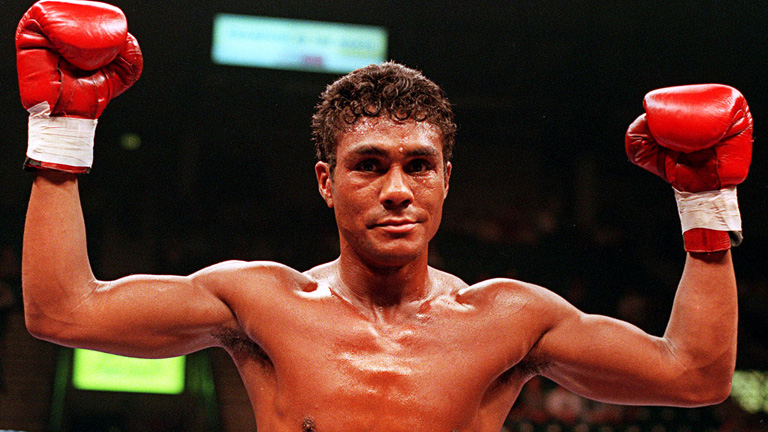 From sexual and domestic abuse to fighting Felix Trinidad, Kevin Lueshing has a story worth telling

A DIFFICULT upbringing is almost a rite of passage for boxers. Their tough experiences are inextricably linked to the arduous career path they choose, and compel them to push their minds and bodies to the limit in this cruellest of sports.

For Kevin Lueshing, however, boxing was an escape from the abominable trauma he suffered as a child.

His father, George, regularly beat him, usually with a belt or – sometimes – with heavy-duty jump leads.

At the age of 10, he was groomed and sexually assaulted by a paedophile he refers to as Derek. The abuse lasted for a number of weeks, culminating in Derek attempting to rape Kevin.

Lueshing never spoke about either of those things during his boxing career but now, at 48, the former British welterweight champion has written a harrowing account of how his childhood was taken from him in the most sickening of ways.

He teamed up with Mike Dunn to write The Belt Boy, the 263-page detailed and brutally honest story of his life so far.

“I’m revisiting places I haven’t for a long time but, having said that, I know what to expect,” he told Boxing News.

“It’s not so much me not wanting to talk about it, it’s just that I find it uncomfortable sometimes. But I know that’s part and parcel of what I’m doing.

“I’m happy it’s out. Talking about my childhood, the abuse, it’s something I’m not ashamed of because I’ve been through counselling. There was a woman in America who worked out of a kind of spiritual shop and she counselled me and told me I shouldn’t be to blame. She took away the dirtiness, the seediness and the guilt I felt. Talking about it [the sexual abuse] isn’t really hard, talking about the beatings I got from my dad is a little bit harder because it’s more personal.”

It took Lueshing roughly a year to finish the book, and while he admits those 12 months were trying, he never lost sight of the necessity of casting light on what he endured.

He found encouragement from other boxers – such as Sugar Ray Leonard, also a victim of sexual abuse – who have written about the appalling contexts they were formed in.

“Having said that, when I was a child I read a lot of books,” he continued.

“I’ve read Mike Tyson’s, Sugar Ray Leonard’s books. They had the same issues and I began to realise that most fighters have some kind of threshold for pain, a familiarity with pain so that it’s normal to them.”

In the book, Lueshing explains that he experienced “no love” and “no compassion” at 101 Clockhouse Road, Beckenham, south-east London; his childhood home.

On a backdrop of racial prejudice, Kevin, who suffers from dyslexia, struggled at school and found himself shunned and punished by his teachers. The other authority figure in his life, his father, is a man he describes as “evil.”

George, a substance abuser, lorded over Kevin and his siblings with an iron fist, handing out vicious beatings whenever someone stepped out of line.

Kevin explains in the book that he only ever called his father ‘dad’ when he was begging for mercy during a beating. It never worked.

When he was nine, Kevin made several attempts to take his life by jumping in front of moving cars, just so he could escape the wrath of his father. He admits that his nine-year-old self had no idea what suicide was, he simply knew that death would release him from George’s clutches.

Such gut-wrenching admissions come thick and fast in Belt Boy, and Lueshing hides nothing. His description of one particular beating from his father begins the whole book – the chapter is entitled ‘Blood in the Snow’.

At 10, Lueshing was suspended from school just before the Christmas holidays, but did not tell his parents out of fear of what his father would do. He pretended to go to school each day but instead would hang out at the local park.

When his father eventually found out, Kevin escaped to his grandmother’s house to seek refuge. His father followed, and dragged him back home. He stripped the 10-year-old Kevin to his underwear and forced him into the back garden, where he battered his tiny, defenceless body with jump leads.

“That’s the most horrific thing I’ve ever been through in my life. That’s hard to talk about. I try and visualise it and I think, ‘Did that really happen?’” Lueshing said.

“But it’s printed into my subconsciousness. That can never be erased from my memory, just like me fighting [Felix] Trinidad can never be, or fighting Chris Saunders. It’s a deep scar.

“Talking about the beatings to other people, they think it’s obscene and horrible but as a kid, it was just normal. It was all I knew.”

Lueshing only became aware of the inevitable impact of those beatings in later life, long after he had retired from boxing.

His father, before a beating, would make Kevin go into the bedroom and make the tortuous choice of which belt he was to be struck with.

Now, Lueshing is acutely aware of how the dread which filled him as a child when he made his way up the stairs of 101 Clockhouse Road to select his father’s weapon affected him as a boxer.

“I couldn’t shake off that fear that my dad instilled in me,” he admitted. “I always carried this anxiety, every time I stepped into the ring it was the same fear I felt when my dad told me to go upstairs to get a belt for him to beat me with. I didn’t realise that’s what it was until I retired.

“I’d walk home from school down my road and be scared that my dad was in. Walking to a ring, you know what’s coming. It was the same with my dad when he told me to get a belt, walking up the stairs to get it terrified me.”

Just months after that horrendous beating in the snow, Kevin started doing the local paper round, which is when he met Derek.

Derek helped organise the rounds, and Lueshing writes about how this kind old man took a shine to him, had more interest in him than his own parents.

As he puts it: “Derek’s attention was better than no attention.”

Lueshing’s account of the grooming process, the innocent thoughts that filled his mind as Derek plied him with sweets and comics, is terrifying.

Lueshing had no idea of the depravity of what Derek was doing to him, and so he kept returning to his house. Derek would pay him £2.50 for each visit, during which he would perform sexual acts on Kevin, and the 10-year-old would just think about what he could spend the money on. Chocolate, the latest issue of The Beano, a trip to the cinema. Kids stuff.

Then, during one visit, Derek tried to rape Kevin, all the while whispering into his ear that, “It’s alright, nothing’s going to hurt. Don’t worry, you’ll really like it.”

Lueshing resisted, getting the attention of Val, the old lady who owned the decaying building Derek lived in. As Derek went downstairs to calm her down, Kevin escaped and never saw the man again. He believes he is now dead.

Speaking about his decision to only reveal the story now, Lueshing said: “I was tempted to speak about it earlier, but I spoke more about my father, rather than the sexual abuse. I didn’t want people to feel sorry for me. Who would want to fight a sexually abused boxer? It’s not a subject of conversation that you start an interview with. It was never going to work.

“I knew it wasn’t the right time to talk. It was for the right reasons. How can you talk about something like that in a macho sport like boxing? I had children as well, it would have been hard to explain it to them and it would have distracted people away from my boxing.”

The section of the book detailing what happened with Derek makes for extremely difficult reading.

It is also essential reading.

According to the NSPCC, 24 per cent of young adults have experienced sexual abuse (contact or non-contact) as a child. One in 20 children are sexually abused (contact), and one in every three children suffering sexual abuse do not report it at the time.

Lueshing’s story is not an uncommon one – indeed, the NSPCC believe that a disrupted home life makes a child more vulnerable to sexual abuse – but it is rare for a victim to be so brave in their admission of what they suffered.

That Lueshing was a prominent boxer, a profession in which not many admit to vulnerability, makes his honesty all the more remarkable.

As he explained: “When I was a kid we were scared to talk to people because no one would believe us. I said to him, ‘Don’t worry Derek, your secret is safe with me. Who would believe me?’”

Society is much more aware of the problem nowadays, something Lueshing is thankful for, and the NSPCC has seen a sharp rise in reports of sexual offences against children in recent years – there were 36,429 in 2013-14.

While that figure is alarming, it also conveys that more people are spotting the issue and speaking out. However, there is still a serious stigma attached to sexual abuse.

Towards the end of our interview, Lueshing revealed that since the release of his book three different men have approached him and spoken about similar experiences. All three made him promise he would not say a word about who they are or what happened to them.

Lueshing’s suffering took its toll, and growing up he went off the rails. He bullied other kids, was expelled from school, stole and didn’t stop selling drugs until he won the British title in 1996.

He began boxing simply as a way to keep himself out of the house and away from his father, but it turned into a love affair which would ultimately give him a reason to keep going.

“It upsets me when people say they’re only in it [boxing] for the money, it’s wrong,” he mused.

“Boxing saved me. I would have boxed for a penny for the British title. Boxing changed my life, I wouldn’t be here if it wasn’t for boxing.”

The NSPCC – who will receive every penny Lueshing makes from his book – do incredible work for vulnerable children.

There are tens of thousands of children suffering abuse in the UK today, be it physical, sexual or over the Internet. Many won’t have an outlet like boxing, but in Lueshing they have an example of how to rise above the horror and speak out.