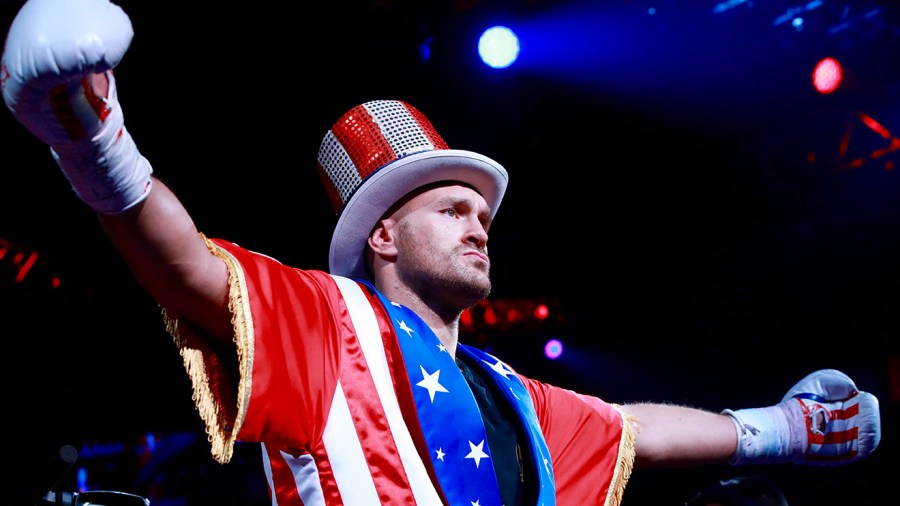 Tyson Fury puts on the style in and out of the ring as he crushes Schwarz. Declan Taylor reports from Las Vegas

AS Tyson Fury and his wife Paris made their way to the MGM Grand on Saturday afternoon, past the dozens of billboards from which the Gypsy King’s giant face stared down, he was finally able to take it all in after a week of playing the main protagonist in the Mecca for all showmen. “I was in the car on the way to the venue with my wife,” Fury said. “I turned to her and said, ‘I think we made it, Paris’ and she asked ‘Why?’’ I said ‘Because we are headlining in Vegas. This is it.’”

Although the sentiment is understandable this was, in fact, only the beginning for Fury, who is slowly but surely laying the foundations on an almighty 30-month manoeuvre which might just make him the biggest star in the boxing world.

So impressed were broadcasting behemoths ESPN by Fury’s miraculous 12th-round recovery against Deontay Wilder on December 1, not to mention the supporting fanfare, that they offered him around $100m to be the face of their boxing output.

First stop, of course, was Las Vegas, although the selection of Tom Schwarz, undefeated and highly ranked so he was, meant that this promotion had to be about more than just the violence in the ring, which was only ever going to be one-sided.

It proved exactly thus, as Fury tore through Schwarz, leaving him bloodied, beaten and stopped after just 5 minutes and 56 seconds in the MGM Grand Garden Arena. The 9,012 who had snapped up the only available tickets genuinely loved every second.

In terms of boxing in America, this was not his first rodeo but the 30-year-old had never topped a bill in Vegas or even set foot in Nevada before he headed here for the final part of his training camp a month ago.

‘I think we’ve made it. We are headlining in Vegas. This is it’

But given his eccentric personality, loud suits and comedy madman shtick, this corner of the desert has always seemed like somewhere the 6ft 9in heavyweight might prosper. And like he did in the ring, Fury delivered on the showbiz requirements outside it too.

He entered the ring flanked by Las Vegas showgirls dressed in full Apollo Creed, Rocky IV garb while James Brown’s Living In America played. It was both obvious and inspired and the crowd genuinely lapped it up. Then, once was the pain was over for Schwarz not six minutes later, out came the microphone again for Fury to serenade Paris with Aerosmith’s I Don’t Want to Miss a Thing, as he did after beating Wladimir Klitschko in 2015.

This whole fight was an attempt by Bob Arum to further build Fury’s profile in America ahead of an anticipated rematch with Wilder. And, in terms of PR, things really could not have gone any better. This clash was the final act in a four-week period during which the world’s three leading heavyweights all fought.

Wilder crushed Dominic Breazeale in 137 seconds on May 18 and then Anthony Joshua’s world collapsed two weeks later in New York City. The third and final act, however, was as close to perfect for Fury as he could have hoped under the circumstances.

“A couple of weeks ago we saw a British fighter travel to America and he looked like he didn’t want to be in there,” Fury said afterwards. “Tonight it was Tyson Fury in Las Vegas. It doesn’t get any bigger. This is the biggest thing that has happened in my career – topping the bill at the MGM Grand.”

After the ringwalk fun, Fury set about Schwarz as an orthodox and controlled a reasonably straightforward opener, landing a couple of hooks while nullifying his shorter opponent who marched towards him, hands up, for most of the round.

Out he came for the second in southpaw and the success came far more easily. At one point Schwarz thought he was having success with a series of hooks which left Fury backed up in a corner, only for the Englishman to turn him round and get to work himself.

Any remaining confidence Schwarz might have had would have drained away as he unloaded with seven punches only for Fury, hands down and against the ropes, to slip and slide out the way of every one of them. Schwarz, for his trouble, then got a horrible uppercut to the solar plexus and a smile from Fury on his way out.

It was then not long before the end came as Fury backed Schwarz into the ropes and opened him up by hooking off his southpaw jab before crashing a straight left hand through the middle. The jab which ended the combination sent the Magdeburg resident crumbling to the canvas.

He was up in time but soon found himself trapped in the corner, gloves around his ears, shipping hook after heavy hook. The towel was already flying in when referee Kenny Bayless waved it off.

The onslaught had taken a heavy toll on Schwarz’s bloodied face and Fury’s trainer Ben Davison bounded straight over to the vanquished visitor to console him. It was not long before Fury was there too, embracing Schwarz and kissing him on each cheek.

“I felt this was my coming-out party,” Fury added. “I had to lose 147lbs for the December fight, maybe I shouldn’t have taken that fight after only two bum fights coming back.

“But this time I had enough training, I was strong, I was fit, I was ready to put on a show. I wanted to show a few things to the American public to introduce myself properly. I showed my skill.

“I didn’t come here to be deadly serious and have a fight because nobody is really interested in that. It’s another boxing match, we’ve seen a thousand before and I’m sure we will see another million through history.

“It’s the character, it’s things people don’t do. I don’t take myself that seriously. I was a chubby guy who comes and has fun. I’m relaxed, I don’t worry about fighting it is bred naturally in what I do. I enjoyed the ring walk, I enjoyed the build-up.

“I am more active now than I’ve ever been in my career. I always wanted to stay active. I’m out again soon so looking forward to that as well.

“It’s only the start, you’re going to see much more of Tyson Fury on US soil.”

Indeed, October 5 appears to be the most likely date for Fury’s next outing, with a fight at Madison Square Garden the next box on Fury’s bucket list set to be ticked off. As such, Fury insists he will not be out of the gym for too long now while promoter Frank Warren believes an opponent could be rubber-stamped within the next fortnight.

Drug abuser Jarrell Miller, who is expected to return to the ring at some time around October, is one name in the frame while the likes of Kubrat Pulev and Adam Kownacki have also been floated. Provided all goes well, and Deontay Wilder gets past his Luis Ortiz rematch unscathed, Fury and Wilder are expected to meet again early next year.

Fury said: “Wilder is coming. This fight is going to happen. There were three horses in the heavyweight division and then there is only two. I already beat him once but I will beat him again, and again and again. It is heavyweight boxing and anything can happen, but I think my style is kryptonite for anybody unless I get knocked out.

“I think it is the biggest fight in world boxing barring none. It’s the biggest fight you will see for years. I don’t think you can see anyone else coming up and being bigger. Two unbeaten heavyweights, lineal champion, WBC champion, fighting in their prime, it doesn’t get any bigger than this. The division is back and on fire.”

In the chief support, Philadelphian Jesse Hart dropped Sullivan Barrera and broke his hand en route to a clear decision in their light-heavyweight 10-rounder. Hart controlled large portions of the fight and couldn’t seem to miss with his long right hand, although Barrera appeared most dangerous when he got hurt, which was worryingly often. The Cuban, now 37, has had some long, hard fights in his career, including 12 tough rounds against Dmitry Bivol and it looks like it all might be catching up with him. Even so, he played his part in an entertaining but often messy tear-up with Hart, who got the nod from all three judges. Eric Cheek had it 99-90, Steve Weisfeld 96-93 and Tim Cheatham 97-92. Jay Nady was the referee.

Top Rank’s female hope Mikaela Mayer moved to 11-0 thanks to a lopsided 10-twos victory over Bolivia-born Argentinian Lizbeth Crespo. The 2016 Olympian from California had a harder fight than the wide scorecards suggested but used her height advantage to catch and counter with well-timed left hooks to head and body. Max DeLuca’s 100-90 in Mayer’s favour was extremely harsh on Crespo while Glenn Trowbridge’s 99-91 was not much better. Lisa Giampa completed the scoring with 98-92 and Russell Mora reffed. Mayer, 28, is now hoping to fight for a super-featherweight world title shot in her next outing.

Fury’s training partner and close friend Isaac Lowe of Morecambe made no mistakes en route to a unanimous decision victory over Wisconsin’s Duarn Vue. The switch-hitting “Westgate Warrior” Lowe, who retained his WBC International featherweight title, was awarded a 99-91 score by Trowbridge, 98-92 by Robert Hoyle and 97-93 by Weisfeld, while More was in charge.

In the battle of undefeated prospects, Albert Bell earned a hard-fought 10-round victory over the always-game Andy Vences of California. Bell, of Ohio, was floored hard by an accidental headbutt in the third round but recovered to box his way to a 97-93 victory on all three cards. Tim Cheatham, Richard Ocasio and Eric Cheek were the judges while Weeks took charge.

The two heavyweight prospects, who both sparred Fury during his camp, chalked up stoppage victories on the undercard to maintain their perfect starts. Philadelphia’s Sonny Conto moved to 3-0 by stopping Youngstown man Daniel Infante via stoppage six seconds before the end of the second. Earlier, Guido Vianello did the damage in the same round as Conto, with Louisiana’s Keenon Hickman dropped three times before Weeks waved him off after 2-22.

California-based German Cem Kilic stopped Illinois man Martez McGregorafter 1-45 of the eighth and final round of their contest, which was overseen by Weeks after an entertaining action fight.

Hamburg heavyweight Peter Kadiru, meanwhile, had to settle for a points victory after four rounds against Texan Juan Torres. All three judges scored it a shut-out to Kadiru after a fight that Nady took charge of.