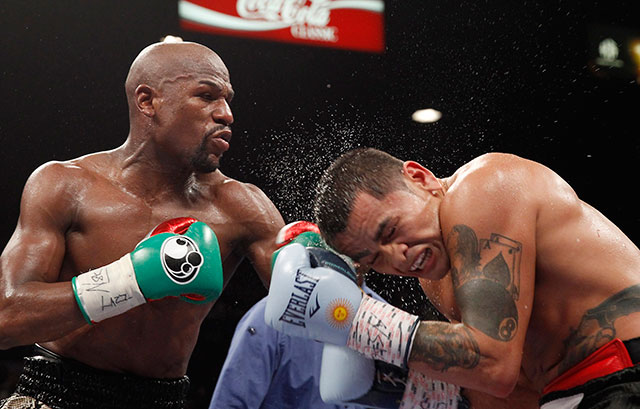 The Good:
FLOYD MAYWEATHER turned in a polished performance, and beat Marcos Maidana more comfortably this time. The Mayweather haters – and there are plenty of them – may wonder why this is good news, but for as long as Floyd is at the top, riding his unbeaten record into every fight, the healthier the sport will be. No one, Manny Pacquiao included, can generate the interest in boxing that Floyd can. And whatever one’s opinion on Floyd the human being, they should not attempt to deny his brilliance as an athlete. His dedication and talents should be admired. Quite simply, he is one of the greatest athletes of this century.

IT can be argued that Mayweather’s victory was also good for the aforementioned who are craving his first defeat. Although there was no question he was the better man, there are signs that he is gradually slowing down, so anyone desperate for “Money” to come unstuck, will remain engrossed in the superstar’s incredible journey for as long as it lasts.

DUE to Mayweather’s status as sport’s richest, and most invincible, each of his fights are huge events. Thousands queued – some for 12 hours – to watch Mayweather disrobe and plonk his ripped frame on the scales on Friday afternoon, and over 16,000 were in attendance come fight night. The 37-year-old turns the MGM Grand into one massive Mayweather party when he’s fighting there, and both Floyd and promoter’s Golden Boy, deserve credit for that.

The Bad:
REMATCHES should only occur when the first fight is outstanding, controversial, or a major upset. The first Mayweather-Maidana scrap was none of those, and as a result, the sequel struggled to create the buzz of previous Mayweather events. Although well-attended, there was no real intrigue about the outcome. The return was far from dull, but it told us nothing new, and will do nothing for Floyd’s legacy. It’s easy for us to sit back and have a pop at Mayweather for taking this fight, there is no doubt that those that do would also take the cash and run – I know I would. However, looking at the fight from a historical standpoint, and when you consider Mayweather only has perhaps two or three outings to run, facing Maidana again was a waste of a fight.

REFEREE Kenny Bayless’ performance left a lot to be desired. His obvious confusion at the ‘bite’ in round eight and his failure to get to the bottom of what had just happened were not the actions of the top class official he normally is. The fact that no one else knew what had gone on, apart from Mayweather and Maidana, would not have helped the investigation, but merely allowing the fight to continue at that point did not instil confidence in his authority. Deducting a point from Maidana later in the fight – for a shove that did not deserve punishment – only underlined the incompetence on the night. All that said, it was a freak occurrence, and we all have bad days at the office. Bayless, therefore, does not become a poor official overnight.

MAIDANA should not escape without any blame. After all, he is the man who bit down on his opponent. And whatever the result of a bite, be it a chunk of ear being hacked off, or – in Mayweather’s case – numb fingers, it is a dreadful act in any sport.

THE top end of the undercard was poor. The Mickey Bey-Miguel Vazquez contest was mind-numbing, and the decision controversial. Leo Santa Cruz-Manuel Roman looked like a mismatch from the outset, and it proved to be. Considering Mayweather-Maidana II was not expected to be overly competitive, the Pay Per View undercard should have been so much better. However, there was enjoyment to be had further down the card and most of the early bouts were well matched.

The Ugly:
MAYWEATHER’S behaviour in fight week was erratic. The fighter is facing new accusations of domestic abuse from another ex-partner, and was invited to talk about new CCTV footage of disgraced NFL star Ray Rice knocking out his girlfriend in a lift. His comments, that were of the “lay off him, it wasn’t that bad” variety were deeply concerning, largely unforgivable, and he was rightly criticised by various media outlets for them.

THE MGM Grand must address the problem of stampedes at the end of events. Although the public charge at Mayweather-Maidana II did not match the ferocity of what went on after their first bout, it illustrated a worrying trend could be developing. Again, the stampede occurred outside the Media Centre where the press conferences occur. The room – that is clearly labelled throughout fight week – is clearly intriguing to members of the public hoping to catch a glimpse of their heroes. It is situated in an area of corridor that bottlenecks, and consequently, any attempt to charge into the centre causes chaos.

What next:
MAYWEATHER remains the number one star in boxing, but the public, surely, will not buy another fight like this. He is clearly still an outstanding fighter, and one who must only fight opponents who are deemed a test, and he must seek out the best available. Guys like Manny Pacquiao, Gennady Golovkin, and Amir Khan. Beating more Maidanas would be like the No.1 tennis star suddenly refusing to play in any Grand Slam events, while declaring his greatness because he is unbeaten in minor tournaments.

The pound-for-pound leader made encouraging noises about taking on Pacquiao immediately after the fight, but under pressure from the media at the press conference, he refused, over and over again, to offer any encouragement about that fight ever happening. Also, Amir Khan – in Vegas to talk up his hopes of challenging Floyd – may not have done his chances any favours by publicly saying that Mayweather is in decline. Ultimately, Mayweather has been calling the shots for a long time, and it is he, and only he, who will decide what happens next. Goading him does not work.

Forget about Golovkin. Don’t rule Pacquiao out completely, but Miguel Cotto – who Floyd outscored in 2012 – could be the frontrunner following his recent reinvention as world middleweight king. Although the Puerto Rican is the least appealing of the quartet, largely because he has been beaten by Floyd before, the fact Mayweather could win a belt at 160lbs makes the contest an improvement on his most recent outing.