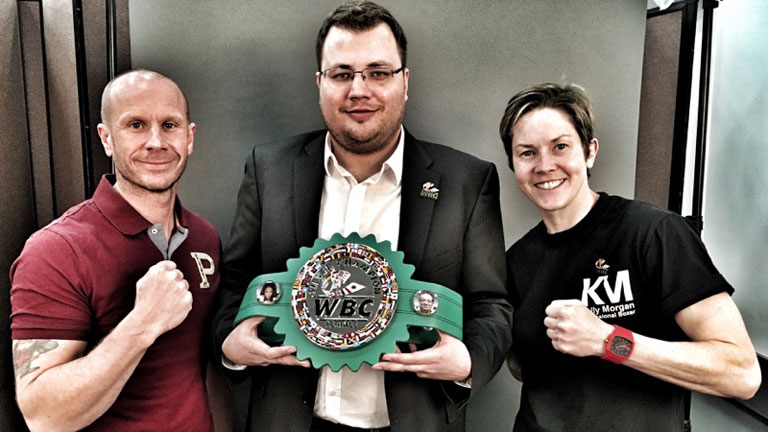 SWINDON middleweight Kelly Morgan – nicknamed “Boxing’s GI Jane” following her 10 years in the British Army, including a stint in the demanding Physical Training Core – could become a world champion just 16 months after her pro debut. Morgan turned over last July and can boast only a brief amateur career. But, after being forced to fight at super-welterweight to get her first three bouts (all wins), Morgan has been awarded a WBC Silver title shot in her natural division – on March 12 in her hometown – and could challenge for the full title in November.

“The opponent is not 100 per cent, we are waiting for her visa to be confirmed but it will probably be the Georgian, Elene Sikmashvili,” Morgan, freshly returned from the WBC’s second Female Convention, revealed to Boxing News. “I was due to box her in my second fight but her visa didn’t come through. There’s limited footage of her but it’s her experience against my grit and determination.

“The vacant full title will be decided in New Zealand on April between Kali Reis and Maricela Cornejo, and the winner of my Silver fight will meet the winner of the world title fight. We’re looking at November, we’ll be gunning for that. I met a couple of boxers at the convention who have boxed Kali Reis and they said she was strong and underrated, a good hitter, a good boxer. Reis is the favourite for the word title fight.”

Morgan spent six days at the convention in Tijuana, her and trainer Rich Farnan [left in above image] meeting WBC Female Championship Chairman Malte Mueller- Michaelis during an exilerating period where female boxing was brought to the fore.

“There were 11 world champions there including Nikki Adler and Ava Knight,” Morgan enthused. “It was great to meet all the girls and feel that shared passion; you think you are on your own but we are all feeling the same way. It was phenomenal, a lot of talk about how the female sport is being pushed forward.”