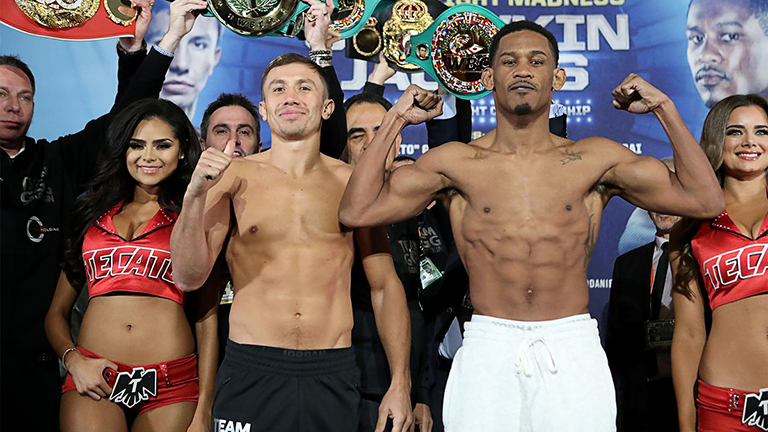 “They’re both very good finishers in different ways and styles. I expect it to be explosive. If Jacobs tries to box, Golovkin won’t let him. I’d say “GGG” is probably the best pressure-counter-puncher there is. Very early on, I think he’s going to make Jacobs stand and trade with him. When he does that, it’ll all go off.”

As well as anticipating an entertaining firefight between Golovkin and Jacobs, Booth also agrees with the general consensus that Jacobs represents the toughest test of Gennady’s career so far.

While Booth will be a keen observer of the Golovkin-Jacobs clash, his main focus this weekend is on his own fighter, the aforementioned Andy Lee, who faces KeAndrae Leatherwood in an eight-rounder on the undercard at MSG. Lee, a former WBO middleweight champion, has been out of the ring since losing his belt to Billy Joe Saunders – who coincidentally is now coached by Adam too – in December 2015. Booth feels that the extended layoff may well have benefited his charge in the long run.

“Andy’s had a lot going on in his life outside the ring – all good stuff,” said Booth. “I know it can be a bit of a cliché, but it’s true that a rest can rejuvenate you. We’ll know after the fight whether it has or not. What I will say, with conviction, is that he seems in a really good place. He’s got a nice spring in his step – he’s happy to be here in New York. He’s done his work, so now we’ll see how he gets on.

“With the Saunders fight, we did about three training camps because of the postponements, so it just all became so long, negative and laborious. It was a bit of a painful lesson regarding the problems that can occur when fights get delayed like that. Having been away from the ring for a while, he definitely seems a bit more enthusiastic now. There’s no pressure there.”

Rather than come in slightly over the division limit – as is often the case in lower-profile non-title bouts – Booth and Lee decided beforehand that it was important to make middleweight, just in case an unexpected opportunity presented itself.

“It was always the plan for Andy to come in at 160lbs on the dot,” Booth revealed. “With the ‘GGG’ and Jacobs fight taking place on the same card, there was always a chance that one of them could’ve got injured. We knew if that had’ve happened, they would’ve turned straight to us to step in. Even if there was only a five percent possibility that that might happen, it made sense to make sure Andy came in at 160lbs. It also shows a professional attitude as well.”