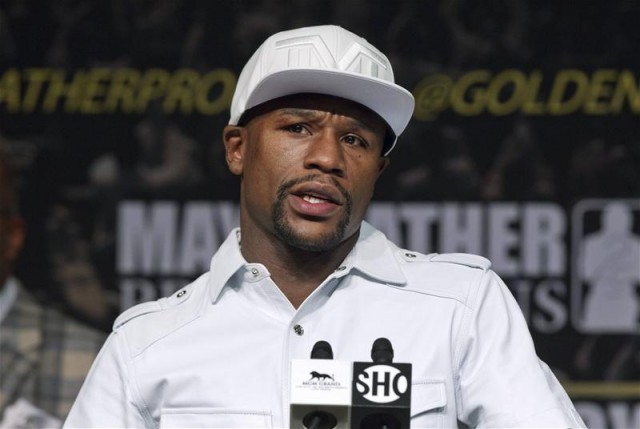 After a significant meeting while the fight was being made, Floyd Mayweather and Manny Pacquiao meet again on Wednesday for their first press conference, writes John Dennen

ON Wednesday, March 11 Floyd Mayweather and Manny Pacquiao will come face-to-face once again at the only press conference scheduled in the build-up to their May 2 mega-fight.

Stay with Boxing News Online to watch the press conference live at 1.30pm in Los Angeles, 8.30pm in the UK. CLICK HERE.

The two principles have met before. As the negotiations between their respective teams inched towards their conclusion, both Mayweather and Pacquiao were spectators at a Miami Heat basketball game. They spoke, exchanged numbers and met privately afterwards. It was a telling moment. Stephen Espinoza, Executive Vice President at Showtime, Mayweather’s broadcaster, described it as “one of those fortuitous coincidences that we probably could never have planned but we’re very lucky to have happened. I wouldn’t say that the deal wouldn’t have happened without that but it certainly wouldn’t have happened as quickly and possibly wouldn’t have happened at all. But I believe that the direct line of communication between Floyd and Manny cleared up a lot doubts in both of their minds and renewed their commitment to getting this fight done”.

That meeting was just one element in a complex, tortuous process. HBO Sports President Ken Hershman explained, “It required a consensus among everybody. Everyone was working really hard and in good faith to get everything done. There was no hold up on one end or the other. It was really all simultaneous. I think what it shows was that everybody was truly motivated to co-operate and make concessions that they found uncomfortable, at times difficult to come to that place, and that’s the sign of a fair deal. Everybody compromised. Everybody compromised at the right time. It’s really a credit to Floyd and to Manny that they pushed their respective teams and networks to get this done.

“We look forward to that spirit continuing until May 2. And then we’ll go back to our regular day jobs after that.”

Espinoza considers the essential component in bringing about Mayweather-Pacquiao, at long last, was the intervention of Leslie Moonves, the chief executive of CBS. Showtime is a subsidiary of CBS. “I think really one of the main reasons this deal got done when the other ones didn’t was Leslie Moonves as part of the process. He was deeply committed to making this deal. This is someone that all parties in this negotiation respected and he was really the catalyst for seeing this through. He refused to take no for an answer from any side. He was there making sure that the parties came together in a successful and a co-operative manner,” Espinosa said.

HBO and Showtime working together to screen a fight is rare but not unprecedented. The networks did the same for Lennox Lewis-Mike Tyson 13 years ago. But even that couldn’t serve as an exact template. For Hershman it was more a “real good road map”.

He continued, “I think it showed, number one, that this can be done successfully. There’s a lot of mechanics that go into this when two networks are working together. And those mechanics carry forward, just in terms of how things operate behind the scenes.”

Espinoza added, “There were some elements of this deal which were never addressed, were never contemplated in Lewis-Tyson. For example with Lewis-Tyson there really wasn’t the concept of behind-the-scenes shows. That’s an element that has obviously come up in the meantime. Not only are there differences in the companies and the business objectives between now and then there are some elements of the business that are changed as well.”

If that fight was the precedent, the television executives’ ambitions now extend further. Hershman said, “We got the deal done, which is the important thing. Our focus from here forward is how do we make this into the biggest event of all time and how do we collaborate to do that.”

Espinoza concluded, “We’ll have everything in order to do a tremendous promotion and pull off the biggest boxing event that the sport has ever seen.”

There are 52 days left to go. The countdown continues.

YOU CAN KEEP UP TO DATE WITH OUR MAYWEATHER VS PACQUIAO NEWSLETTER TOO. SIGN UP HERE