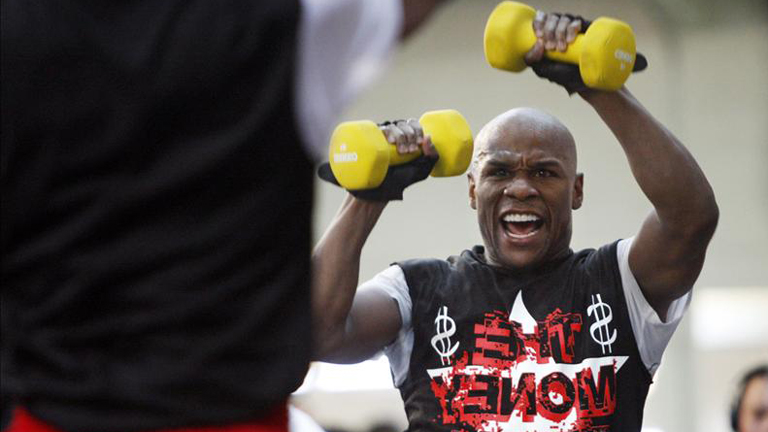 'Everyone should come to cherish Floyd Mayweather in his 50th fight'

EVERY time there has been a big fight in Las Vegas since the retirement of Floyd Mayweather, talk about the American superstar returning is never far away. There was no exception when, as Andre Ward pipped Sergey Kovalev to bag light-heavyweight supremacy, the spectre of Mayweather loomed. Certainly, the reality of him coming back seems to be edging closer and closer.

Inside the MGM Grand, “Money’s” father and trainer Floyd Mayweather Snr – mobbed by the media – talked up the prospect of his son returning, with a rematch with Manny Pacquiao not written off. Mayweather Jnr fuelled rumours himself by appearing at the Filipino’s recent victory over Jessie Vargas.

“Easy money,” said Mayweather Snr. “It would be even easier than it was the first time.”

Not everyone would welcome a sequel to the May 2015 superfight, won unanimously by Mayweather in a contest largely criticised for the lack of drama.

“I understand why it would happen with the money involved,” said veteran journalist, Larry Merchant, “but that doesn’t mean I like it. As the old saying goes, ‘Fool me once, shame on you, fool me twice, shame on me’.”

One man who would embrace a comeback is a man who knows Mayweather very well. Richard Schaefer, who worked closely with Floyd during the final years of his career, now has his own promotional company – Ringstar Sports – following his 2014 split from Golden Boy. Schaefer, who also has a strong relationship with Mayweather’s advisor Al Haymon, first worked with the unbeaten fighter in 2007 when he defeated Oscar De La Hoya.

“Floyd is my friend, and the first time we did the Mayweather-De La Hoya fight, Floyd and I had our run in but from then on we established a tremendous relationship,” Schaefer told Boxing News. “I respect Floyd for who he is, and what he has accomplished. When I left Golden Boy, within an hour Floyd made a statement that he didn’t want to be with them anymore either. He’s a friend and he always will be. I know his family, I know his kids, my kids know them, they spend time together. But I don’t really cross that friendship in relation to hammering him ‘Are you going come back? Are you going to come back?’ He retired on his own terms, and most recently he opened the door a little bit by some of the statements he made, but it’s going to be totally up to him. I really don’t know. There are days when I feel he is going to come back, and there are days when I feel he’s not going to. The more time that passes, the more difficult I think it will be for him and his body to come back and perform at that level.”

Schaefer believes the sport misses Mayweather, whose record remains at 49-0, yet did not appreciate him while he was active. The promoter believes Mayweather – who has been out of the ring since beating Andre Berto in September 2015 – coming back and securing his 50th win should act as a tribute to the fighter, and a thank you from the industry.

“I can’t give one interview where I’m not asked if Floyd Mayweather is coming back, ” Schaefer explained. “When we had him, I don’t think many media people and fans appreciated what we had. Forget fighters, he was one of the greatest athletes of our time performing at such a high level. He made Juan Manuel Marquez look ordinary, he probably didn’t win a second of the fight. That’s how good Floyd Mayweather was. And those of us who were fortunate to see him, live or on TV, these are memories I think we will appreciate as time passes and I will always cherish my time with Floyd.

“If he comes back, one more time, for [fight] number 50, trying to break Rocky Marciano’s record, it would be a spectacular event, and I hope that the media and the fans are going to be embracing him if he decides to do that. Again, I don’t want to push him. We’ll see. When you look at Mayweather fighting Miguel Cotto, it was criticised because Cotto was too old. But he went on to beat Sergio Martinez and fight Canelo. Shane Mosley was considered an old Shane Mosley but then he went on to fight Manny Pacquiao and that’s okay. Oscar De La Hoya the same, Mayweather first – when he’s too old – but then he fights Pacquiao. The same with Ricky Hatton, Floyd fought Hatton who then And what about Juan Manuel Marquez? He’s too old, he’s too small, he’s past his prime, and then he fights Pacquiao and gets the better of him each time. There was always that chalice around Floyd, and I think when you look at the strength and who he fought, who he dominated, you cannot compare Floyd Mayweather to anybody else of our generation. When you look at how he beat them, and then where they went – how many additional fights they had Floyd Mayweather is totally underappreciated today.

“But unfortunately boxing greats are only really, really appreciated many years after they’re gone. I think if Floyd a 50th fight, it should be an appreciation. Everyone come together to cherish Floyd Mayweather one more time, basically a thank you from all of us to Floyd, because he opened the door to many others, he brought boxing to mainstream who were not involved in boxing before. For that, we owe him a thank you, and we should stop with all that criticism.”