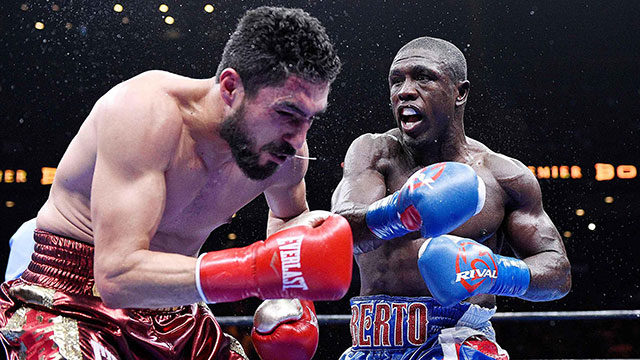 ALTHOUGH most have met the news that Floyd Mayweather will fight Andre Berto on September 12 with disdain, the 31-year-old Florida native has been in some great fights.

Granted, his three career defeats have come in his last six fights, but Berto was once a highly-touted prospect and, let’s not forget, has won world titles at welterweight.

A bullish fighter who, at times, has unsuccessfully mimicked Mayweather’s famed shoulder roll, he’s seen his fair share of action. We’ve listed some of his most exciting contests.

1. L UD 12 Victor Ortiz
In what was undoubtedly the best fight of 2011, then-WBC world champion Berto was dethroned by Victor Ortiz over 12 tumultuous rounds at the Foxwoods Resort in Connecticut. Down in the first round, Berto responded in the second by dropping Ortiz to even things up. They traded knockdowns in an enthralling sixth round before continuing to fire bombs at each other for the remainder of the contest.

2. L RSF 12 Jesus Soto Karass
Fighting for the first time in eight months and under new trainer Virgil Hunter, Berto was supposed to beat Soto Karass to revive his career after losses to Ortiz and Robert Guerrero. The Mexican tore up the script, stopping Berto in the 12th and final round. It was all-action from the start, with both men throwing wildly but Soto Karass was landing more. In the 11th, Berto put him down and looked to have secured victory. However, Soto Karass rose and went on to drop Berto in the final stanza and referee Jon Schorle waved it off as Berto looked wobbly as he stood up.

3. L UD 12 Robert Guerrero
Fought at close range, Guerrero never gave Berto any room for the full 12 rounds. Down in rounds one and two, Berto managed to survive a torrid start to the fight but was outworked by Guerrero. Both men’s faces were messes after the fight, with both Berto’s eyes almost fully closed and the same going for Robert’s right eye. The win earned Guerrero a lucrative showdown with Floyd Mayweather.

4. W RSF 6 Josesito Lopez
In Berto’s most recent outing he managed to prevent another upset by dropping Lopez twice in the sixth to force referee Raul Caiz Jr to stop the fight. The momentum shifted back and forth for the first five rounds, though Lopez was just ahead on two cards at the time of the stoppage. Cut and bruised, the brave Josesito was dropped by a series of right hands in the sixth. He rose, only to be put down again by another right, with Caiz Jr swiftly ending proceedings.

5. W UD 10 Cosme Rivera
While still a prospect, Berto suffered his first knockdown against veteran Rivera. In the sixth, the Mexican landed a stiff left uppercut to pick up a flash knockdown. Berto rose quickly and began to regain his dominance in the bout. He opened a cut on Rivera and in the final two stanza’s the two traded some serious leather.