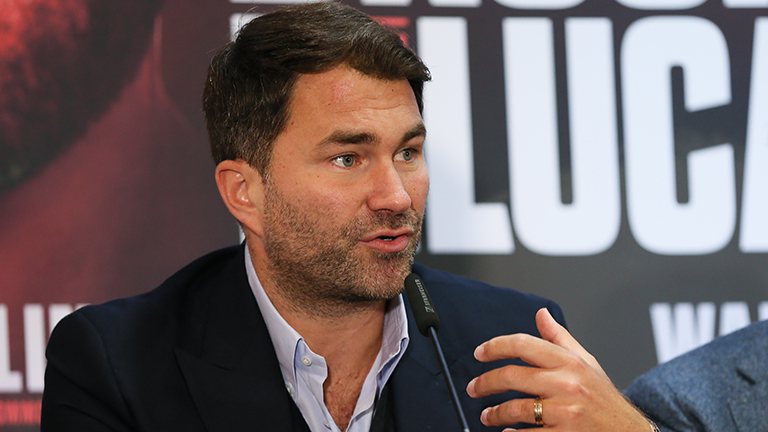 EDDIE HEARN is promising the kind hype and excitement that his promotional rivals can’t when he opens his Fight Camp on Friday August 1. Super-welterweights Sam Eggington and Ted Cheeseman collide in a domestic crossroads battle in the first event on the grounds of Matchroom’s HQ in Brentwood, Essex. The culmination of the audacious outdoor project will see Dillian Whyte and Alexander Povetkin clash in a heavyweight pay-per-view show on August 22. There will be a further two cards – topped by Terri Harper vs Natasha Jonas (August 7) and Felix Cash vs Jason Welborn (August 14) – in-between.

As things stand, the only media in attendance will be those from TV broadcasters Sky Sports and DAZN and the radio commentary teams.

The first event will come three weeks after Frank Warren’s first post-lockdown show on July 10 at the BT Sport studios and two months after Bob Arum’s Top Rank brought boxing back to Las Vegas in his air-tight ‘Bubble’ inside the MGM Grand.

“Big props to Top Rank for bringing boxing back,” Hearn said during an online conference call with the British media on Friday (June 26). “But no one is watching it because no one knows about it and the fights aren’t good enough. I don’t want to come back in a dark studio in the middle of nowhere, it’s not a game show.

“I want to come back with a visual and project that people can get excited about. It’s about hype but most of all it’s about the fights. We will have five fights every night and they will be 50-50 fights or thereabout… The first rule of Fight Camp is no easy fights.”

There was some resistance to his plans. He claims Chris Jenkins’ contract with Queensberry Promotions stopped him from fighting Conor Benn on the first card. Hearn added that the concept of performing without a crowd was not appealing to all but those wanting to fight and earn have little choice.

“Initially, every fighters’ reaction was, ‘I’d rather fight in front of crowds’. When this [lockdown] first happened we presumed we would bring boxing back in July or August with crowds. So fighters wanted to wait. But now they’ve realised the uncertainty of the situation we’re in – there is a chance we won’t see crowds this year – but now is your opportunity. You come out and fight. I believe the [TV] audiences for these fights will be huge. It’s a chance to come and make a name for yourself.”

Some fighters were concerned that they could not guarantee they would be fighting fit after the constraints of lockdown.

“There’s no excuse in terms of preparation,” Hearn said. “The private gyms have been open [for a while] now. The British Boxing Board of Control have enabled us and boxing to return in the gyms. It’s one of the reasons we went a little bit later because I felt like going earlier might not give fighters the best chance of getting decent preparation and sparring.”

Expect fireworks and razzmatazz and excitement, says Hearn. He also expects to lose a lot of money during the 22-day fight festival that will take place behind closed doors.

“There is no gate,” Hearn explained. “A show with no gate, you want to keep those to a minimum. It’s not like we’ve been asking fighters to accept less money. A lot of fighters are taking harder fights than they thought they might have to take and that’s a good thing.

“I was talking to Bob Arum and he was ranting about how bloody expensive it is. But you can’t cut corners. We’ve got no choice. You either sit and wait and say we’ll come back in October or November or you give it a crack.

“Everyone will give it a crack in their different way but this is our way of giving it a crack and I think it’s going to be the one that makes the most noise.”

Hearn – who this week announces his first US show will be on August 15 – does not plan to extend Fight Camp beyond the Whyte-Povetkin show but has not ruled out “quirky venues” should crowds not be allowed to return after that.

The heavyweight clash between Anthony Joshua and Kubrat Pulev is being targeted for November, with Cardiff’s Principality Stadium still the desired location but the O2 in London and the Manchester Arena are also under consideration.