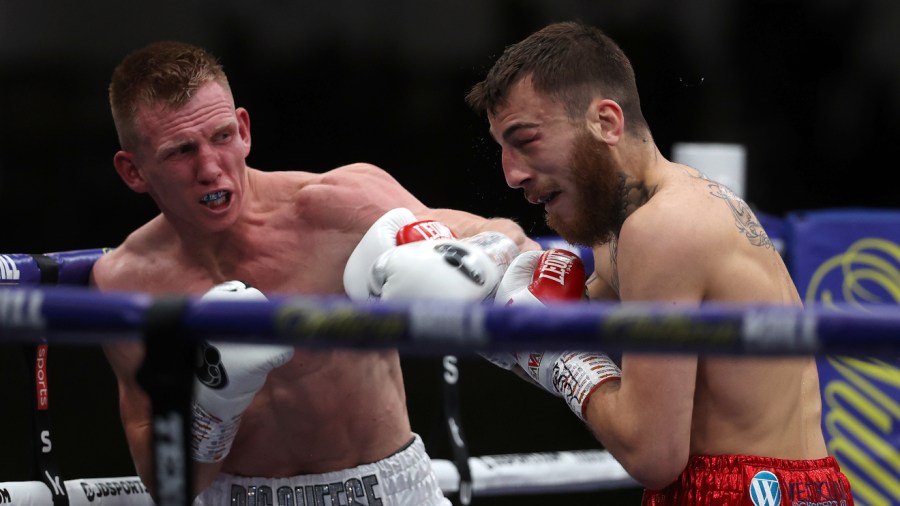 Boxing rallied from the brink in 2020 but we can’t celebrate just yet, writes Matt Christie

BACK in March, as the mysterious Coronavirus sank its teeth into the world, we at Boxing News were ordered from our desks and out of our old London office. None of us have been back since.

The following week we put an issue to press from our respective homes. The coverline – SHUT DOWN – was stark. Days before, the Olympic qualifiers in London were pulled midway through. Huge events in the professional code were indefinitely postponed. Plans to stage fights behind closed doors were cancelled. Gyms were forced to close. The sport dropped to its knees, the darkness took hold and the count slowly tolled over us.

The days and weeks that followed should never be forgotten nor the severity of them underestimated. Calls we made to promoters and fighters and trainers and gyms and the British Boxing Board of Control were bleak. The answers we so dearly wanted were not there. Simply, nobody knew how to get up.

Every week, Boxing News kept putting an issue to press even though 90 per cent of the shelves it usually sat upon were locked away. The pages were predominantly filled with stories from better times. But we had to keep being honest, we had to keep reminding everyone in the sport what we were up against; several times a week Robert Smith – very much an unsung hero of 2020 – would answer the phone and detail the lengths he and his team were going to just to haul the sport upright before the count reached ten.

Thankfully, as boxing drew on its astonishing resilience and never-say-die spirit, it grabbed hold of a rope and pulled with all its might. Grumble about the powerbrokers by all means but please, as the year of 2020 draws to a close, remember what they managed to do in impossible circumstances. In June, Bob Arum and Top Rank in America created the first boxing ‘bubble’; such a delicate word by definition yet it proved to be the sport’s saviour.

The following month, Frank Warren, after an incredible team effort, was the first UK promoter to stage an event on these shores at the BT Sport Studios in Stratford. Stu Greener created a bit of history as the first boxer to enter a UK ring amid the pandemic before Brad Foster and James Beech Jnr battled valiantly in the main event.

In August, Eddie Hearn redesigned the grounds of Matchroom HQ to create a month-long fight festival. I can still remember the tingles I felt as Ted Cheeseman and Sam Eggington went to war and reminded everyone what we’d been missing. A week later Natasha Jonas and Terri Harper delivered one of the fights of the year. Fight Camp culminated when Dillian Whyte gambled yet again only for Alexander Povetkin to hit the jackpot.

Fast forward to November and December. Fighters like Daniel Dubois and Anthony Yarde met their matches in Joe Joyce and Lyndon Arthur. A crowd of 1,000 watched Anthony Joshua kayo Kubrat Pulev. The night before, Dennis Hobson staged an audacious drive-in show where punters watched live boxing from their cars.

The sport is back on its feet and throwing punches. But the fight continues. Many gyms still lie dormant, many promoters are still unable to stage a show. More fighters remain on the sidelines. Countless ex-boxers are alone. As we approach 2021 we must not forget them. More than ever, the sport must show it can unite. It’s the duty of those at the top to lend a hand to those still scrambling on all fours below them. There is still a long way to go before we can raise our collective arms in victory.

I would like to extend my heartfelt thanks to those who spared a thought for Boxing News in its 111th year. To my team and the contributors who went above and beyond, to the fighters, trainers and promoters who always answered the phone when I called, but most of all to you, our wonderful readers. You kept a good thing going and I can’t thank you enough.

So here we are, nine months after the sport was shut down. On our cover this week is Canelo Alvarez, the sport’s biggest star fresh off a virtuoso performance. But the biggest story of 2020 in the boxing world is not Canelo, or even the pandemic and its effect, but one of survival. It’s a story that should be championed forever more.