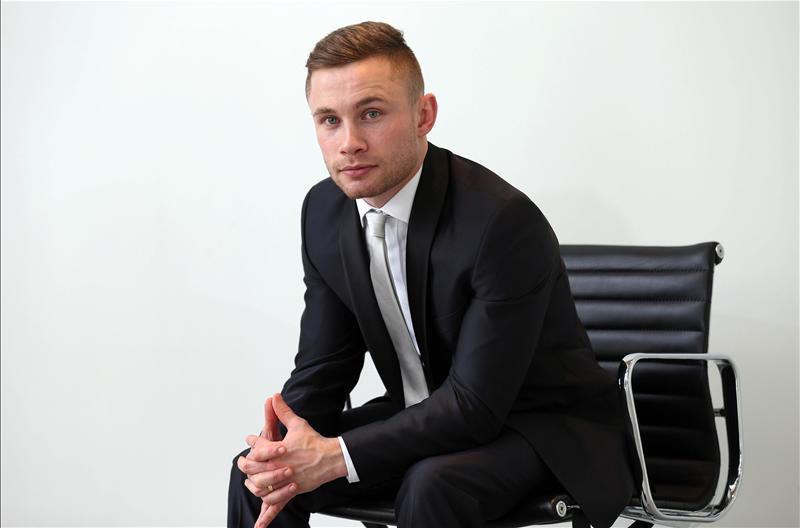 THE mission might be to conquer the world, but it’s a family affair. At a quiet gym in London  Carl Frampton has been diligently preparing his first IBF super-bantamweight title defence. The champion has a fanatical support waiting for him in Belfast for the fight on Saturday (February 28) but he secluded himself in Battersea, away from his wife and young children, to train with his fighting family. Barry McGuigan is his manager and mentor. Shane McGuigan, one of Barry’s sons, trainers him and the other McGuigan brothers, Blane and Jake, promote him through CWM Cyclone Promotions. It’s a unique team with singular purpose, to bring Frampton, and in the process boxing, to the mainstream.

The similarities in the careers of Frampton and his mentor are already striking. Now a world champion, like Barry before him, Carl’s next fight, against Chris Avalos, will be on terrestrial television channel, ITV. In his own fighting days Barry McGuigan became a household name and achieved record-breaking viewing figures on a terrestrial channel too.

It’s a coup for boxing to return to ITV. “The very fact they’ve got involved in this one, they’ve shown an interest and I do believe that the sort of atmosphere that Frampton generates, particularly in the cauldron that is, as we call it ‘The Jackal’s Den’, the Odyssey Arena in Belfast, it’s a modern arena, the noise it generates is terrifying, it’s incredible and it will be even more now because this is the first defence of his world title and this is a very tough fight for him. So I think if you look at all of the combinations it really has a chance to work for terrestrial TV. I come from a generation where my career started on BBC and finished on ITV and so I just came out before the satellite era came in. Having said that, [satellite TV] is always going to be able to afford fights and they pay more than terrestrial TV, it’s no secret they’re going to make it attractive for boxing to go there. But I also believe it can be successful on terrestrial TV,” Barry said.

“We’re fascinated by how people survive in stressful situations and there can’t be any more stressful situations than a big fight and that combination of that and the fight and that build-up. If terrestrial television give us the time and the patience and are willing to dig in their pocket, because that has to work too, I genuinely believe that there is a place on terrestrial TV for boxing.

The sport is on a roll in the UK. The Gennady Golovkin-Martin Murray world title fight was screened on Channel 5 last week. Having this fight on ITV is an opportunity for that wide, mainstream audience to see boxing. It could be a breakthrough moment for Frampton, and the hope is that this occasion will persuade ITV to continue to screen boxing. The stakes therefore are high.

“There’s definitely an exceptional amount of pressure on our shoulders,” conceded trainer Shane McGuigan, but he insisted that Frampton “relishes it. It drives him, that sort of pressure, it really does. Some guys just crumple but he’s the kind of guy that loves it. The bigger the occasion the better he performs.

“He really shows up on the night. It’s nice to deal with someone like that, because he’s so calm and relaxed. It makes my job a lot easier.”

Frampton has taken a clear minded approach to his whole career. It was a decisive move to make Shane, who’s still only 26 years old, his main trainer, when he might have gone for a more experienced hand in his corner – a choice that was vindicated when Carl won his world title in September.

Shane has own views about training and does not let the traditions of the sport sway him. In this camp for instance they didn’t do any steady state running, normally a staple component of a boxer’s routine. Sprints and their range of circuits served for Carl’s conditioning training. “People are quick to judge because I’m very young but the proof’s in the pudding. Carl performed very well and he’s getting better,” Shane said. “As long as I’ve got his trust, that’s all that really matters to me.”

Barry McGuigan and Frampton’s promotional team have also taken their own approach to the IBF champion’s career. Carl parted ways with Matchroom and broadcaster Sky. His next deal was with BoxNation, a subscription channel, and culminated at the Titanic Quarter in Belfast where Frampton won the world title in front of 16,000 adoring fans in a custom-built open air stadium. (The latest edition to the family set up is a dog called Titan who lounges lazily in his basket inside the doorway of McGuigan’s gym, his name a fond reminder of that special night.)

Like Shane in his field, Barry has overseen Cyclone Promotions plot their own course for Carl’s career. “People like to say you’re not this and you’re not that, you can’t do this and you can’t do that. I love that. I love people saying that. Because that just really motivates me. It fires me up,” McGuigan senior said. “This is where we are now and it’s where I’ve always wanted to be. The greatest satisfaction in life to me is to see a young kid fulfil his potential and being part of that journey with him. That’s the greatest thing in life for me. I just love all that.”

“We took a gamble,” he continued, “but we knew what we were gambling with. Frampton is an amazing fighter. To everyone out there that’s doubted us in the past, we’ve proved that he’s world class. I think the next three years will prove that he’s one of the best fighters in the world. You look at [Gennady] Golovkin and you look at [Floyd] Mayweather, you look at Andre Ward and you look at fighters coming through and there are some amazing fighters out there but I’m telling you this kid is in the bunch. He’s right up there with them and we’ll prove that.

“He already is a star but I think he’s going to be a crossover star. Terrestrial television gives us a really good chance of achieving that.”

McGuigan has a vibrant confidence in his vision for Cyclone Promotions. Frampton’s continuing success is one step. “Then it’s about developing other kids,” Barry declared. “We want to be one of the best in the business. I like to think we’re good at what we do and offer a unique service. But we’re different to everybody else.”

“We’re growing and developing,” McGuigan added. “The object is to be the best at what we do. There’s much competition, a lot of good people know what they’re doing. It’s a formidable opposition we’re up against, but we like to think we’re in with a chance.”