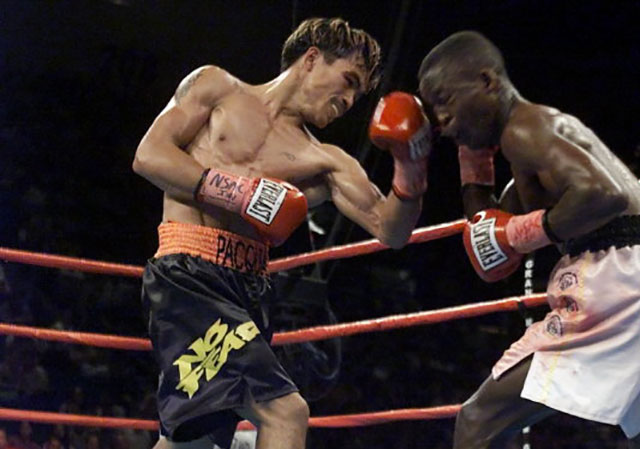 The Thai has the sort of career that would have been considered normal between the two world wars, but nowadays seems completely out of lace.

On April 7 the 38-year-old from Nakhon Ratchasima defends his WBO Asia Pacific light-middleweight belt in Bangkok against Dan Nazareno Jr, a Filipino he has already beaten for the same bauble, in October last year. What’s so remarkable about that? Well, Sirimongkol contested his first title, back in August 1995, down at super-flyweight!

So in nearly two decades he has filled out from 115lbs to 154lbs, which just about matches Manny Pacquiao, who in around the same time span has gone from 106lbs to 147lbs (Manny won a light-middle belt against Antonio Margarito, when really only weighing welter).

And Sirimongkol was a pretty good fighter in his prime. In his early days he held the lightly-regarded WBU belt at super-fly (115lbs) and bantam (118lbs), but he graduated to much more respected WBC crowns at bantam then super-feather (130). He lost the WBC 130lbs belt to Jesus Chavez in Austin, Texas in 2003 and two years later was back in the USA (Las Vegas) to stop Michael Clark in an eliminator for that body’s lightweight belt. But a shot at the world crown never materialised and he has since then contented himself with regional titles, gradually moving up to light-middle.

The quality of his opposition has been inconsistent – some of his rivals have been listed as debutants, which seems shocking but is the sort of thing that goes on in Asia. But he can no doubt keep on going for several more years if he is rarely tested.

Anyway, the point is that this sort of career weight-gain was at one time common in the days when fighters out of necessity turned pro early, rather than spent years in the amateur ranks. France’s greatest boxer, Georges Carpentier, started at around 112lbs and grew all the way into a world champion at light- heavyweight, one who then challenged Jack Dempsey for the world heavyweight crown. Mind you, Georges did make his professional at the tender age of 14!

Ted “Kid” Lewis, whom Carpentier beat in a European heavyweight title contest, also started off boxing pro as a flyweight, winning his first titles at featherweight. Ted was a bit of a late developer compared to Carpentier – he didn’t make his pro bow until he was 15.

Young Stribling was another who grew during his career. The Man from Macon turned pro at 16 in January 1921 and four months later won the Georgia featherweight title. Stribling made it all the way up to heavyweight, losing a 1931 title fight to Max Schmeling before his untimely death in 1933. Now that’s old school.