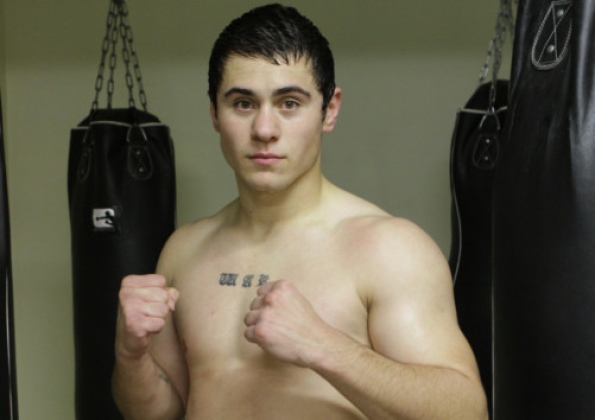 IN the aftermath of career-best performances, young professional boxers usually find themselves progressing towards title bouts. An impressive display against a seasoned campaigner is often their ticket to a televised opportunity. Sadly, that wasn’t the case for David Allen.

In June, the 22-year-old Doncaster heavyweight, 6-0-1 (4), outclassed and overwhelmed the infamous (among British boxing fans) Larry Olubamiwo in Newcastle, and forced the reformed drugs cheat to quit in less than three rounds.

It was a punch-perfect exhibition of Allen’s pugilistic potential, and thanks to a full training camp under the knowledgable and attentive eye of Peter Fury, the man known as ‘The White Rhino’ was ready for the next test of his apprenticeship in the paid ranks.

“I got into great shape when I was training with Peter and I was ready for anybody they wanted me to fight. Names like [Matt] Skelton and [Dorian] Darch were mentioned. And even a rematch with Plamen Nikolov [who Allen drew with]. I just wanted to keep busy and build some momentum to be honest,” said the likeable prospect.

Frustratingly, through no fault of his own, Allen found himself knocking on the door of an empty house. He had thrashed himself into the shape of his life and polished his raw, natural skills in character building sparring sessions with world class contenders; Tyson Fury and ‘Fast’ Eddie Chambers, only to find himself with nothing on the horizon.

It doesn’t seem a long time in the grand scheme of things, but three months passed and the heavy-handed prizefighter allowed his disappointment to consume him. He gained weight, searched for full-time employment, and only occasionally found time to train. Thankfully, those attempts to reignite the roaring blaze are at last making smoke signals.

“It’s been a really bad time for me and I’ve put a lot of weight on. But I’ve been doing some training and sparring lately. Last night [September 23] was actually the best I’ve ever sparred.”

Next week, Allen will fly to Poland for an out of the blue opportunity to spar with Artur Szpilka, 16-1 (12), who will square off with Tomasz Adamek in November for the IBF International heavyweight strap.

“It’s a new experience for me and I’m really looking forward to it.”

And better still, the charismatic Yorkshireman also has an unexpected fight date to “look forward to” and build towards. His November 7 opponent is unnamed at the moment, but at this stage of Allen’s fledgling career, in the wake of such a disheartening period, the opponent isn’t required to be a smooth operator.

“I’ll be fighting on November 7 at the Doncaster Racecourse. I think it is a Glyn Rhodes (MBE) show,” Allen said with a glint in his eye. “I’ve got a lot of work to do, but I’m going to work hard in Poland and keep it going when I get back. I’m back with Mick (Marsden) now, in Leeds, and I want to be no heavier than 17-and-a-half stone for the fight.”

Allen is willing to travel anywhere to fight and he is keen to travel for sparring with anybody who is anybody. He simply wants to learn and become the best fighter he can be. He doesn’t call people out and he doesn’t profess to be the second coming of Mike Tyson. He just wants to fight.