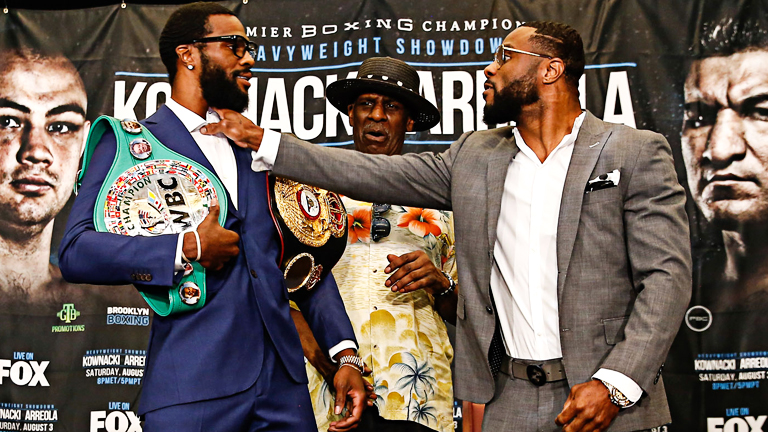 IT’S commonplace for boxers at the end of their careers to get chances their current form has done little to merit. A perfect case in point is Jean Pascal, 36 years old, one noteworthy win in five years (way back in 2014 against Lucian Bute) with four noteworthy losses since, but never further than one victory away from a title shot.

Those who argue it’s a symptom of the modern era and the plentiful belts on offer would have a sound argument but – in truth – the ageing former world champion, with the promise of one more chance ringing in their ears, have always been fed to up-and-comers in their wilderness years.

And it’s hard to blame them for taking the chance, despite the stacked odds against them and the risk to their health, given the long retirement ahead. No one should be too hard on Pascal – once a supreme fighting machine – for taking this shot at southpaw, Marcus Browne.

However, it’s a challenge for the marketeers and the promoters to spin fights like this as genuine 50/50 matchups. But they do a sound enough job. They tell us how dangerous the old fighter remains, how the young fighter has never fought anyone like them, and they remind us of upsets from the past. They do all this without admitting victory for the old timer is not remotely part of the plan because, in the same way that fighters have to fight, promoters have to promote. It’s all part of the game and fights like this – out with the old and in the with the new – are part of the game, too.

And it’s true, Pascal did beat Chad Dawson, another southpaw, to become light-heavyweight No.1 in 2010 and he did hand Carl Froch the mother of all tests in a 2008 WBC super-middleweight title humdinger. And it’s also true that when he was on the way up, and showcased on ESPN’s Friday Night Fights, some observers declared him the next Roy Jones Jnr.

But the truest truth, at least in 2019, is that he’s well past his best and a long, long way from that promising young fighter he used to be. Even if he manages to muster up one last admirable effort, as old fighters sometimes do, he will still find the going tough and the punches damaging inside Brooklyn’s Barclays Center on this Premier Boxing Champions-promoted bill.

The only win against a world class opponent he’s had since beating Dawson (though he did hold Bernard Hopkins to a draw before losing the rematch) was the aforementioned victory over Bute four years later. He performed decently against Sergey Kovalev in 2015 (l rsf 8) but did nothing to merit the return the following year when he was stopped in seven. He was reasonably competitive against Eleider Alvarez in 2017 but was a worthy loser after 12 rounds and, over the same distance, was widely outboxed by Dmitry Bivol at the end of last year. With each outing, Pascal has shown his decline is gathering pace. His speed, once so impressive, is faltering. His accuracy, always erratic, is worse than ever.

In contrast, Browne is at the other end of the scale. He deserves a world title chance, he’s at his peak, and he really is dangerous and hungry and fast and accurate. And though it’s easy to get carried away with certain fighters before they’ve been truly tested, Browne – though I’m not for one moment suggesting he’s a legend in the making – does appear to be on an upwards trajectory.

A clever and improving fighter who resides in nearby New Jersey, Browne surprised many when he outscored the revered Badou Jack in January this year. The 28-year-old won the Interim WBA 175lbs title with that win but, let’s be clear, it cannot be regarded as anything like a true world belt. For context, Bivol is also listed as WBA champion and he’s active. Browne also collected the WBC Silver title when he beat Jack. For further context, Oleksandr Gvodzyk is the WBC champion and, like Bivol, is active. Enough said on all that.

The important thing about the Jack fight is that he defeated one of the best in the division. He proved he could go 12 rounds in the process. A clash of heads in the sixth left Jack nursing a grotesque cut on his forehead which could not have helped his cause. Certainly, the wound and blood that spilled from it created enough of a question mark to merit a return but ample credit to Browne for getting the all-important win.

So, for now, we have Browne-Pascal. Expect the younger man, driven by providing a future for his beloved young daughter, to take control early behind his long jab, tie up any wild lunges from the veteran, and boss the action inside and out. Whatever Pascal lacks these days, he remains durable and brave so he could well hang on the full 12 rounds, but – after losing a lopsided decision – he might suddenly be all out of chances.

Another boxer who seems to be in the right place at the wrong time an awful lot is heavyweight Chris Arreola. However, he’s scored enough victories since losing his biggest fight – to Vitali Klitschko in 2009 – to suggest he has some chance against the unbeaten Adam Kownacki in a 12-round heavyweight battle.

In this scrap between Andy Ruiz Jnr wannabes, don’t expect to be wowed by the physiques on display but it has all the ingredients to be a crowd pleaser for as long as it lasts. Arreola, in fairness to the 38-year-old, has been getting himself in decent shape – by his standards – in recent outings and he comes into this on the back of a reasonably impressive stoppage of Jean Pierre Augustin in March. It was the veteran’s second stoppage victory since taking a hefty thrashing from WBC champion Deontay Wilder in 2016.

But Arreola, despite notching early wins over the likes of Eric Molina and Seth Mitchell post-Klitschko, long ago found his level. Twice beaten by Bermane Stiverne and held to a 2015 draw by Fred Kassi, Arreola, 38-5-1 (33), will start as big underdog against Kownacki, 19-0 (15).

The 30-year-old has steadily increased his level of opposition, beating Artur Szpilka in 2017 (w rsf 4) and following that with a gruelling 10-round points win over a motivated Charles Martin a year later. Fringe contender Gerald Washington was stopped in two rounds in January.

The Brooklyn-based Pole can grind down Arreola after a few sticky patches, maybe around the ninth, to stay on track for a world title shot in 2020.

Also on the bill, and staring into the abyss, is 35-year-old Andre Berto (vs Miguel Cruz at welterweight) and middleweight Curtis Stevens, 34, who takes on Wale Omotoso.

The Verdict Browne’s rise should continue but all eyes will be on Kownacki on the undercard.