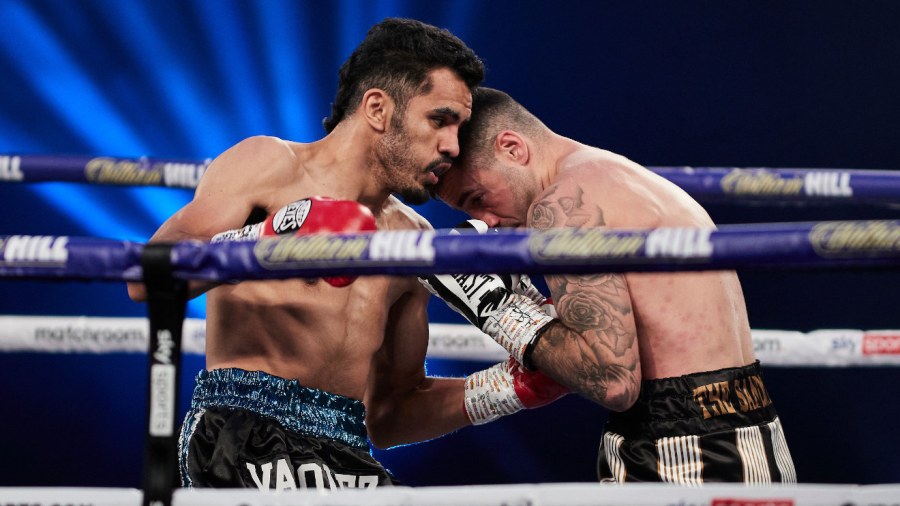 BOXING. There is nothing quite like it, is there? No other sport has the capacity to excite, infuriate or court controversy in equal measures (maybe until VAR’s introduction into football). And there you have Matchroom’s latest offering in Peterborough on Saturday (October 17) in a nutshell where Lewis Ritson’s 12-round split decision points win for the WBA intercontinental super-lightweight belt over Mexico’s champion Miguel Vazquez provoked such outrage on social media.

The debate over the scoring, sadly, detracted somewhat from a terrific night’s entertainment featuring blood, guts, glory and upsets.

But the word ‘upset’ does not come close to encapsulating some of the views flying around about the judging in the main event or Terry O’Connor allegedly looking at his mobile or something other than the action. Both are a matter for Mr O’Connor and the British Boxing Board of Control to address.

The Birmingham judge marked it 117-111 to Ritson which looked far too wide. Marcus McDonnell saw it 116-113 to Vazquez with Michael Alexander having a similar scoreline to the Twickenham official, but in favour of “The Sandman”, 115-113.

A decision open to debate? Certainly. A robbery? That’s an extreme view. The judges were wearing surgical masks, not Dick Turpin ones. Your BN writer had it 115-113 to Vazquez, or seven rounds to five for the former IBF lightweight boss, but that’s just my opinion.

That highly-regarded experts, Matt Macklin and Alex Arthur, differed so markedly in their scorelines on their respective broadcast platforms, Macklin for Vazquez (Sky Sports) and Arthur for Ritson (DAZN) perhaps showed it was not the easiest to judge.

While we all have our own views, ultimately, the only ones that count are those of the judges and the result in black and white is Ritson by split decision.

One thing not up for debate is that this wasn’t an archetypal Ritson performance though it has to be said he has never encountered a Vazquez before.

The “Puppet” clearly had something up his sleeve and the fleet-footed Mexican boxed and moved with class and skill, even if the weight of his shots were never going to make a dent in the Geordie.

Many of the rounds followed a near identical pattern: Ritson landing his trademark jab and a few good lefts with his 33-year-old opponent tap-tap-tapping away. A lot of Vazquez’s shots hit the gloves and tattooed arms of Ritson, but it’s indisputable that enough scoring shots connected for the visitor to lead the way.

In round nine, when Ritson banged in two lefts up top, you wondered if it was the cue for the crowd-pleaser to cut loose, but it never came. There were to be none of the thundering head and body shots which typified his stand-out win over Robbie Davies 12 months ago.

Whether you thought the Neil Fannan-trained fighter won, lost or got hammered, this should ultimately prove a good night’s education against a wily ex-champ whose reputation has only been enhanced.

“I thought I won,” Vazquez told BN. He was disappointed but far from furious. “But I’m not going to say anything bad about the judges. I said, ‘Lewis, make me proud and be world champion.’” That was perhaps the classiest observation of them all.

The undercard proved an incredible spectacle.

After starting his career with a defeat, Marc Leach is now unbeaten in 16 and win number 15 has earned him a deserved shot at the British super-bantamweight championship after ending Qais Ashfaq’s unbeaten run in their all-southpaw affair.

The Salford underdog was simply superb, moving and landing so effectively in his unanimous points success.

It wasn’t the tidiest of contests and that maybe prevented the Leeds boxer from finding any rhythm but credit must go to Leach and his corner.

The key moments came in two knockdowns, a left and follow-up left-right put Ashfaq on the canvas for the first time in his career in the fourth and he was floored again by the same formula in the seventh.

Thomas Patrick Ward required 24 stitches to an horrific cut left eye which ended his gripping super-bantamweight encounter with Thomas Essomba at the start of the ninth of 10 rounds.

Given it was an accidental head clash in the seventh, it went to the judges’ cards, with McDonnell scoring it 88-85 to Essomba, O’Connor 88-84 to Ward with Alexander having them level at 86-86 for a technical draw.

It was a belter with Ward, usually elusive and hard to hit, often choosing to fight. The WBO number three, from Durham, scored with some sharp shots but late sub Essomba, not for the first time, showed he is no respecter of rank or boxing privilege, with several furious assaults. BN had it 87-85 to Ward but any of the three results were feasible.

There was an upset at super-lightweight where popular unbeaten Geordie Joe Laws was knocked out in round three by Rylan Charlton.

Norwich’s ‘Pintsize Powerhouse’ hurt Laws early on with a left to the body and just when the ‘Benwell Bomber’ started to warm into the bout with a series of lefts, Charlton felled him with a left hook to the head.

Charlton decked Laws with a right to the head in the third and though the 26-year-old was up by “eight” he was highly-unsteady and ruthless Rylan took advantage with a left to the body and a right upper cut putting him down again with Mr. McDonnell counting him out at 1-39.

There was a notable win in the other six-threes for Birmingham’s Kane Baker, outpointing undefeated Scouser Meshech Speare, 59-56 from Mr. Alexander in a welcome 11th-hour addition to the event.

While Speare missed with a fair bit, he carried some power and threat, hurting Baker at the end of the fourth with four lefts.

But the Brummie set a cracking pace, the taller man actually relishing being on the inside where he did his best work and ended a worthy winner.

On the subject of welcome additions, Ellie Scotney looks a wonderful talent, the Catford super-bantamweight launching her pro career with a 60-53 triumph over a very game Bec Connolly.

Adam Booth-trained Scotney controlled matters in style, scoring with both gloves and while the Swindon fighter touched down briefly in the third, it was a contest which deserved to go the distance and did. Mr. Alexander was in charge.

The all-British fight for the vacant WBO middleweight title between Savannah Marshall and Hannah Rankin was scheduled to take place on the Peterborough show. That was until Savannah’s coach, Peter Fury, tested positive for Covid19. Matchroom say they hope to stage it again before the end of 2020.

The Verdict Controversies aside, this was a brilliant British show.