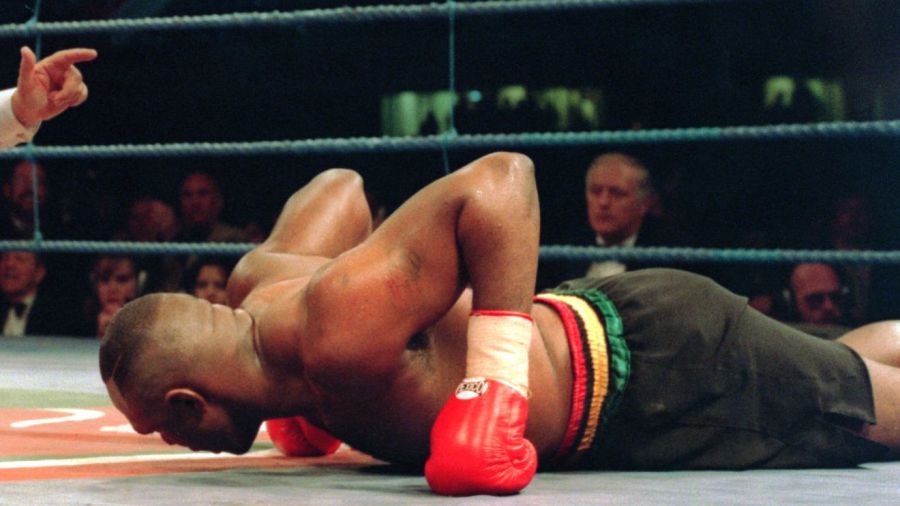 FRANK Maloney didn’t bother watching the boxing at the 1988 Olympics. Why would he? He was not a major promoter and, anyway, the fighter everyone wanted to sign afterwards was Canadian.

Reporters in Las Vegas covering Lloyd Honeyghan-Marlon Starling discovered a link between Maloney and Olympic super-heavyweight champion Lennox Lewis – and rang to tell him the news.

“They said: ‘Imagine how good it would be to have a British world heavyweight champion?’” remembered Maloney. “I said there wasn’t much chance of that because Frank Bruno and Gary Mason were with Mickey Duff.

“But they told me the Olympic super-heavyweight champion, Lennox Lewis, was from West Ham and that his brother, Dennis, knew my brother, Eugene. I checked it out and it turned out to be true.

“I pursued Lennox on the ‘phone. Lennox wanted to come to Britain to see his brother and said if I got him two round-trip tickets, he would come and see me. I got a credit card and used it up to its limit to get Lennox over here.”

Maloney convinced a sports management group, the Levitt Group, to give their backing. “I told them having a British world heavyweight champion would be massive for them,” said Maloney and Lewis delivered, being crowned WBC belt-holder in December, 1992 after Riddick Bowe, stopped by Lewis in the Olympic final, refused to face him.

That made Lewis the first British fighter to hold a version of the heavyweight championship since Bob Fitzsimmons, born in Cornwall and raised in New Zealand, had lost to James J Jeffries in 1899.

Bruno had been beaten by Tim Witherspoon and Mike Tyson, but kept his place in the public’s affections and the majority of fans rooted for him when he fought Lewis in ‘The Battle of Britain’ at Cardiff Arm’s Park in October 1993.

Bruno had the accent and dashed-hopes story that appealed to British fans and at the midway point, he had landed enough jabs to be ahead on one scorecard, with the other two judges having the fight level.

The fight did seem to be turning Lewis’ way, however, and after he smashed Bruno on the chin with a left hook, he didn’t allow the challenger to recover, teeing off with right hands until the referee jumped in.

BENTT had been brought in to give a rusty Tommy Morrison rounds before he challenged Lewis.

Bentt didn’t even give him one round. The fight was all over in 93 seconds. Morrison was down three times and Britain had another belt-holder, albeit at a time when the WBO strap, particularly at heavyweight, was barely respected.

Not that many realised Bentt was a Brit.

Bentt spent the first six years of his life living with an aunt in East Dulwich before settling in New York and he represented the United States at the 1986 World Championship, where he beat defending champion Alexander Yagubkin on his way to the bronze medal.

Beaten inside a round on his pro debut, Bentt went on to shock Morrison and was the home fighter when he defended the WBO title against Hide at the home of Millwall Football Club, The Den.

Bentt wore a Millwall hat at a press conference – before Hide knocked it off his head.

Hide later claimed Bentt grabbed his genitals during the “ugly mess” and both were fined £10,000, John Morris, the General Secretary of the Board, describing them as “two stupid young men.”

Only 22 years old, Hide was smart enough to know he had to keep away from Bentt’s right hand.

Bentt couldn’t get out of the way of Hide’s right uppercut in the third round and ended up on the floor.

Hide dominated until the seventh-round finish, Bentt saying afterwards: “Anything I tried, he had an answer for.

“His rhythm was completely unconventional – and he could punch like an atomic bomb. The guy could crunch.”

Bentt only has hazy memories of the fight. He was taken to hospital afterwards and spent 98 hours in a coma before making a full recovery.

Born in London, he was raised in Nigeria and returned to England as a teenager to pursue a boxing career – against the wishes of his father. The gangling Akinwande left Britain for Florida after 27 professional fights (one draw), feeling underappreciated and with Don Turner in his corner, he claimed the vacant (and still lightly-regarded) WBO title in style, laying out Jeremy Williams with a pinpoint right hand in three rounds.

That was followed by a 10th round stoppage of Alexander Zolkin in Las Vegas and on the undercard, Welch outpointed Daniel Eduardo Netto.
The Argentine had previously fought for the WBO title, losing in two rounds to Francesco Damiani, and beating him made “The Brighton Rock” the mandatory challenger for Akinwande’s belt.

Welch was up against it. In 32 previous fights, nobody had found a way to beat Akinwande. Many had struggled to even lay a glove on him.

Akinwande was 6ft 7ins – the tallest boxer in the world – and had a 82-inch reach that he used to keep opponents off him. Shorter by five inches, Welch knew he wasn’t going to outbox Akinwande, but fancied he could outfight him.

He tried to start a fight with Akinwande at a press conference and had to be held back during the referee’s instructions, but after the bell went, Akinwande stuck to the game plan. He got Welch on the end of his jab – and kept him there. For 12 rounds.

It wasn’t until the fifth round that Welch had only notable success. Akinwande felt the force of his right hand and wrapped his arms around him.
Welch did well to get through the sixth and seventh rounds and got the crowd behind him when he lashed out with a 10th-round right hook that smacked Akinwande flush on the jaw.

Akinwande took a couple of steps back, banged his gloves together and waved Welch forward. Akinwande made the next move, landing a crunching right to Welch’s jaw and the one-sided contest continued.

Trainer Jim McDonnell pulled out a photograph of Welch’s two year-old son Tommy – now an unbeaten pro – before the final round and implored: “Do it for him!” but the task was too great and at the final bell, only one of the three judges had given the challenger a round.

“I couldn’t up the pace,” said Welch. “Perhaps the occasion got to me.”

THERE was more than Lewis’ WBC belt at stake at Caesar’s Tahoe in Stateline, Nevada.

Two weeks earlier, Mike Tyson had been thrown out of his rematch against Evander Holyfield for biting off a chunk of his ear and John Morris, the General Secretary of the British Boxing Board of Control and a WBC supervisor, spelled out the importance of Lewis-Akinwande to the sport.
He said: “This is a fight which can make a new start for heavyweight boxing, show that its spirit and image does not have to be dragged into the gutter.

“This is the first fight since Tyson bit the ear of Holyfield and Lennox Lewis and Henry Akinwande are not just fighting for themselves, but for the real meaning of their sport. I know them well and I know they are good fighters and good men.”

Not everyone in England was fond of Akinwande.

He said before the fight: “Everywhere I go, except England, people love watching me.”

Fans in England may have remembered the 1986 ABA heavyweight final when Akinwande threw himself on the canvas after being disqualified against Eric Cardouza, from Northampton, or his reaction to his exit from the 1988 Olympics in Seoul.

Akinwande said: “I didn’t believe in myself. What can I do ?”

He didn’t talk with much confidence in the build up to the fight with Lewis, either, and, after being told off by referee Mills Lane, who had also been in charge of Holyfield-Tyson II, inside the opening minute for holding, he lost a point in the second.

Trainer Don Turner tried to drag some fight out of his fighter, telling him: “He’s hitting you because you’re not hitting him” and in the third round Akinwande hit Lewis with a clobbering right that appeared to make the champion’s knee graze the canvas.

Lane would later admit he should have given Lewis a count, but he got it right in the fifth round when he dragged Akinwande off Lewis, telling him: “That’s it, you’re gone” before pushing him back to his corner.

Reporters noticed Akinwande was close to tears at the post-fight press conference.