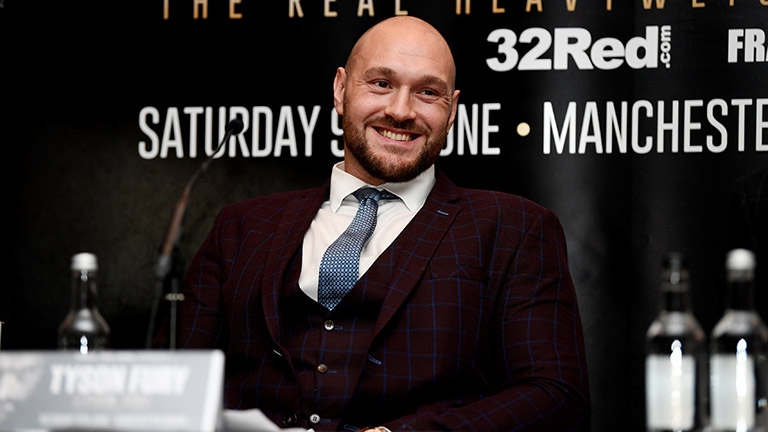 SATURDAY June 9 sees the anticipated return of the charismatic enigma that is Tyson Fury. It’s been almost three years since we saw Fury wrench the heavyweight titles from then long reigning champion Wladimir Klitschko on a fateful night in Düsseldorf. That triumphant night was meant to usher in a new era for heavyweight boxing, the Klitschko reign was over and the Fury reign was just beginning. That, however was not meant to be. What followed was a tumultuous journey for the lineal heavyweight champion. It was a journey that saw Tyson battle challenges outside of the ring that were more difficult and dangerous than those he had faced in his 25-fight unbeaten professional career. Tyson Fury is now ready to return to the fight game and the world eagerly awaits…

A career comeback is inevitably loaded with questions that are waiting to be answered. Tyson Fury’s return is no different:

What does Tyson need to do to solidify his comeback?

Firstly, before we begin to salivate at potential blockbuster showdowns against Anthony Joshua and Deontay Wilder we need to see Tyson Fury active again. When I talk of being active I don’t mean just this comeback contest. I would like to see Tyson with a regular schedule of contests against opponents of perceived increasing difficulty. This would do two things; 1) build momentum with fans and boxing media & 2) build Tyson’s confidence (not that it appears to have taken a hit!).

Being out of the ring for so long would normally see some fighters’ “stock” drop, their marketability and fan appeal would lessen. Fury’s absence however appears to have had the opposite effect, giving credence to the phrase “absence makes the heart grow fonder”. While Fury is currently riding the crest of a popularity wave caution is reserved as fans can be both impatient and unforgiving. This comeback fight and his return in general will be about much more than just winning. Tyson now finds himself in the position of win and look impressive in order to capitalise on his increased fan appeal. Will the absence of his uncle, trainer and known disciplinarian Peter Fury in his corner see a much more fan friendly Tyson return? During his absence Tyson found himself being viewed as the man to come back and take the division by storm. From a fan’s perspective it is imperative that the performances match the lofty expectations.

Tyson Fury’s battles outside the ring have been well documented, none more so than his battle with the scales. In his peak fighting condition in Düsseldorf Fury tipped the scales at nearly 17 ½ stone in tremendous condition. He was nimble, light on his feet and showed terrific reflexes. In the depths of his despair Fury was reportedly weighing in at a whopping 25 stone. Fury deserves a lot of praise and credit for getting himself back into fighting condition and while he has shown tremendous dedication to get that weight off, it is yet to be seen what kind of effect it will have on him physically. We have to take into consideration that Fury was/is a fighter who relies greatly on reflexes, timing and speed. How this huge fluctuation in weight will affect those things is one of the biggest question marks of his comeback.

This comeback presents us with an age old question in boxing, one that sparks fierce debate; is ring rust real? Can you eliminate it during training camp? This is a topic that usually divides fans as some believe world class fighters do not suffer from ring rust and this is a testament to their preparation. I however sit firmly in the other group. From my own professional experience, ring rust is very real, how much it affects you can vary from person to person. While training camp will have got Fury into great condition and physically able to do things he used to do, doing them “under the lights” is a totally different scenario. Ring rust can rob you of that split second timing to slip a punch or that confidence to fire the hard counter shots at the right moment. These are only things that come with ring time, which again leads to me wanting to see Fury have a regular run of action.

Can Fury stack up against AJ and Wilder and what can we hope for 2018?

I feel that stylistically Fury matches up well with both champions. At his best he was a towering virtuoso capable of gliding around the ring and stinging opponents with hurtful counters. Joshua’s last performance against Joseph Parker and the struggles he seemed to have with Parkers box and move style has given great traction to the argument that Fury would be able to move, dance and outbox Joshua should the two meet. While Fury has always been seen as a difficult match up for Wilder given his size and boxing skills, this hasn’t changed, what has changed potentially is what Tyson Fury now has to offer. There is an air of looming inevitability around these showdowns but I feel as fans we will have to bide our time and wait a little longer. 2018 must be about regaining form and familiarity within the ring. Let Tyson use 2018 to get the ring rust off, let the fans see him and get excited about him being in the ring again then bring on the mega fights. I for one am looking forward to this chapter of Tyson Fury’s career, the best may well still be yet to come.

Aarron Morgan is a professional fighter and personal trainer. Find out more here