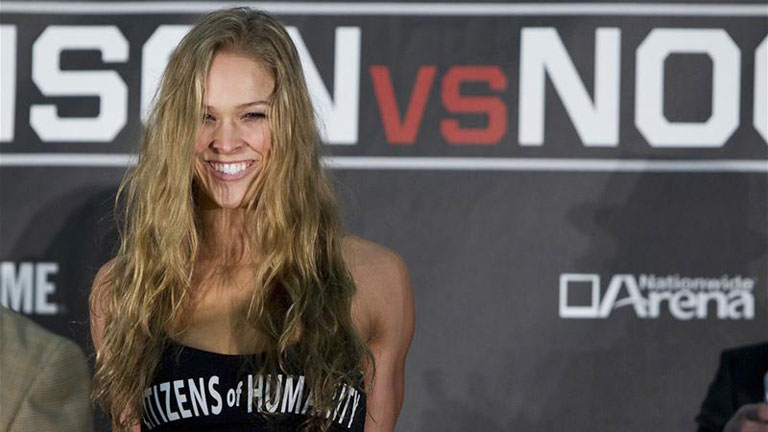 Boxing should have a Ronda Rousey phenomenon of its own, writes John Dennen

It’s hard to chalk this up as a win for boxing, given that Holm took out Rousey with a hefty kick (a rare move in boxing circles, Alex Ariza excepted). But Rousey has captured the attention of the sweet science and this particular defeat, against an underdog, prompted much comment. Two heavyweight legends took to Twitter on the matter. Lennox Lewis said, “I’ve found myself in the same place as ‪Ronda Rousey and I used it to regain focus and motivation. She must learn from it AND improve [her] game plan!

“Ronda’s boxing skills were exposed as almost amateurish by a true pugilist who found she could push that straight left out each time.”

George Foreman referred to himself and his great rivals, Muhammad Ali and Joe Frazier, saying, “Down goes Muhammad, down goes Frazier, down goes Foreman. We all came back.

Floyd Mayweather, who had swapped verbal barbs with Rousey in the media, took the high ground in the end, telling FightHype: “It’s just like boxing; you win some, you lose some. A true champion can take a loss and bounce back… I think that everything is just a learning experience. In due time, she’ll be able to bounce back and make some noise again in mixed martial arts.”

There is a temptation to take a gleeful delight in seeing a proud, haughty icon brought low. But it should be resisted. Single-handedly Rousey, with her confidence and persona as well her ability, essentially created the women’s division of the UFC when she didn’t have much in front of her to beat. That is a tremendous achievement. She created a platform for other women in mixed martial arts and demonstrated that a female fighter could become a major star.

There’s no reason why boxing can’t have it’s own Ronda Rousey. With the right promotional support the blueprint has been laid out. The sport already has ready, Olympic made icons, in Katie Taylor and Nicola Adams. They are very different personalities to Rousey but strong characters with outstanding boxing ability. Why can’t they become the pay-per-view stars of the future? Surely female boxing is a massive opportunity just waiting for someone out there to make the most of it.