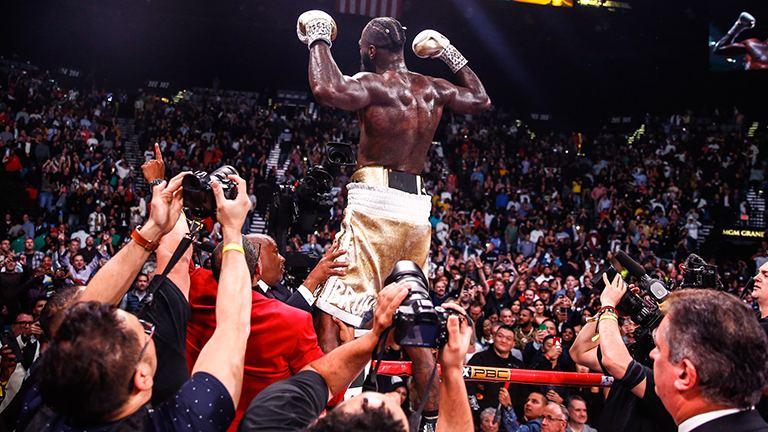 Deontay Wilder laying out Luis Ortiz with a monster right hand out of nowhere in Las Vegas.

The shuddering straight right from Deontay Wilder against Dominic Breazeale that made the Brooklyn crowd gasp upon impact; Sam Maxwell putting an end to Sabri Sediri’s mocking in Leicester by levelling him with a right hook; The devastating right hand from Yunier Dorticos that put Andrew Tabiti to sleep in Riga, Latvia; Nonito Donaire’s classic one-punch left hook knockout of Stephon Young in Lafayette, Louisiana; The wicked right hand from Vergil Ortiz Jnr that removed Mauricio Herrera from consciousness in Las Vegas; Joshua Buatsi’s mammoth right hand that thundered into Liam Conroy’s chin in Stratford, pitching him headlong into the canvas; Dave Allen’s pulverising left hook to the body that dispatched Lucas Browne in Greenwich; The swift and powerful overhand left from Jazza Dickens that landed square on Nasibu Ramadhan’s jaw in Liverpool; Pawel August’s breathtaking left hook to the liver which rendered Robert Halas unable to beat the count in Torquay; Gabe Flores Jnr’s caterwauling check left hook that flattened Eduardo Reis in Stockton, California; Marco McCullough’s short right hand that dropped Declan Geraghty hard in Belfast; The sizzling, picture-perfect overhand right from Devin Haney that left Antonio Moran lying catatonic on the mat in Oxon Hill, Maryland; Gennady Golovkin loading up on a bone-chilling left hand that decked Steve Rolls face-first in New York; James Metcalf’s spiteful left to the body that sent Jason Welborn to his knees in Leeds; Jermell Charlo’s textbook one-two combination that instantly felled Jorge Cota in Las Vegas; The highlight-reel counter left from Miguel Angel Gonzalez that left Saul Rodriguez stretched out on his back in Temecula, California; Marcus Morrison’s thumping right hand down the middle that accounted for Emanuele Blandamura in Rome; The brutal five-punch combination from Dereck Chisora that wiped out Artur Szpilka in Greenwich; Mikael Lawal’s booming left hook that floored Damian Chambers heavily in Altrincham; The crunching left hook at the end of a savage sequence from James Tennyson that left Atif Shafiq with his legs folded beneath him in Greenwich; Archie Sharp’s left to the chin of Declan Geraghty in Kensington that was so powerful the fight was instantly halted; Kazunori Nakayama’s explosive left hand that knocked Lerdchai Chaiyawed out cold in Kariya, Japan.

Andy Ruiz Jnr w rsf 7 Anthony Joshua
Against all the odds, Ruiz – a replacement opponent and 12-1 underdog – turned the boxing world on its head by dropping Joshua four times and taking his world heavyweight titles.

Michael Conlan – A hat-trick of victories for the hugely popular Belfast boxer in 2019, capped off by a win against his old amateur foe Vladimir Nikitin.

Dan Sarkozi. After two years out of the ring following a stroke and heart surgery, Sarkozi incredibly returned to action in 2019. He even won both of his fights.

Heroes of the year

Mark Prince (OBE), Colin McMillan (BEM) and Costas Evangelou (MBE) being honoured in the Queen’s New Years Honours list for services to their local community. Amanda Serrano becoming a seven-weight world champion. Mickey Helliet celebrating his 100th promotion. Lewis van Poetsch and Qasim Hussain becoming boxing centurions. Colin Lynes carrying out excellent work in the community. Claressa Shields and Katie Taylor collecting all four major world titles to become undisputed champions at middleweight and lightweight respectively. Joshua Buatsi and Cheavon Clarke supporting the Reaching Higher foundation. RJ Draper winning the Schools Championships for a second time, having previously been in a coma having suffered two broken legs and a bloodclot on the brain after being run over by a van. Dominic Bergonzi forming the Gloves Up, Knives Down group. Various figures raising money towards the Ringside Rest and Care Home for ex-boxers. Milambo Makani and Dwayne Musaka co-founding the Knock Out Crime project. Naoya Inoue and Nonito Donaire demonstrating first-class sportsmanship before, during and after their fight.

Most improved fighters of the year

Lionhearts of the year 2019

Caleb Plant – whose daughter passed away at the age of 19 months after suffering from a rare medical condition – becoming a world champion; Badou Jack fighting from round seven through to the end of round 12 against Marcus Browne with an almighty vertical gash down the centre of his forehead; Ryohei Takahashi putting forth an admirable showing against TJ Doheny in a world title challenge, despite only taking the fight on two weeks’ notice; Ted Cheeseman going the full 12 rounds with Sergio Garcia, despite shipping some heavy punishment throughout; A blood-smeared Lee Selby fighting through cuts above both eyes to defeat Omar Douglas; TJ Doheny putting in an inspirational effort against Daniel Roman; Jamel Herring winning a world title on what would have been his late daughter’s 10th birthday; Dec Spelman – wearing the name ‘Westgarth’ on his waistband – claiming the English belt 15 months after Scott Westgarth died following their fight; Steven Ward and Liam Conroy giving it everything in their violent, bloody thriller; Anthony Yarde enhancing his reputation in defeat by entering Sergey Kovalev’s backyard in Russia and putting in an immensely brave display; Tyson Fury having to contend with a horrendous cut from the third round onwards to overcome Otto Wallin; The swollen and wounded Josh Taylor and Regis Prograis displaying mind-boggling levels of heart and effort during their brilliant encounter; Naoya Inoue and Nonito Donaire sharing blood and guts during 12 rounds of thunderous action; Lee McGregor putting on a great fight with Kash Farooq in the same week that he found out about the death of his aunt; Alex Dilmaghani and Francisco Fonseca giving it their absolute all in an action-packed war; The ultra-gutsy Craig Evans – sporting a flattened nose after a clash of heads – battling on until the 11th round against James Tennyson.

Journeymen of the year 2019

Serious injuries in the boxing ring

Worst scorecards of the year 2019

(Interesting, and concerning, to note that this section has doubled since last year)

James Pierce (98-92) and John Madfis (97-93) scoring too widely in Chris Algieri’s favour against Daniel Gonzalez, in what was a very close fight; Don Ackerman’s absurd 113-113 scorecard in the Keith Thurman-Josesito Lopez bout; The too-wide tallies in favour of Can Xu against Jesus M. Rojas from Alfredo Polanco (116-112), Gloria Martinez (117-111) and Ignacio Robles (118-110); Massimiliano Bianco marking Sergio Garcia a much-too-narrow 115-114 winner over Ted Cheeseman; Howard Foster (114-112) and Jerome Lades (115-112) submitting too-close scorecards in favour of Chris Eubank Jnr against James DeGale; Kenny Pringle’s 95-95 vote in the Jay Byrne-Stefan Sanderson clash – a contest that the two other judges rightly scored in favour of Byrne; David Seymour winning 58-56 for Shaun Messer against Khvicha Gigolashvili, when the latter looked to have done more than enough to have his arm raised; Terry O’Connor’s particularly wide 118-110 card favouring Robbie Davies Jnr over Joe Hughes; Rocky Young (115-113) and Waleska Roldan’s (116-112) more-than-charitable scorecards in favour of Jaime Munguia against Dennis Hogan; Craig Metcalfe and Gerald Ritter adjudging Srisaket Sor Rungvisai to have lost by only two points (115-113) against Juan Francisco Estrada, who warranted a wider win; Lamont Roach taking a unanimous verdict (97-92 for Dave Moretti and Richard Ocasio, and 96-93 for Steve Weisfeld) over Jonathan Oquendo, despite the latter appearing to have done enough to get the nod himself; Steve Gray bemusingly scoring the Chris Blaney-Owen Jobburn clash a 38-38 draw, when Blaney looked to have won handily; The off-the-mark 95-95 cards of Brian Costello and Mark D’Attilio that cost Matvey Korobov a deserved victory over Immanuwel Aleem; Terrell Gausha bizarrely being denied a merited win over Austin Trout due to the tallies of Bill Hunter (95-95) and John Dixson (96-94 Trout); Dave Braslow’s preposterous 38-37 card in favour of Robeisy Ramirez, who was clearly second best against Adan Gonzales; Robert Williams and Terry O’Connor both scoring the Brad Foster-Lucien Reid fight a 114-114 draw, when it looked as if Reid warranted the victory; Kristian Touze being awarded a 97-94 win from Reece Carter over Angelo Dragone, leading to gasps of astonishment, followed by a cacophony of boos from the crowd; Andrew Selby receiving a 76-74 verdict from Darren Maxwell over Fadhili Majiha, despite being knocked down in two of the eight rounds; The marks of Robin Dolpierre (115-113) and Fabian Guggenheim (116-112) resulting in a debatable home decision for Matteo Signani over Gevorg Khatchikian; Max DeLuca (95-94), Lisa Giampa (95-94) and Eric Cheek (96-93) making Joshua Greer Jnr a highly suspect winner against Antonio Nieves; Domenico Valentino being on the wrong end of a very bad decision against Francesco Patera (Sergey Litunov 117-110, Grzegorz Molenda and Ernst Salzberger 117-111); Francesco Rega (97-93) and Ammar Sakraoui (98-92) gifting Maxim Prodan the win against Tony Dixon; The puzzlingly wide totals of Howard Foster (97-93) and Steve Gray (98-92) in favour of Anthony Crolla against Frank Urquiaga; Alejandro Rochin’s hard-to-fathom 120-107 scoreline for Nordine Oubaali over Takuma Inoue; Francisco Alloza Rosa, Jose Roberto Torres (both 116-112) and Terry O’Connor (117-111) posting overly wide margins in favour of Callum Smith against John Ryder; Michael Hunter seemingly cruising over the finishing line against Alexander Povetkin, only to be denied a victory by Yury Koptsev (115-113 Povetkin) and Glenn Feldman (114-114).

Paying tribute to the members of the boxing fraternity who passed away in 2019. Apologies for those we may have missed