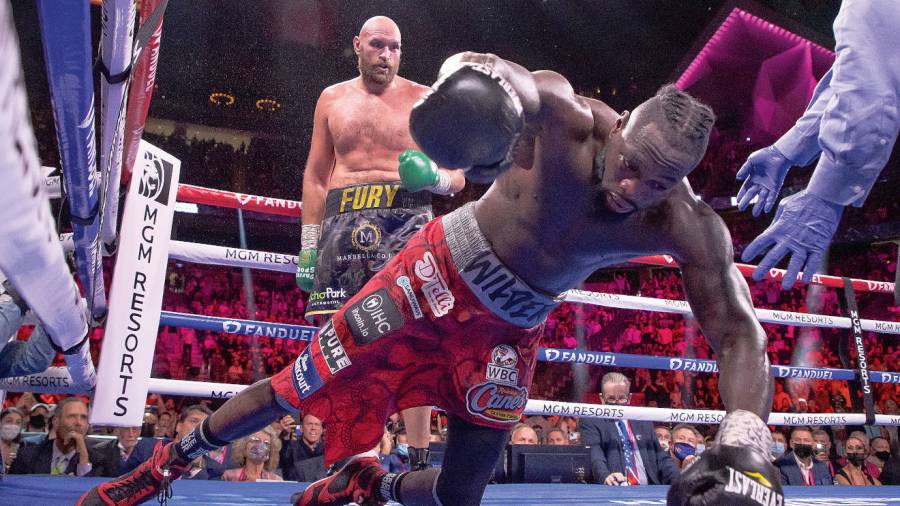 WORLD FIGHT OF THE YEAR 2021
In a year full of excitement, these contests made us stop and stare in wonder

1. TYSON FURY w ko 11 DEONTAY WILDER
Rightly labelled as one the greatest heavyweight title fights of them all. Wilder recovered from a torrid opening three rounds, getting off the canvas in the process, to haul Fury into a hellish battle. Tyson somehow survived a stunning fourth to regain control but Wilder had further moments of success before the finish.

2. JUAN FRANCISCO ESTRADA w pts 12 ROMÁN GONZÁLEZ
González again exhibited why he is one of the greatest fighters of the modern era. That Estrada won, by boxing beautifully, aggressively and smartly, speaks volumes for his quality.

3. GEORGE KAMBOSOS JNR w pts 12 TEÓFIMO LÓPEZ
The surreal scene started to unfold in the opening round as Kambosos decked the onrushing favourite. López dropped George in the 10th but it only enlivened the challenger. Heck of a fight.

4. JERMELL CHARLO D pts 12 BRIAN CASTAÑO
At times, the classier boxing of Charlo looked like it was going to be overrun by the sheer aggression of Castaño. Ringsiders who felt Castaño had done enough were appalled by the scorecard that favoured Charlo by 117-111. But the draw was fair.

5. SAM EGGINGTON w pts 12 BILEL JKITOU
If ever in doubt about the gruelling nature of our sport just watch this 12-rounder. The slugfest swung both ways but, in the end, the beyond courageous Eggington deserved to take the super-welterweight bout on the cards.

6. JOSH TAYLOR w pts 12 JOSÉ RAMÍREZ
The fight seemed to be slipping away from Ramírez when he was dropped in the sixth and seventh rounds but he rallied with gusto to make this 140lbs showdown every bit as good as we expected.

7. ÓSCAR VALDEZ w ko 10 MIGUEL BERCHELT
Some fancied the educated pressure of Berchelt to prevail but in the end it was Valdez who was smarter in the face of some boiling hot warfare. The one-punch finish to end matters was chilling.

8. STEPHEN FULTON w pts 12 ANGELO LEO
Some may have preferred Fulton’s win over Brandon Figueroa but, for us, his win over Angelo Leo at the start of the year was a marginally better contest. Either way, Fulton is one to watch in 2022.

10. TERENCE CRAWFORD w rsf 10 SHAWN PORTER
Fights don’t have to be rock ‘em sock’em bloodbaths to enthrall. This was boxing at elite level between two of the best welterweights of recent years. Crawford, in the end, got the job done.

BRITISH FIGHT OF THE YEAR 2021