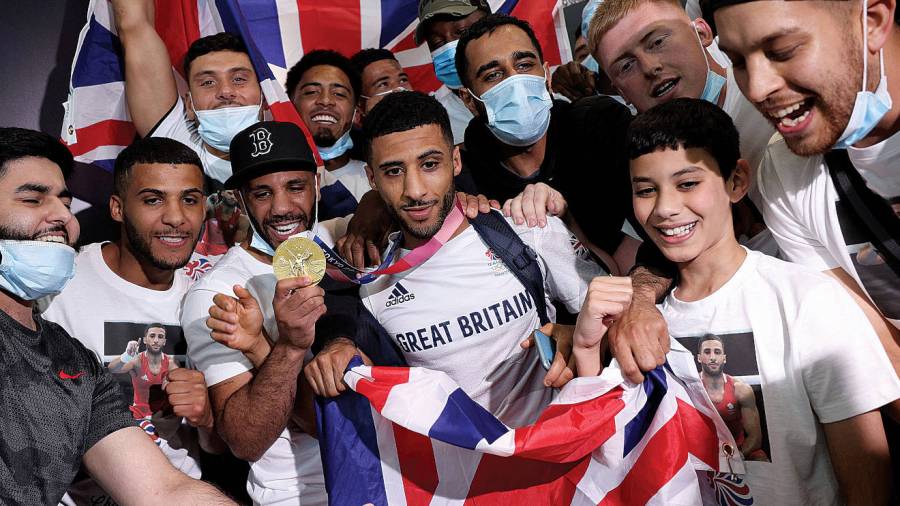 Galal Yafai and Lauren Price are the male and female amateur boxers of 2021. John Dennen reviews the Olympic year

BRITISH boxing has never had a year like 2021. It surely won’t again for another century. Amid a global pandemic, that for the first time in their history saw the Olympic Games postponed but completed, the GB team secured its best medal haul at the Olympic boxing tournament in a hundred years.

The Great Britain squad was outstanding, winning six medals in total at the Tokyo Games. Karriss Artingstall and Frazer Clarke both won bronze. Ben Whittaker and Pat McCormack reached the finals, only losing to excellent Cuban opposition and securing highly impressive silver medals. But brilliant Olympic gold medallists Galal Yafai and Lauren Price have to be 2021’s male and female amateur boxers of the year.

2021 began with uncertainty. The impact of the pandemic made it hard for athletes to train as normal and travel to competitions overseas. There was the worry that the Games, even though they had been delayed, could still be cancelled. The Olympic qualification process had to be restructured, reduced to one continental tournament. It heaped pressure on those boxers who only had this one opportunity to make to Tokyo. It’s testament to GB that they assembled a strong team of 11 for Japan, all of whom could compete at the top level. As well as the six boxers who would go on to win medals, Charley Davison, Caroline Dubois, Peter McGrail, Luke McCormack and Cheavon Clarke all qualified. They didn’t finish on the podium in Tokyo but all are Olympians and boxers of the highest calibre.

Yafai had been one of the few boxers to qualify in 2020 just before the event was suspended. But he went into the Games underrated. He hadn’t won gold at a Europeans before or medalled at a World championships. He was actually disqualified (albeit harshly) in the final of the European qualifier. But he knew all along if he performed in Tokyo he could beat anyone.

“To be the favourite you have to be World champion, you’ve have to be a Pat McCormack or a Lauren Price, win pretty much everything prior to the Olympics so I knew I wasn’t the favourite,” Galal reflected. “I just made sure I was ready whatever happened.”

Lauren had the burden of high expectations. She was the World and European gold medallist. She was favoured to win at 75kgs. But at the start of 2021 she lost twice in minor warm-up tournaments to her great rival, Nouchka Fontijn. But the Welsh middleweight had taken a confidence boost from winning the qualification event in fine form. In the Games themselves Price kept her composure and boxed expertly, beating Fontijn in a tight, intense semi-final before outclassing China’s Li Qian to win gold.

“A dream come true, literally that,” Lauren said. “It was a great feeling standing on top of the podium. It was even better because six of us won medals and obviously it was even more special for me doing it alongside Karriss.

Both Yafai and Price impressed with their different styles, Price with her presence of mind, speed of movement and coolness under pressure, Yafai with his high octane, high-pressure approach that saw him handing out counts, knockdowns and stoppages to some of the best boxers in the world.

“I knew I had it in there,” Galal said. “I thought these kids can’t take the pressure and I thought I’m just going to stick it on them.

“It was nice to be mentioned [as one of the boxers of the tournament]. I’m not being harsh on myself but a lot of [the other gold medallists] are better than me technically. I think the only reason I was in the conversation was I made it exciting. I don’t think I’m as good as some of them fighters, you’ve got Andy Cruz, you’ve got [Roniel] Iglesias, you’ve got Arlen López. I’m happy to say they’re better than me. I just think I made it a bit more exciting.”

Both were celebrated on their return from the Games. Yafai was greeted by a host of supporters, friends and family at the airport. Price enjoyed similar scenes when she came back to her hometown. Galal began to appear on television, alongside Frazer Clarke they beat the Brownlee brothers on a Question of Sport. Price was not only awarded the National Lottery’s Olympian of the Year prize but also won the BBC’s Welsh Sports Personality of the Year. Both became stars in 2021, with offers and interest from professional promoters flooding in.

“It’s good to get recognition for the sport that I love, but the main thing for me and my priority is boxing,” Galal said. “It’s great to be invited to these events… But I’m just a fighter at the end of the day.

“I won five fights in Tokyo so I get a bit more respect, which is great, but I’m a fighting person and I just want to fight and win world titles.”

Price reflected, “When I came home Wales went mental and even still I’m walking about and people recognise me and stuff like that. It was great coming back and having that support. When we were out there I didn’t realise with the time difference and stuff like that how many people watched and supported.

“It’s been crazy. Winning Olympian of the Year and the Welsh Sports Personality of the Year, that kind of topped my year off as well. That’s something I’ve always wanted to win.”

Their team excelled. Karriss Artingstall was the Army’s Sportswoman of the year, Caroline Dubois and Frazer Clarke have signed to turn pro on Sky Sports, the McCormack twins, who have a mass of silverware from every level of amateur boxing between them, will turn over with new promoter Probellum and Peter McGrail has already boxed twice on Matchroom shows in his Liverpool hometown. The 11 GB Olympians will continue to make waves in 2022.

“Delivering Great Britain’s best medal haul since 1920 was a historic performance by a fantastic group of boxers, and to be part of the team that helped them to achieve this was, from a personal point of view, one of the most enjoyable experiences I have had during a 30-year career in sport,” GB performance director Rob McCracken wrote.

Aidan Walsh secured a bronze medal for Ireland in Japan but due to an injury was unable to contest his welterweight semi-final with England’s Pat McCormack. An honourable mention should go to Kurt Walker, whose stirring victory over imposing Uzbek World champion Mirazizbek Mirzakhlilov opened up the featherweight division. Walker has subsequently signed a deal with US promotional powerhouse Top Rank. But the star of the Irish boxing team at the Tokyo Games was lightweight Kellie Harrington. She won gold in a competitive division to achieve a heart-warming result. Down to earth as ever, Harrington would return to work as a part-time cleaner at a psychiatric hospital. She is the international female boxer of the year.

Brazil’s Hebert Souza leapt to prominence when he sensationally knocked out Ukraine’s formidable gold medal favourite in the Olympic middleweight final. But Andy Cruz is the male international boxer of the year. Part of a superb Cuban team, he won Olympic gold and followed it up shortly afterwards with a third World championships gold medal.

The Olympic cycle keeps on turning. There are only three years until Paris 2024. It was hard enough for the Tokyo Olympians to get in warm-up tournaments this year. The Paris Olympic hopefuls are having to make up for lost time.

“The break-up of a team at the end of an Olympic cycle is something we have come to expect as many of the boxers choose to pursue careers in the professional ranks. The coaches and I plan for this throughout every Olympic cycle and one aspect of our job that often goes under the radar of everyone but the most committed boxing fans is the work we do to develop the next generation and ensure we have a new cohort of men and women ready to take the places of those boxers that choose to leave the world class programme,” Rob McCracken noted.

“A key part of this development process is taking the boxers to international tournaments and training camps around the world. However, the Coronavirus pandemic meant this has not been possible over the last 12 months and has denied this current group the exposure to different styles and opponents that is so helpful in accelerating development.”

A new-look GB squad did go to the World championships. None medalled but young Conor Tudsbury came close, after having to move up out of his natural weight class as well, and super-heavyweight Delicious Orie, among others, looks a good prospect.

The exploits of Scotland’s Reese Lynch deserve to be highlighted even in the shadow of the Olympic Games. He wasn’t then on the GB squad but at the Worlds the 20-year-old from Springhill rose to the occasion and secured a bronze medal at 63.5kgs. The Scotland team is progressing and, with strong English and Welsh squads, that suggests a competitive Commonwealth Games to look forward to later in 2022.

There ought to have been a women’s World championships in 2021. Those were due to take place in Istanbul in December, postponed with just a month’s notice until March, so harsh when the boxers were already deep into their training camps and the men’s Worlds did manage to go ahead. When they do happen this year, this tournament will be a key moment for the IBA, formerly known as AIBA, to demonstrate they have made progress with reform, a process that will be essential if boxing is to be restored to the 2028 Olympics. The boxing tournament at the Tokyo Games was a magnificent event with excellent contests and fair judging but it was run by a special Task Force after the IOC suspended AIBA. The new-look IBA trying to follow the IOC’s pathway to save Olympic boxing will be one of the key stories to follow over the year to come.

Doubt and uncertainty remain in boxing’s future, but the Olympic Games in 2021 was still a spectacular moment the showcased the sport’s potential.

The unsung heroes of the year however have been the coaches, volunteers and officials who kept their clubs running, and got the domestic championships over the line, under the most trying of circumstances.