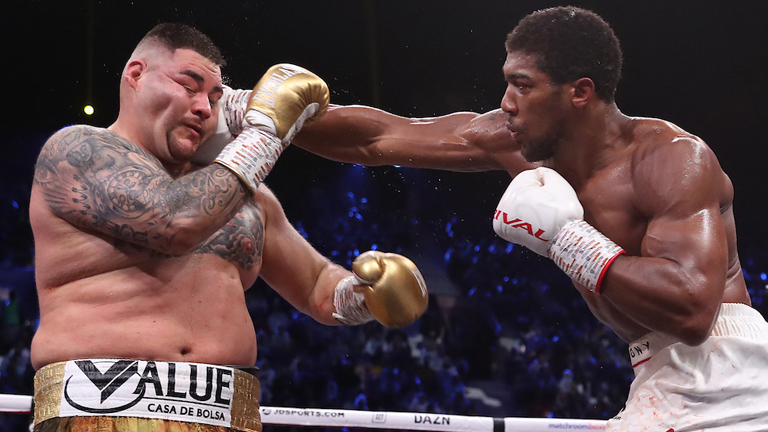 IN a quiet period for boxing content, unified world heavyweight champion Anthony Joshua opened himself up to the media in the wake of his revenge win over Andy Ruiz Jnr. Sky Sports invited him down to their studios for a rather fluffy interview with presenter Rob Wotton, who literally started it off by describing it as his “Christmas wish come true.”

This particular interview created headlines everywhere when, as things were wrapping up, Joshua offered to spar with Tyson Fury in order to help him prepare for his rematch with Deontay Wilder. It was a baffling thing to say – Joshua did walk it back in an interview with IFL the following day – but his reasoning was that he wants Fury to win, because he thinks a fight with Tyson is easier to make.

Another interesting comment from Joshua was how he would prefer to enter the ring first for every fight – even if he’s the defending champion – as it allows him to absorb the atmosphere and get used to the ring.

His attention was then turned to what’s next, and he humorously slipped up when looking at his two mandatories, Kubrat Pulev and Oleksandr Usyk; “I want opponents like Pulev [tuts] – not Pulev, Usyk.”

Joshua further confirmed this when he admitted he’s been studying Usyk for a while – a wise move. Though it looks like it’ll be Pulev next, it’s clear that Joshua would much rather fight Usyk.

IFL released a couple of interviews with Eddie Hearn over the festive break, the first of which saw the promoter admit that Joshua, Wilder and Fury “all need each other” and that 50-50 splits between them could be an option. It’s the first time he’s said so; a glimmer of hope for getting those blockbuster fights made.

The second was a much longer discussion, with Hearn reflecting on 2019 and being taken through most of his stable one by one to look at their near futures. WBA super-flyweight champion Kal Yafai is in talks to face former pound-for-pound king Roman Gonzalez, while both Callum Smith and Billy Joe Saunders have been put forward as opponents for Canelo Alvarez. If neither get the fight, Hearn will look to pair them against one another.

Hearn confirmed Sky Sports have bid for the Wilder-Fury rematch, though Frank Warren – who is aligned with BT – in a separate interview with IFL claimed that it is up to BT Sport whether they air the fight or not, and expects an announcement soon.

BT Sport’s Adam Catterall sat down with UFC President Dana White about his impending assault on boxing, and straight off the bat White confirmed that he’s made a deal with Floyd Mayweather for the 42-year-old to return this year. He says it could be a boxing or a “crossover” fight, like his circus with Conor McGregor. Frustratingly, Catterall then asked White about KSI-Logan Paul II, rather than pursuing more details on the Mayweather news.

However, he did get White’s views on boxing broadcasts and how he will do things differently. He pulled no punches on DAZN, describing their production value as “horrendous”. In fairness, the UFC’s broadcast deal with ESPN makes DAZN a direct competitor of his.

He also said that the shows he’ll work on will be similar to UFC cards – they would move a lot quicker, with no long ring walks, and he claims they’ll be a lot “slicker” than everything that’s currently out there. He’s a captivating speaker and undoubtedly a great promoter; it’ll be fascinating to see what impact he has on the boxing world.

TMZ posted bodycam footage from police officers attending the aftermath of Errol Spence Jnr’s car accident last year. The two videos first show officers seeking a blood sample from those looking after Spence in hospital, while the second shows them finding a handgun at the scene of the accident – however they could not link the firearm to Spence and so he does not face any legal issues over the weapon.

GIVEN the time of year, there was a lot of reflection on both the past year and the past decade among boxing podcasts over the last couple of weeks. All the usual awards were dished out – no prizes for guessing which fight won Upset of the Year on every pod – with Canelo Alvarez being named Fighter of the Year and Floyd Mayweather Fighter of the Decade across the board.

JUST before Christmas, both Sky and BT aired UK shows featuring their rising young talent, though BT’s card was noticeably superior. Topped by heavyweight prospect Daniel Dubois, the unbeaten Londoner is being provided with an excellent platform and continues to impress on it. BT and Frank Warren are clearly confident in their man despite his relative inexperience as a pro – and they’ve even begun talks to match him with Olympic medallist Joe Joyce this year.

They shrewdly stuck fledgling pro Tommy Fury as chief support despite it being just his third fight – his successful stint on Love Island in the summer has made him a legitimate star with younger audiences and BT are more than happy to leverage that. His first-round win had hundreds of thousands of YouTube views just days after.

Sky’s offering was headlined by unbeaten cruiserweights Richard Riakporhe and Jack Massey clashing for the vacant British title, with a fairly standard undercard beneath it. It’s nothing groundbreaking, but these NXTGen shows serve as a useful showcase for young fighters.

THOMAS HAUSER wrote a deep dive on the current state of DAZN for boxingscene.com, with the first part dropping on Sunday (January 5). It’s no secret that DAZN has flooded the market with cash, and Hauser raises the positives and negatives of this, including how rival platforms have had to fork out huge sums as well.

“DAZN, ESPN, FOX and Showtime are now paying Tiffany prices for boxing. But they’re getting Kay Jewelers diamonds,” he writes.

Hauser rightfully claims that DAZN had the best schedule of any one platform in 2019 and notes that while this is good for subscribers, it’s not necessarily good for their investors. His argument is that DAZN’s business strategy isn’t sustainable in its current form, given how much money they’re spending.