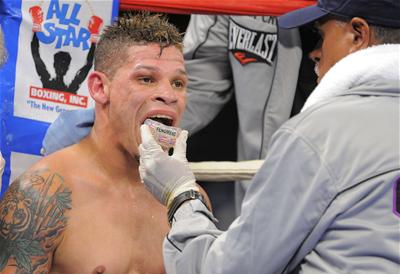 ‘THE INFORMATION HAS TO BE CLEAR’

Trains James DeGale and others TO be honest, I think there should be only one man speaking in the corner, I learnt that from being a fighter myself. You’re with your coach every day, so anything you relay to the boxer, he’ll understand you better than a strange voice. Anyone who has anything to say to my fighter has to go through me, and if I agree with it I’ll pass it on; listening to two-three voices gets confusing.Also, a fighter only remembers the last thing you tell them so you can’t tell them 20 things. The first 30 seconds of the interval, they are focusing on getting their breath back and getting their heartrate under control down, so you have to calm him. There’s no point providing lots of technical information at that stage.

After the 30 seconds have elapsed and he’s calm, then you can relay the things you have been working on week after week in the gym. That information has got to be clear and just one or two things because he won’t be able to absorb anymore.

‘PINPOINT THE TWO THINGS THEY NEED’

Coaches Liam Williams, Enzo Maccarinelli and more THE corner work between rounds can be vital, the difference between winning and losing. If the fight is comfortable, there’s not a great deal of impact but in a fight that’s to-ing and fro-ing, it can be crucial. When Enzo [Maccarinelli] fought Ovill [McKenzie] in Cardiff, a lot of people said his corner shaped the fight. Now, I’m not sure about that but it is an example of when a fighter needs a strong voice in the corner. Enzo needed to be more aggressive because he was in his shell a little bit, he’d got caught and my job was to convince him he had nothing to fear. He eventually got the job done in the 11th round. It’s important not to talk for the whole interval, you probably only get 45-50 seconds when you take into account them sitting down and standing up, but it’s vital not to speak for all that time. Let them breathe, take water onboard and pinpoint onetwo things they need to do. It’s paramount you don’t overload him with information and there should be only one voice in the corner.

‘THE CORNER IS WHERE YOU EARN YOUR MONEY’

Works with Curtis Woodhouse among others HOW you are in the corner depends on how well the round has gone obviously, but the main thing regardless is to remain cool and calm. You have to assure the fighter everything is under control, because he has enough to worry about already with the other guy trying to take his head off, without the corner panicking. The best part about the corner is that you can see things going on that sometimes your fighter doesn’t see. So when they get back to me and sit down, you have to make sure they’re comfortable, are breathing properly and then give them the advice. If it is all going to plan, assure them as they might think differently and tell them to go again. But, if it’s the other way around, that’s when you earn your money, because that is the most important minute in there. You have to always be honest in the corner and tell them how it is. As the trainer, you can’t just rely on one game plan, because if that collapses, you can’t adapt and the fighter loses his confidence. You have to be capable of having plan A,then plan B, and, if you have to, go to plan C.

‘IT’S YOUR CHANCE TO SLOW HIM DOWN’

Trains Andy Lee and others HOW you are in the corner can change drastically with every fight. When the fighter comes back to me, I always give him time, as it takes him 10 seconds to get back and sit down, make sure he’s comfortable, before relaying one or two instructions. This is your chance as a trainer to slow him down and keep him settled, while making sure he is receptive to the instructions that I am giving him. You have to be realistic in there to the fighter and tell them how you see the fight. If the fight is close going into the later rounds, tell them to be decisive, but remember the fundamental rule of ‘hit and not get hit yourself.’ Your fighter must have complete faith and the utmost respect for you, so if things aren’t going to plan, they trust you to tell them how to change it around in there. You should never have to convince your fighter to do anything, because they should believe everything you’re telling them. I never stand up in the corner, which goes back to when I was an amateur boxer. I hated the trainer standing over me, crowding me and giving me instructions.