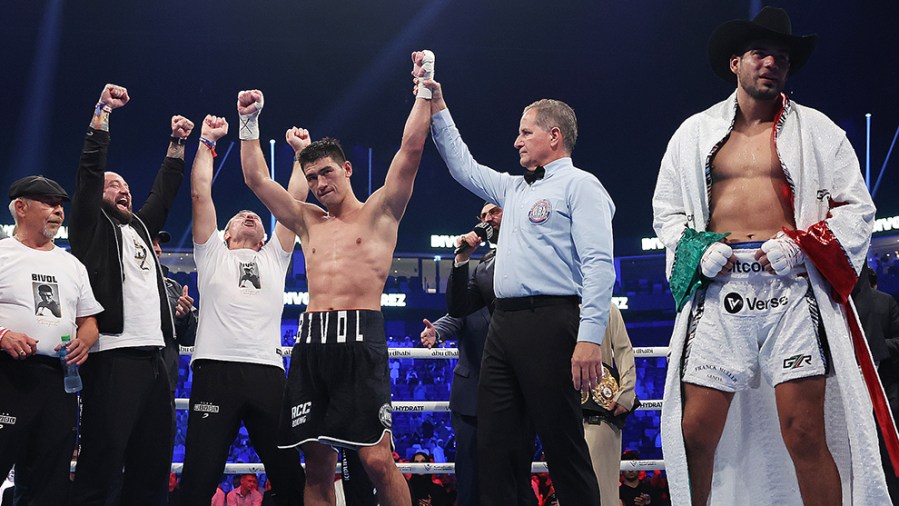 IF you watch boxing primarily because you want to see entertainment, drama, knockouts, and competitive two-way action, there’s every chance Dmitry Bivol won’t be the fighter for you. If, however, you are more interested in seeing the best judge of distance in the sport, as well as arguably the best footwork, and arguably the best ring control and discipline, Bivol could very well be exactly what you are looking for.

An acquired taste, someone who clearly isn’t for everyone, to watch Bivol requires a knowledge and appreciation of what it is you are watching. More than that, though, it requires an acceptance that perfection – which Bivol often comes close to achieving in the ring – will, by its very nature, starve you of drama and of the element of danger and competition you see in most fights lauded as “Fight of the Year” contenders.

With Bivol, you see, you are watching perfection in a boxing ring and have to, if that way inclined, learn to love it on that basis and that basis only. In other words, watching the Russian might not be the most thrilling spectacle in the world, but what it will be is an education, a lesson, a masterpiece.

Tonight (November 5) in Abu Dhabi, Bivol produced another one of those against Gilberto Ramírez, a former super-middleweight belt-holder who had, previous to this first professional loss, won five fights in a row at light-heavyweight, securing them all by stoppage. As good as that all looked on paper, Bivol was, for Ramirez, both a step up and, ultimately, a step too far; a fighter much too good. Never once, in fact, was Ramírez settled in the fight, much less in the ascendancy, and never once did the Ramírez who had finished 30 of his 44 prior wins inside the distance ever look remotely close to making so much as a dent in Bivol through the 12 rounds they shared.

For Bivol, despite the supposed threat in front of him, this was just another day at the office; not far off a sparring session or workout. In winning by scores of 118-110 and 117-111 (twice), he successfully disrobed Ramírez both mentally and then physically, stripping him down to his bare bones; a shell of the fighter some expected to at least give Bivol reason to worry.

As early as round one, in fact, the control Bivol likes to exert on opponents was evident again against Ramírez. From the outset he had taken hold of centre ring, as though its landlord, and in turn made Ramírez his tenant: insecure, anxious, never quite sure when the rent would be raised or he would be thrown out. This was achieved predominantly with just his feet, used expertly to manoeuvre Ramírez and position him in traps, but it was also achieved by a stiff right hand Bivol landed which immediately grabbed the Mexican’s attention and respect. (Speaking of which, there seemed very little respect between the two when, at the end of the first round, they bumped chests before walking to their respective corners.)

The first success for Ramírez, meanwhile, arrived in the second round, with a southpaw left hand snapping back Bivol’s head. Yet, despite that, there was still nothing he could do to build on it. He tried targeting Bivol’s body with his left, though often prodded rather than punched with any real conviction, and he appeared all too reticent given both his reputation for knockouts and his incredible physical stature.

By the third, Bivol, 21-0 (11), was back to being the more active of the two, peppering Ramírez with jabs and crosses whenever he made a mistake. He tended to wait for him, almost tempt him into making these mistakes with his mind, and then all of a sudden explode with a punch – essentially ten lashes – Ramírez would never see coming.

For three rounds, this seemed harmless enough, with Ramírez coping with whatever came his way. However, in the fourth, a Bivol right cross clearly buckled Ramírez’s legs and forced him back to the ropes, where he stayed momentarily before regaining his composure and returning to the centre of the ring.

That was a breakthrough of sorts for Bivol, a fighter without a stoppage win since 2018. It showed, albeit briefly, that he could sting Ramírez with one of his counter punches and it showed, too, that Ramírez’s mistakes would be punished not simply with a punch or two but by hurtful ones, the kind he had not been accustomed to facing in his career.

This knowledge only made Ramírez, 44-1 (30), more hesitant as the fight went on. He tried coming forward in the fifth but was rocked back by a Bivol combination, and only a right hook thrown at the end of that round offered a hint of Ramírez’s own potential in the fight. That aside, Bivol was in cruise control, growing in confidence, and cutting Ramírez down to size. Of the two, it was the Russian who looked like he had all the answers and it was Ramírez who looked like the one revising mid-test. Which is to say, there was seemingly nothing Ramírez could do that would surprise Bivol; nothing he hadn’t either expected or seen before.

Even the pace was ideal for Bivol. Not fast, but not exactly slow, either, the fight had by round seven become an exhibition, a boxing match in its purest sense. This allowed Bivol to dictate what happened and when it happened and also acted as a reminder to Ramírez and any other light-heavyweight out there that few will have any hope of besting Bivol in a traditional and clean boxing match.

Ramírez, for his part, tried. Of course he did. But his constant prodding of punches from the southpaw stance did little to deter Bivol and, what’s more, any time he got brave and opened up, he merely presented more holes in his defence for his opponent to exploit. This was evident in the seventh round and also the eighth when Bivol backed Ramírez to the ropes using only his footwork and then traded with him with a minute left in the round. A picture of comfort, Bivol got the better of things when on the front foot and also when later he found himself against the ropes, so one-dimensional and predictable were the attacks of his larger but slower adversary.

It was shortly after that, before the start of round nine, a DAZN commentator asked “Where is the Mexican style?” and I wondered if the beauty of Bivol is perhaps lost on even the people tasked with covering the sport today. He meant Ramírez, of course, when mentioning the “Mexican style”, but to assume it was as easy as simply choosing to fight in this way against a technician as sublime as Bivol showed a complete ignorance to the quality of fighter they were in that moment watching. Moreover, when later in the round, following a Bivol flurry, the same commentator then said “He’s giving us the Mexican style!” I wondered if boxing, in 2022, has merely become an exercise in reducing fighters to clichés and stereotypes in order to make the action – whether boring or exciting – more palatable for the kind of audience platforms like DAZN now have to target to keep their business afloat.

Regardless, Bivol won that ninth, Mexican style or not, and also swept the remaining rounds of the fight, leading to a unanimous decision victory at its conclusion. (I gave Ramírez just one round.) His performance tonight may be one easier to admire than enjoy, particularly if viewed through the eyes of those unaware of what it is they are seeing, but it was one hell of a performance all the same. Indeed, the 31-year-old Bivol has now produced not one but two of them this calendar year – this following his schooling of Saúl “Canelo” Álvarez in May – and it won’t be long before we all have to accept that calling Dmitry Bivol an acquired taste is not a backhanded compliment, nor something to hold against him. It is, instead, a reference to his perfection, therefore something that says more about us, the audience, than it does him, the artist.