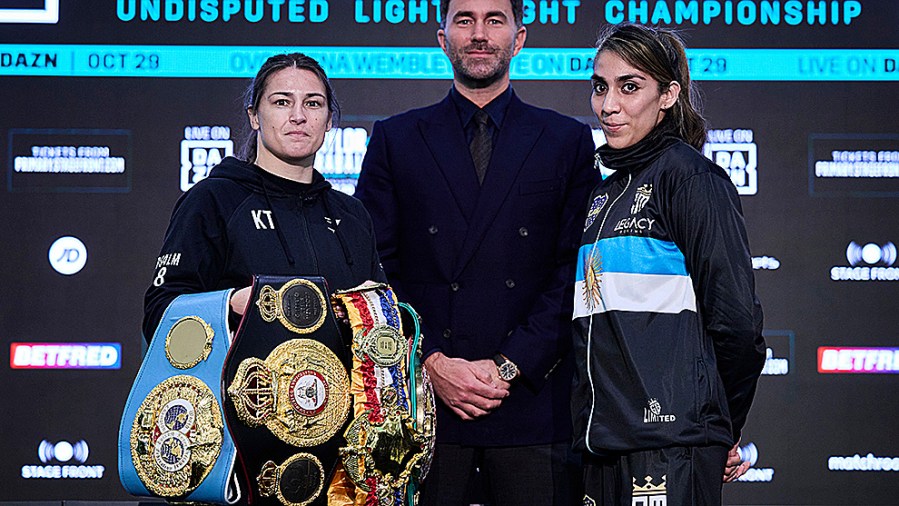 A FORTNIGHT after Claressa Shields, the self-proclaimed GWOAT, won her highly anticipated clash with Savannah Marshall, another woman with a claim to be history’s best takes centre stage once again.

Katie Taylor, a two-time Olympic gold medallist, a five-time world amateur champion and the undisputed No.1 at lightweight as a professional, is back in action for the first time since she beat Amanda Serrano at Madison Square Garden six months ago.

That night was seen as a watershed moment for the sport, with thousands packed into the iconic venue for the showdown between two of the pound-for-pound best, who had been circling each other for years.

Taylor, 21-0, got the nod that night after walking through Hell fire – and nearly getting stopped – by Serrano. It is a victory which will partly define her legacy when all is said and done. However, it does not look likely that this weekend’s showdown at Wembley Arena will do much more for it.

After their 10-round classic in New York, everyone had hoped for an immediate rematch between Taylor and Serrano but when that was not forthcoming, the pair had to make other plans. For Taylor, that means a challenge from Argentina’s Karen Elizabeth Carabajal, a 12/1 underdog.

The 32-year-old Buenos Aires resident arrives in London with a 19-0 record after nine years as a professional however she has spent her entire career at feather or super feather and has never once boxed outside of her native Argentina, nor has she ever faced anyone with more than 10 wins.

She has also managed just two stoppages in 19 and has boxed only once in the last 12 months – a six-round decision against 2-0-2 Lorena Agoutborde, a woman who is ranked by Boxrec as the fifth best female super-bantamweight in Argentina.

What all of this suggests is that Carabajal, aka Burbuja (the Bubble), will be absolutely no match for arguably history’s greatest fighting woman. And if she is, it means Taylor – a 1/25 favourite – is badly in decline.

Carabajal is a decent boxer and has long limbs which facilitate a stiff jab, but she can hold her hands low, which meant shipping plenty of overhand rights against Agoutborde last time out. She seems to take a decent shot but if she does the same against cross-hook-cross merchant Taylor, the bubble is going to burst.

That being said, Taylor has not won a fight inside the distance since she stopped Rose Volante in the ninth of their clash back in March 2019. But 10 rounds at this level against an established champion in Taylor is a long time. It would be a surprise if the Bray woman requires the judges.

Next month brings up six years since Taylor made her professional debut, which incidentally took place at the very same venue. That night Karina Szmalenberg was vanquished within three rounds as the Taylor Era of women’s professional boxing began in style. There is no doubt it signalled a turning tide for the sport and many of her peers have reaped the benefits. At 36, there are certainly big fights left for Taylor, sadly this does not feel like one of them.

This card was however bolstered by another female fight when Conor Benn’s adverse analytical finding forced the cancellation of his scheduled showdown with Chris Eubank Jnr earlier this month. Ellie Scotney was supposed to challenge Mary Romero for her European super bantamweight title that night but instead will do it here at Wembley.

The 37-year-old Spaniard Romero lost two of her first three as a pro but arrives in England as an 8-2 European champion. In three of her last four fights she has beaten previously undefeated opponents, including Southam’s Amy Timlin. But Scotney, of Catford, seems to be a different breed entirely and looks set for the very top of the sport. The 24-year-old from Catford is yet to earn a stoppage in her five victories so far and it is likely she will need all 10 rounds again here but should win comfortably on the cards.

The European title will also be on the line in the other of the night’s England v Spain contests; the intriguing featherweight clash between Jordan Gill and Kiko Martinez. Chatteris man Gill has not boxed since his stunning jaws-of-defeat KO of Karim Guerfi back in February while Martinez’s last outing was a stoppage loss to Josh Warrington in Leeds.

Elche-born Martinez is 36 now and has been a pro for more than 18 years. There is no doubt that he can still really punch (ask Kid Galahad) but Gill’s movement and skill could make this a frustrating evening for him. With eight KOs in 29 fights, it does not seem as though Gill carries the power to end this one early but a points decision seems likely.

Elsewhere on the bill, exciting Irish puncher Gary Cully will look to make a statement in his first fight since signing for Matchroom. The Naas lightweight, 26, stopped Miguel Vazquez in the fifth round of their clash in Nottingham in March on the undercard of Matchroom’s Leigh Wood v Michael Conlan show. His reward for an exciting display was a long-term promotional deal with Eddie Hearn’s firm.

“I’ve always said that with the right backing I believe I can reach the very top of this sport and be a huge name in boxing,” he said. “I’ve got big dreams in boxing; I want to be involved in the biggest fights with the biggest names. I want the likes of Gervonta Davis, Ryan Garcia and Devin Haney.”

But before any of that, his first assignment comes in the form of France’s Bombardier Marocain Jaouad Belmehdi. The visitor is only 24 and is undefeated but has drawn three of his 19 fights, in fact he was 7-0-3 after 10. That record suggests a potentially frustrating night for Cully but with three consecutive stoppages, he should get the job done here down the stretch.

Another man who looks odds-on for an early night is heavyweight ticket-seller Johnny Fisher. The popular Essex puncher, who is trained by Mark Tibbs, is well known for his legion of travelling fans, known as the ‘Bosh Army’. That little mob, however, probably won’t see their man in action for very long on Saturday. Fisher’s opponent is Dominik Musil who was last seen on these shores getting stopped by David Adeleye in four.

Fisher has stopped five of his six opponents inside three rounds, with the other making it through the six-round distance. The chances are that Musil will join that longer list of early exits.

There is also a fight for the Central Area light-heavyweight title on the bill with current belt holder Mickey Ellison defending against Liverpool’s undefeated Thomas Whittaker Hart. Also at 175lbs, undefeated southpaw John Hedges is back in action over six rounds while ‘The Wanderer’ Jordan Reynolds will look to go 4-0 when he boxes for the first time in exactly a year.

THE VERDICT: Katie Taylor the big favourite in a one-horse race.