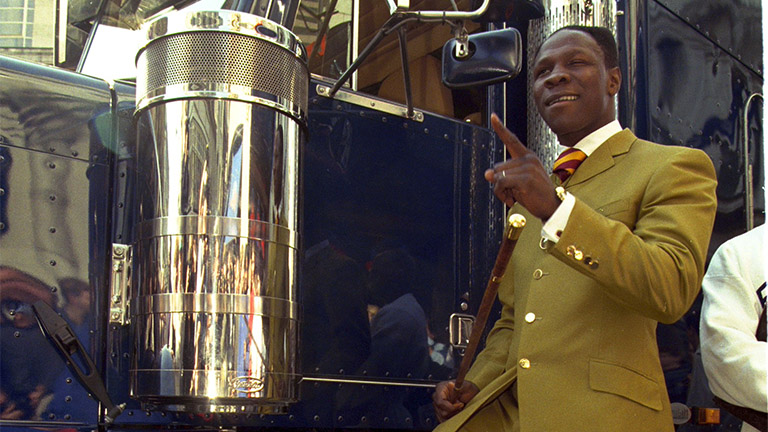 LOVE him or hate him, Tyson Fury is currently riding a wave of popularity driven as much by force of personality as by his in ring exploits, writes Martin Potter. Past controversial comments on religion and sexuality, a PED ban and cocaine use, mixed with an inspirational comeback from depression and extreme weight gain, turning up at press conferences dressed as Batman, post fight singing and now a wrestling appearance have made Fury a hero for some and a hate figure for others. But whether you accept Tyson Fury’s lineal title claim or not, what can’t be denied is his claim to currently be the biggest character in British boxing. Here I take a look at some of the other huge characters in recent British boxing history:

‘Big’ Frank is arguably the most beloved and well known boxer in the history of British boxing. Unlike some of the other fighters on this list, Frank was never a polarising personality; he was – and still is – loved throughout the UK.

Whilst a destructive puncher inside the ring, Frank was always a gentle giant outside of it. His booming laugh, funny catch phrases and his endearing relationship with commentator Harry Carpenter, leading to the oft impersonated line: ‘Know what I mean ‘Arry,’ meant that Bruno was taken to the nation’s heart. Appearances in panto and on chat shows, where Frank continued to display his jovial nature, cemented British sports fans love affair with him.

The fact that Frank lost in his first three world title attempts perhaps bizarrely helped his popularity soar further. Whilst an American athlete would be derided, Britain loves an underdog or, if the term isn’t too harsh, ‘lovable loser’. Thankfully the nation rejoiced when Frank discarded that tag and finally took a world title at the fourth attempt. The title reign was short lived, with ultimate baddie ‘Iron’ Mike Tyson wiping Frank out in a few short rounds in his first defence. But it didn’t matter – Frank Bruno had already achieved what everyone wanted for him.

Battles with mental health issues have plagued Frank since retirement, but he has fought against his problems resolutely. Frank Bruno is a true champion in and out of the ring.

Christopher Livingstone Eubank was perhaps the first British fighter who took on a love/hate persona and really pushed it to the max. Dressing like an English dandy, complete with cane and monocle, was an irritant to some, but what really got the backs up of the entire boxing establishment were his comments that ‘boxing is a mug’s game’.

Yet while at first most wanted to see Eubank lose, his popularity was still huge and his warrior-like nature inside the ropes, alongside the eccentricities outside the ring, meant that he gradually started to win fans round. Also going in Eubank’s favour was the fact that he was a real showman who made his fights an event. Turning up on Harleys or in American trucks (but still in full English gent garb) to pressers and electric ring entrances, complete with Tina Turner’s ‘Simply the Best’ song (also Eubank’s nickname, naturally) and a trademark hop over the top rope, meant that audiences were guaranteed a show. Which was lucky as some of Eubank’s actual fights were awful!

That Eubank’s personality was such a contrast to that of his big rival, the brooding and destructive Nigel Benn, meant that he – and the pairing of them – was a marketing man’s dream. And Chris did not hesitate to dial up the eccentric aspects of his character in order to get under Benn’s skin.

Now in retirement and after brave defeats towards the end of his fighting days, Chris Eubank Snr is thought of far more fondly than many would have dared to imagine, with appearances on TV show Gogglebox alongside boxing son, Chris Jnr, more endearing than cringeworthy. But he is still crazy!

Prince Naseem Hamed was the little man with the huge punch. And an even bigger mouth.

Starting his professional career whilst Eubank was in the midst of his, Naz took many of the things that Chris had done and did them bigger and brasher.

Whereas Eubank came out posing to music and flashing lights, Naz added props and pyrotechnics to the mix, with some of his most elaborate entrances being on a flying carpet, on a trapeze and walking through a graveyard prior to a Halloween bout with Wayne McCulloch, with the headstones supposed to represent his past opponents. Tasteful it wasn’t.

Whilst Eubank vaulted the top rope to enter the ring, Naz did a full flip over the ropes and he would later claim it was Eubank who stole his gimmick, and not the other way round. Their feud, now settled, even resulted in an airport scuffle despite the big size difference.

The Prince’s trash talk about his opponents and members of the press also took on a more crass and distasteful tone than anything Eubank ever did. He would boast, he would brag, but there was never really a glint in his eye – you sensed he really meant most of it.

Like with Eubank, many tuned in to see Naz lose but, perhaps unlike with Eubank, it never seemed likely to happen. Prince Naseem Hamed was dynamite in the ring. At his best his opponents could not lay a glove on him; he would frustrate them with his movement and disrespectful antics before knocking them out with one punch power often delivered from impossible angles. Naz was compulsive viewing, even if you hated his character.

Whilst millions loved watching The Prince for his outlandish behaviour and incredible ability, he was never really able to get the general public to actually like him. Which is a shame as, in my opinion, Prince Naseem Hamed is the most naturally talented boxer on this list, and probably the best British fighter (talent wise) I have seen in my lifetime.

Despite all the titles and money, Naz’s in ring career ended in disappointment with a loss to Mexican great Marco Antonio Barrera in what would have been a career defining fight. One awful comeback win later and The Prince was done. After a spell in prison for a motor vehicle offence, Naz can now be seen occasionally on our screens as a pundit, and he is hard to miss given the huge amount of weight he has put on. The diminutive stature may have gone but the pointed tongue remains as, just like his in ring prime, Naz does not pull any punches.

The Hitman, from Hyde, Manchester, is much more of a Bruno than a Eubank or Hamed. His popularity was not built on controversy but instead on his working man/football supporter appeal.

Along with Joe Calzaghe, Hatton represented the new wave of British boxing talent as the stars of Lewis, Hamed, Bruno, Eubank and Benn began to fade. But whilst Calzaghe would prove the superior fighter (no mean feat, given Hatton’s success), it was Hatton who really exploded into the consciousness of British boxing fans. This was particularly impressive given that Hatton was one of the first fighters to do it solely on a paid for TV platform.

Although Ricky Hatton started with a small hardcore base of supporters from his home team, Manchester City, who loved the fact Hatton wore club colours and walked to the ring to Blue Moon, he soon had united (for want of a better word) football and boxing fans across Manchester. His no holds barred style in the ring, often complete with blood from the paper thin skin tissue around his eyes, coupled with post fight jokes, s*** shirt contests and pints, plus a pre fight gut buster fry up, meant fights fans, and sports fans, across the country loved Hatton.

Hatton repaid the love and support of his fanbase with a glorious underdog victory against feared puncher Kostya Tszyu in Manchester, making him the number one light-welterweight in the world. More titles followed before Hatton stepped in with P4P number one Floyd Mayweather Jnr in a Vegas super-fight between two unbeaten champions. Whilst the fight itself proved a step too far for Hatton, it did cement him as the most popular fighter in Britain as his army of thousands of British fans took over the Las Vegas strip on fight week and drank it dry. Many hotels and bars said they had never seen anything like it; some statement indeed given all the fights and events that Sin City has seen over the years.

Like many with an externally jovial nature, Ricky Hatton struggled with internal personal demons. The Mayweather loss haunted him and despite some comeback wins he never looked the same again. Another loss to another P4P great, Manny Pacquiao, effectively ended his in ring career (as a Hatton fan, it’s hard to count the comeback defeat a few years later).

In retirement Hatton has been up and down, battling depression, family rifts and a rocky relationship with the booze. The much loved hitman now finally seems to have found some peace as a boxing trainer but if you’re ever in Benidorm and see Ricky, he is sure to share a pint with you!

The last fighter on this list and the least accomplished in terms of boxing achievements, ‘Del Boy’ beats them all when it comes to unpredictable behaviour. If Bruno and Hatton were naturally likeable and Eubank and Naz’s acts were slightly calculated and predictable after a while, Chisora is the wild card.

As a fighter, Chisora is as predictable as his personality. He can look fantastic, give his all and display both courage and knock out power. Alternatively, he can look awful, slow, overweight and disinterested. You never really know which Chisora will show up.

Pre fight, during the fight and post fight, the London heavyweight has done a number of weird and not so wonderful things. He has kissed opponents (full on the lips), bitten opponents, spat at opponents, thrown tables, threatened to shoot and burn people and, perhaps most bizarrely, repeatedly called Dillian Whyte ‘The Donkey’.  There can’t have been many fighters who have had as many pre or post fight scuffles (or near scuffles) as Chisora. Most recently Chisora took over a press conference and demanded he should be top of the bill, despite the top of the bill fight being the final of the World Series of Boxing between two unbeaten world champions (something Chisora has never been).

For all the outlandishness, for all the bad behaviour, there is still something strangely likeable about ‘Del Boy’. And that means he doesn’t have to wait until next year to become a millionaire…