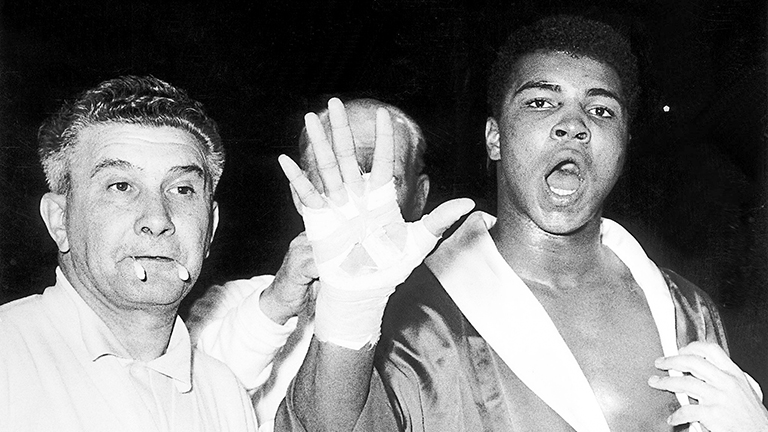 1. ARCHIE MOORE (w rsf 4)
“The Old Mongoose” was certainly past his best when he was beaten, but the manner in which young Cassius Clay went about the thrashing was awe-inspiring. Moore could not cope with the brilliance, in what is undoubtedly Clay’s finest pre-Liston performance.

2. HENRY COOPER (w rsf 5)
The heavy knockdown Clay suffered shaped the story of the famous fight but how he recovered from such potential devastation offered an early clue to the incredible recuperative powers he possessed.

3. LAMAR CLARK (w ko 2)
Clark boasted a record of 43-2 before Clay took him out in two rounds in just his sixth outing. It marked the first time that the poet made, and lived up to, one of his famous pre-fight predictions.

5. DOUG JONES (w pts 10)
The decision may have been controversial but Clay’s will to win, while fighting a difficult opponent in his backyard, is not up for debate.

1. SONNY LISTON (w rtd 6).
Clay was almost faultless on the night of his first coronation; he made the formidable Liston look ordinary. Sadly for Sonny, he is still remembered first as the man who was twice thrashed by Clay, and the excellent fighter he was second.

2. CLEVELAND WILLIAMS (w rsf 3)
Perhaps the most thrilling one-sided win of all time, Ali was virtually unstoppable at this time. Had Williams have been closer to his peak, it’s likely that this would be regarded as the champion’s finest performance… READ MORE

3. GEORGE CHUVALO (w pts 15)
The Canadian was the hardest man of his era, a superb puncher and underrated boxer. Ali kept him at bay for the majority of 15 tough rounds, displaying that he had the stamina and toughness to go with his flash.

4. ZORA FOLLEY (w ko 7)
Ali was perhaps guilty of coasting through a few of the early rounds but once he developed a taste for the job, Folley had no chance at all.

5. FLOYD PATTERSON (w rsf 12)
Patterson was the first man to get the ‘What’s my name?’ treatment from the champion. It was spiteful but a solid indication of his brilliance that he executed his revenge so ruthlessly… READ MORE

1. GEORGE FOREMAN (w ko 8)
Ali’s strength of mind was the biggest factor in victory in Zaire. The defeat hurt Foreman for years, and it was only recently he stopped making excuses and admitted Ali was the better man… READ MORE

2. JOE FRAZIER (w pts 12)
The least thrilling segment of the Ali-Frazier trilogy but another one to be found among Ali’s Greatest Hits. He showed he had learned more about Frazier from their first fight than he had learned about him.

3. JERRY QUARRY (w rtd 3)
Considering Ali had been out of the ring for three years, and Quarry was one of the toughest heavyweights who ever lived, this was some performance. His timing was superb, and his conditioning faultless… READ MORE

4. KEN NORTON II (w pts 12)
Norton was all wrong for Ali and gave him three difficult nights. Ali’s clearest success came during the first half of their 1973 rematch.

5. JOE FRAZIER (l pts 15)
Ali was beaten on points, but there were few losers at the Fight of the Century. The fact he got up from a hellacious left hook in the last round was bordering on the absurd.

1. JOE FRAZIER III (w rtd 14)
“It was the closest I ever felt to death,” Ali said after this most gruelling of battles. This was the bout that ruined them both such was the extreme violence involved… READ MORE

2. LEON SPINKS (w pts 15)
Ali renewed his legend when he claimed the heavyweight title for the third time. A largely underrated performance due to Spinks’ career going into freefall after this bout… READ MORE

3. EARNIE SHAVERS (w pts 15)
Ali stood up to the punches of Liston, Foreman, Lyle, Chuvalo and Shavers without being knocked down. His durability, and ability to recover were astonishing… READ MORE

4. RON LYLE (wrsf 11)
By now in a steady decline, the champion was again forced to swallow heavy bombs before dishing out his own. The ‘Rope-A-Dope’ was in full swing.

5. RICHARD DUNN (w rsf 5)
Not vintage Ali, nor a vintage opponent, but this was the last time that The Greatest would win inside the distance.