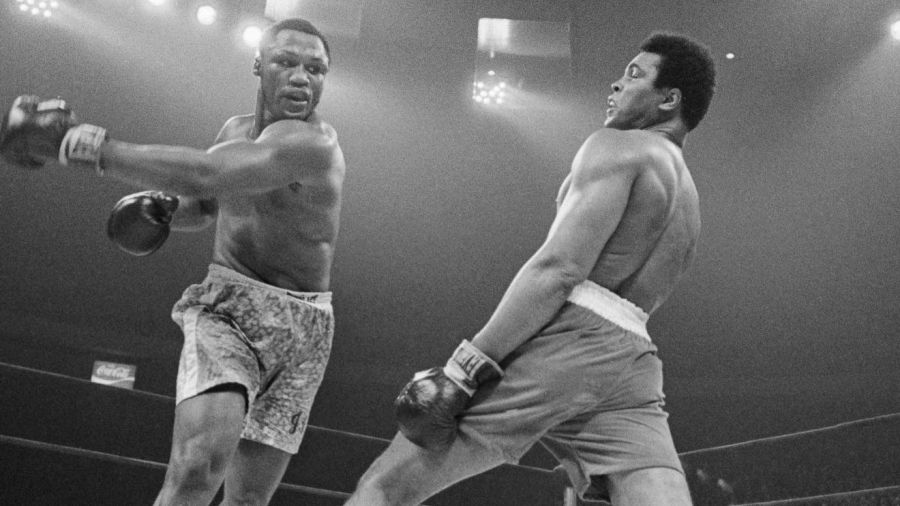 The premise for Desert Island Fights is simple: You will soon be stranded on a desert island. To ease the boredom, you can take along one – and only one – fight from each of the last five decades (1970s, 1980s, 1990s, 2000s and 2010s) to watch while you’re there. Which five fights do you take?

I put the question out on social media – Twitter, Instagram and Facebook – and received a great response. Here I will examine your choices from the 1970s, collate the Top 5 and overall winner for the decade (governed by the number of votes they received).

The 1970s will always be remembered as the decade when the heavyweights were on top of their game. A time when Muhammad Ali, Joe Frazier, George Foreman, Ken Norton and Larry Holmes battled for the top spot via a series of thunderous wars.

Though there were other fights from other divisions mentioned, it’s no surprise that the land of the giants dominated the voting…

ARGUABLY the most famous contest in boxing history, ‘The Rumble In The Jungle’ certainly stands the test of time. The fight’s narrative has warped over the years, though, with many now preferring to ignore the fact that Ali was in command for most of the bout, even if he was doing most of the fighting with his back to the ropes. Foreman, who afterwards made excuse on top of excuse, simply had no answer to the brilliance of Ali and exhausted his body and mind trying to make a significant breakthrough.

WATCH OUT FOR:
As Ali patiently shadowboxes in the ring while he waits and waits for Big George to make his entrance, the voice of Angelo Dundee – Ali’s trainer, getting increasingly irate at the amount of time it’s taking the champion to leave his dressing room – can be heard over the commentators: “Foreman’s jerking us off as usual,” Dundee says.

DID YOU KNOW:
Godfrey Amarteifio of Ghana, an official of the African Boxing Federation, said beforehand that the fight could be won and lost on a foul. Among the fouls he made clear would not be tolerated was “insulting language”, thought at the time to be a warning to Ali to keep his mouth shut during the fight.

A BRUTAL affair that, in effect, triggered 10 years of multiple champions atop the division thanks to the WBC stripping Leon Spinks (who had beaten Ali) and handing their belt to Ken Norton. The new titlist is unfortunate that he came up against Holmes in his first defence, thus making Norton the only heavyweight champion to never win a championship fight. His efforts here would have beaten almost anyone else at this time, though. The bout swings both ways before the violent and mesmerising 15th, which was edged by Holmes.

WATCH OUT FOR:
The level of skill on display. At the end of the 14th, Norton – with his cross-arm defence – bats away Holmes’ left with his right glove before mounting his own attacks on the inside. Holmes, in turn, glides backwards to create the extra space to get more leverage on his punches. Pure quality.

DID YOU KNOW:
Norton, when asked before the fight about how he felt about being awarded the title, said: “I need an impressive win otherwise it will make [WBC president] Jose Sulaiman look bad, me look bad and boxing look bad. Because if I don’t win, people will say it never should have happened.”

EASY to get too attached to the rose-tinted glasses when looking back through history but, sometimes, it’s impossible not to come to the conclusion that they don’t make them like they used to. After a long layoff (15 months) following that beyond humbling loss to Ali, Foreman embarked on his comeback against Ron Lyle. Talk about not coming back soft. Lyle himself had lost to Ali but was fresh off a thrilling KO of Earnie Shavers. The war that followed would be an ideal viewing companion on any desert island as both men were badly hurt, floored (and flawed) before Foreman ended the contest in the fifth.

WATCH OUT FOR:
Hard to pinpoint one moment in particular but the commentary from Howard Cosell is a joy as the action really heats up in the fourth round.

DID YOU KNOW:
Lyle was furious after being stopped by Ali in a 1975 bid for the world heavyweight title. The referee in that bout was Ferd Hernandez, who appeared to obey Ali when the champ urged him to stop the fight. Heading into the bout with Foreman, Lyle said he would not fight if Hernandez was installed as the man in the middle. Charley Roth would referee.

THE fight attracting more votes than the previous three fights put together – but still some way short of the top spot – was the epic Ali-Joe Frazier rubber match from 1975. Anyone reading this will likely know the story of this fight inside out but that doesn’t stop it from being mesmerising, irrespective of how many times you’ve seen it before. The enemies’ desire to win, the courage, the mind-boggling ability to take punches and keep coming, still astonishes, 45 years later. In the end, after what many have described as the most gruelling encounter in history, a blind but still willing Frazier had to be kept on his stool by Eddie Futch.

WATCH OUT FOR:
Before entering into the most hellish contest of his entire career, Ali is all smiles as he bounds to ring centre to confiscate the huge trophy that had been specially made for the winner. His demeanour was a sharp contrast when it was really time to celebrate an hour later.

DID YOU KNOW:
Eight hours after the fight, Ali – swollen, bruised and limping – went to a reception dinner arranged by President Ferdinand Marcus. In the visitor’s book he wrote: ‘Death is so near and time for friendly action is so limited. Love and Peace always.

LEADING the way by some distance as the choice for the Seventies’ Desert Island Fight is the first contest between Frazier and Ali. Easier on the eye than their savage third encounter and more exciting than the rematch, this contest – between two brilliant and unbeaten heavyweights who had captured the entire world’s imagination – set a bar so high that no subsequent superfight has been able to match the anticipation this generated. Ali was magnificent at times but this fight must always be remembered as Frazier at his very best – and on this night, he was close to unbeatable.

WATCH OUT FOR:
Ali’s ability to take a shot is legendary and with good reason. How he survived the 11th round, only he knew. Frazier’s supreme left hook – a thing of fistic beauty – hurt him badly several times. That he got up after taking it flush in the 15th round, while surely exhausted, remains one of the most stunning moments in the sport’s rich past.

DID YOU KNOW:
Ahead of the New York bout, Frazier was the 7/5 favourite in Las Vegas betting shops while in London, Ali – in a nod to his worldwide appeal – was fancied at 11/8. Familiar talk of a ‘fix’ gathered pace before the fight when it was revealed that a site had already been agreed for the rematch (The Forum in Inglewood, California). However, their 1974 return would again take place inside Madison Square Garden.

1) MUHAMMAD ALI w ko 8 GEORGE FOREMAN
For me, this was Ali at his greatest and a fight I can happily watch over and over. I still get goosebumps when he bursts off the ropes in the eighth and applies the finishing blows. I couldn’t find any room for the ‘Thrilla in Manilla’ among my choices; though Ali-Frazier III was a great fight, I find the sheer brutality hard to watch, particularly knowing the ill-health they both went on to endure.

THE HIPSTERS’ CHOICE
You know the type. They know more about boxing than you…
MASAO OHBA w ko 12 CHARTCHAI CHIONOI
In a terrific scrap for the WBA flyweight title, Ohba is in desperate trouble in the opening round as he swallows several overhand right hands and ends up on the canvas before barely beating the count. Dazed and nursing a leg injury, Ohba gallantly battles back to drop Chinoi three times in the 12th and retain his championship.