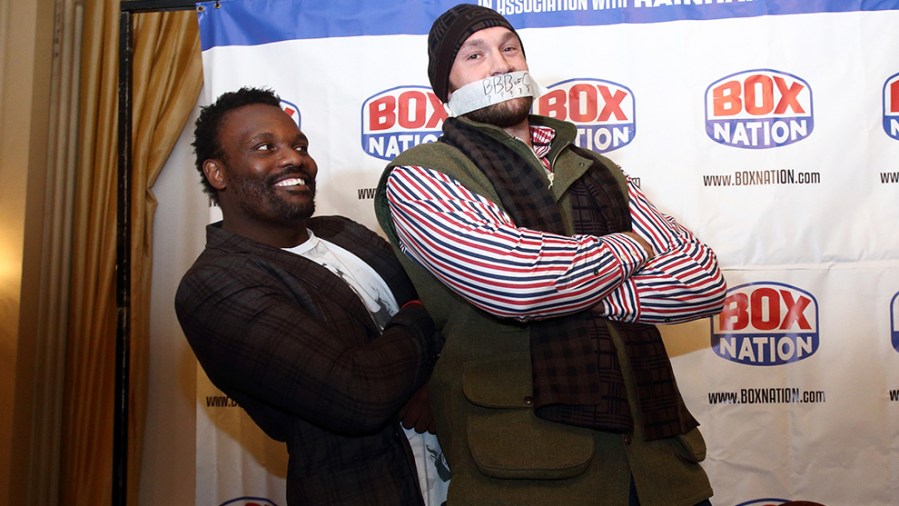 It's the trilogy fight nobody wants or needs to see, yet Fury vs. Chisora III could soon become a reality, writes Elliot Worsell

AS promised, Tyson Fury will this year donate a portion of his money to charity, only the charity’s name happens to be Derek Chisora.

That has been the rumour doing the rounds this week, though admittedly, as with anything Fury says, whether related to donations or not, we must wait for an official announcement before it can be believed.

Indeed, so hard is it to imagine this fight as a reality, an announcement in this case really is necessary. Until then, we can at least deny it is happening. Until then, we can remind ourselves of Fury’s propensity to tell jokes and lead us on and convince ourselves this is merely another joke in a year full of them.

That’s not to blame Chisora, mind you. All he has done, in this instance, is say “yes” and then presumably “thank you”. Moreover, he recently stopped a three-fight losing streak by beating Kubrat Pulev in July, which, to his credit, at least shows he has something left in a tank clearly ticking on empty.

Nevertheless, the prospect of Chisora, 33-12 (23), now fighting for a world heavyweight title is, quite frankly, ludicrous and is made all the more ludicrous by virtue of the opponent: a man against whom Chisora has already twice come up short.

Even that, to say he came up short, is probably giving a third fight more weight than it deserves. Because the truth is that Chisora didn’t just come up short on both those nights against Fury. He was in fact soundly beaten, particularly when they met for a second time in 2014, the night Fury played with Chisora like the truth before Chisora retired on his stool after 10 rounds.

The feeling back then, some eight years ago now, was that Fury was a vastly improved fighter – signified by the ease with which he beat Chisora second time around – and that Chisora, a heavyweight who always fights hard, had probably seen better days.

Little did we know, however, what was to then follow, with Fury set to dethrone Wladimir Klitschko before throwing it all away and recapturing it, and Chisora doggedly carrying on – winning some, losing some – before, around 2018, emerging as an unlikely pay-per-view star.

Still, to say they are both better now than they were in 2014 would be a lie. Fury, 32-0-1 (23), is certainly better, yet the same cannot be said for Chisora, now 38. What, though, can be said, if desperate for answers, is that both of them are clearly more famous and popular now than they were back in 2014 – and we all know what that means.

What that means is this: everything. It means that regardless of how they are both performing in competition terms, and regardless of the disparity between them (which has only grown over the years), an increase in popularity teases the possibility of a pay-per-view fight. It means Fury, the name, and Chisora, the name, can still work on a poster (or these days a Twitter banner) and can still be fed to fans too young to remember the last time they boxed, much less the first time they boxed.

To these fans, the ones targeted by this kind of fight, Chisora is just that funny, angry bloke who flips over tables, swears a lot, demands money from Eddie Hearn, and loses plenty but tries really hard. He promises “War” every time and these fans believe him, for they know not what “War” really means, especially in the sense Marvin Hagler meant it when first bringing it to the public’s attention in the eighties.

For these fans, or “casuals”, a fight like Fury vs. Chisora III might appeal. It will be sold, after all, solely on their personalities, and few are bigger than Fury and Chisora. It will also be sold, somewhat audaciously, on the basis that it is a trilogy fight – which, in itself, implies significance – and therefore carries the ever-alluring prospect of revenge. Even Fury, the director of this shoddy and cynical remake, has expressed pride at being the first heavyweight champion in history to have engaged in two trilogies (this following the far more meaningful one he had with Deontay Wilder).

Yet, as heavyweight trilogies go, Fury vs. Chisora is to Bowe vs. Holyfield what PJ and Duncan are to Simon and Garfunkel. Or, in other words, just because the numbers are the same does not mean the quality is the same. Nor does it mean they should have ever combined and reached that magic number together in the first place.

Because as much as we try to pretend that boxing is more a sport than a business, when fights like this are made, or even so much as mooted, it becomes increasingly difficult to fight its corner. Events like this, ones involving two men who are essentially friends at this point, are merely business transactions masquerading as sport. They are all in on it, from the top to the bottom. It is a deal sealed with a handshake and a wink, with an order of Five Guys ready for afterwards.

Eventually, two foil-wrapped burgers will be eaten and will, for all they have produced in the ring, no doubt be well-earned. Yet make no mistake, it is not Fury or Chisora paying for them. Instead, the ones paying for their ground beef are those stupid enough to watch. The ones truly charitable.