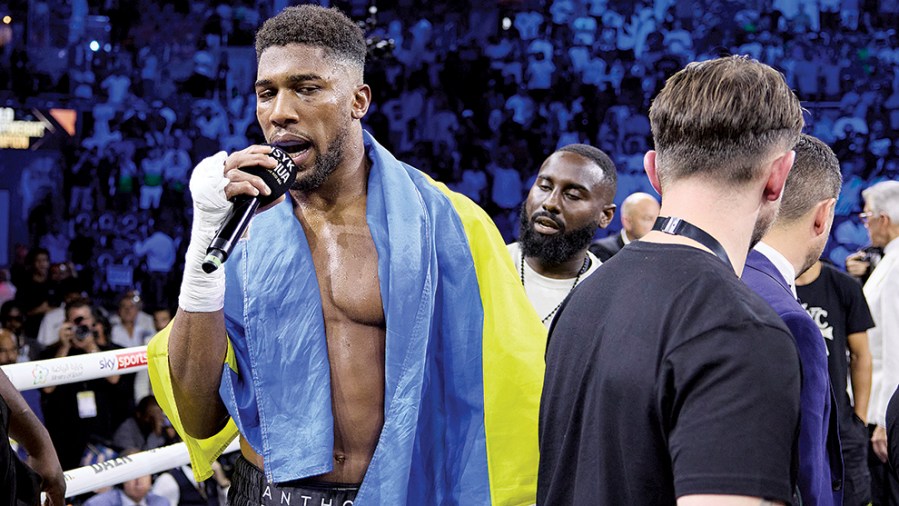 Is Anthony Joshua staying "hungry and humble", or is he about to turn heel? asks Elliot Worsell

FOR years Anthony Joshua would smile that winning smile of his and tell all who would listen that the key to life was staying both hungry and humble. He would, in the hope of raking in additional money, even plaster this mantra on hats and on T-shirts, as well as various other items worn by both members of his swollen entourage and fans who paid to watch him fight, either on television or in arenas and football stadiums up and down the country.

“Stay hungry. Stay humble.” Admittedly, it was hardly the deepest sentiment in the world, nor did it shed any new light on what it requires to be a successful professional athlete. Yet that was neither here nor there. For Joshua, someone whose beauty lies in his ability to connect with the masses in very basic and easily digestible terms, it was a politician’s campaign slogan; one The People believed in even if he, the one preaching it, didn’t necessarily believe in it himself.

Of course, only Anthony Joshua will know the extent to which he has (a) stayed hungry since turning pro in 2013 and (b) stayed humble in spite of fame and an ever-expanding and ever-agreeable entourage. Certainly, though, if before he was merely keeping up appearances, the true test of the displaced heavyweight champion’s hunger and humility will arrive now, in the wake of Joshua suffering back-to-back defeats and having not experienced the winning feeling in over two years.

With that in mind, one suspects winning will be the main aim when the Londoner returns to the ring this April. It’s perhaps for that reason a mooted fight with Tyson Fury last December was only ever paper talk and why even a mooted second fight with Dillian Whyte, someone beatable but still dangerous enough to cause an issue, is also considered more likely for the middle of this year rather than the beginning. In short, Joshua, 24-3 (22), needs to get going again and he needs to win. Not only that, such was the damage inflicted by his last two defeats, psychologically speaking, there is a sense with Joshua now that you don’t know quite what to expect, or indeed how much drive he has left.

Because clearly, if we recall the events of Saudi Arabia in August, we are dealing with a man in the middle of some kind of identity crisis, if not – on that night in particular – a complete breakdown of sorts. Which is to say, it was not the performance he produced against Oleksandr Usyk that caused any real concern, but instead it was the aftermath of said performance. For it was during that, the aftermath, Joshua was seen letting his guard down to a worrying degree; embarking on a rant of epic proportions, the like of which nobody had ever before seen or heard from a largely vanilla and pre-programmed figure. Gone in an instant that night was the façade, the illusion, and the mask his enablers had crafted for his own good since turning pro a decade ago. Gone, too, was any stoicism, or the chance to carry on as he was before. 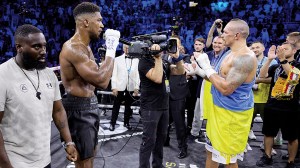 That Joshua can no longer do, unfortunately. Now, thanks to his outburst in Jeddah, we have seen for ourselves the “real” Joshua, meaning that for him to return to the wind-up toy of years gone by would seem a move even more cynical than it seemed when the intention was commercial opportunities and sponsorship deals. Now, because of his pain and his transparency and – let’s be honest – no small amount of concussion, Anthony Joshua is out of the cage, unleashed, unruly and perhaps even interesting.

It’s true. For as twisted as it sounds, as far as interviews go, no interview Anthony Joshua has ever given was as fascinating and revealing as the piece to camera he delivered in Jeddah five months ago. That night, whether rightly or wrongly, he was a man openly hurting and therefore a man painfully honest, and this honesty was for once facilitated by the cowardice of those around him; men happy to suck from the cash cow’s tit when the going’s good but who turn a blind eye to the bloodshed when a mad man with a shotgun has invaded the farm. Left all alone, marooned in the Middle East, Joshua ended up a man stripped bare, consoled only by the pitying looks of compassionate Ukrainians, including Oleksandr Usyk, who shimmied away from the Brit as though he were a volatile drinker in an overcrowded pub.

“F**k being humble,” Joshua had said in an interview ahead of that Usyk rematch and maybe now, on reflection, that was the first sign of the mask starting to slip. Maybe, at 33, he was becoming tired of playing the CBeebies Champion of the World while fellow heavyweights, like Tyson Fury, were seemingly able to get away with the sporting equivalent of murder – both verbally and in terms of his performance-enhancing drug history – and still be embraced by the British public as some sort of saintly inspirational figure. Maybe for Joshua the identity crisis started long before Oleksandr Usyk humbled him in the purest sense of the word for 36 minutes in Saudi Arabia.

“Good is dull,” wrote Iris Murdoch in her 1970 novel A Fairly Honourable Defeat. “What novelist ever succeeded in making a good man interesting? It is characteristic of this planet that the path of virtue is so unutterably depressing that it can be guaranteed to break the spirit and quench the vision of anybody who consistently attempts to tread it. Evil, on the contrary, is exciting and fascinating and alive. It is also very much more mysterious than good. Good can be seen through. Evil is opaque.”

In the end, whether experiencing an identity crisis or not, what Anthony Joshua will likely come to realise is that humility and hunger are not just words you print on hats, T-shirts, tea towels and fridge magnets, nor merely buzzwords to run across the top of PowerPoint presentations destined for a boardroom somewhere. They are instead two things key to his return, both to form and to his old self; if, that is, it isn’t from his old self he is ultimately trying to escape.