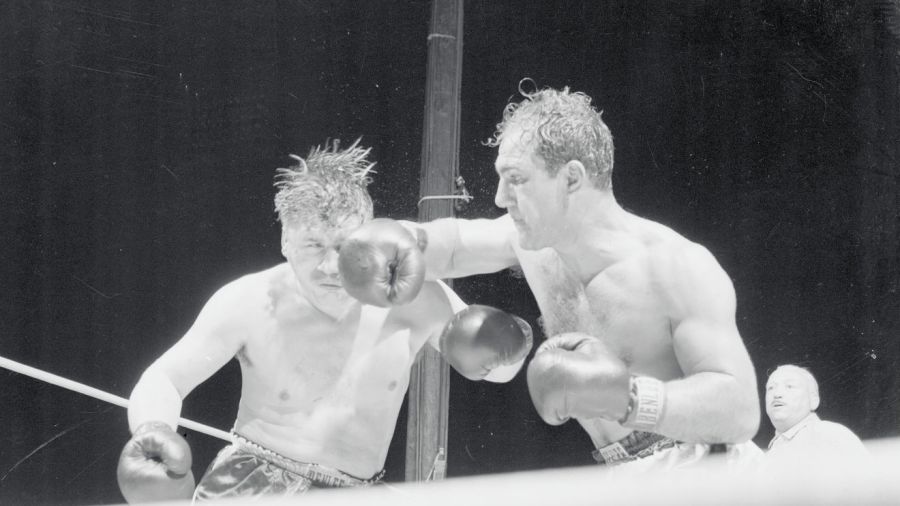 There is meant to be a barrier separating boxers from killers, writes Steve Bunce as he looks back on Rocky Marciano's fight with Britain's Don Cockell

DON COCKELL was never the same after losing to Rocky Marciano one night in the twilight of a Californian day in May 1955. Marciano had help that night, aided in his legal assault by the California Boxing Commission’s comic rule book and that tin-pot bureau’s interpretation of boxing’s necessary shackles. There is meant to be a barrier separating boxers from killers. The fight took place after an equally savage butchering by the American press in the days before the first bell. Hopefully the men and women in Cockell’s touring party at their ridiculously-named retreat, the Bermuda Palms Hotel in San Rafael, managed to hide the papers each morning to spare Cockell’s blushes.

The boss scribes of the American boxing press called him “Fats”, which was mildly respectful compared to their other descriptions: the “tubby target”, “a light-hitting plodder”, “dogged tub of fat” and the “resolute fat man”. Cockell was given no chance and he had no chance, but that is not the story of the fight.

Before the fight at the Kezar Stadium in San Francisco, then the home of the 49ers, a notorious but unnamed man visited Marciano in the changing room and unsettled the champion. “He told me that Cockell would be easy, too easy,” remembered Marciano. “I wish he had never come in the room and I wish I had never heard of him [Cockell].” Marciano decided then to be relentlessly vicious.

“I knew he could fight, he looked like a tub, but he had a mean look. He had beaten good fighters, I knew that, but that guy got me thinking – I just had to get the job done,” added Marciano.

There were a lot of boxing mob faces at the prelim acts, gathered in smoke-filled rooms during the week of the fight, and the great Peter Wilson, the Daily Mirror’s hard-drinking icon, wrote “the tough guys with banana noses and ears like walnuts” were at ringside.

The ring, incidentally, was described by Cockell’s manager, John Simpson, as being at first, the size of a “postage stamp” and then “a telephone booth.” It was a tiny illuminated stage for slaughter and before the sun had dipped behind the Kazar’s slopes of seats, the men entered for the fight. Cockell, who weighed just 14.9 stone, was nowhere near as “fat” as the writers suggested. Incidentally, Cockell would later sue the Daily Mail for calling him “overweight and flabby.” Henry Cooper was a witness in Cockell’s defence and the boxer won £7,500 in damages, plus costs. That’s a considerable sum in the late Fifties.

There is an extraordinary version of the fight available for those brave enough to watch it. It is in colour and is as evocative of the time as it is disturbing to view. Marciano narrates the brutality, at times honest to a fault and at other times oblivious to his excesses. It is doubtful Don Cockell ever watched and heard this version of the fight and that is a great, great pity. Marciano’s praise during the rounds for Cockell extends far beyond the universal acceptance of the Battersea boy’s bravery. It is the bravest performance ever by a British boxer in a world title fight.

However, Marciano also talks about Cockell’s other assets: his skill, his speed, his ability to make Rocky miss with punches and then counter. Cockell goes at Marciano, even tries to match the fouling. “I gave it a go, but he was very good at it,” Cockell said in the Sixties.

“He knows what he’s doing,” Marciano said at the end of the first round. It is genuine praise and Cockell, having his 79th fight, did know what he was doing. He just never had the power.

Sadly for Cockell, Marciano also knew what he was doing.

The list of fouls is long and specific, put together by witnesses on the night, compiled for a hopeful dossier of complaint: kidney shots, the low blows, the head butts, the elbows, the shoulder, the shots after the bell, the clear punch when Cockell was down. The fouls are numbered, catalogued, grieved over, but Cockell never uttered a word through his swollen lips on the night. He just shook his head when asked if he thought Marciano would have been thrown out in a British ring. He would have, by the way.

There is a glorious moment in round seven when Marciano talks about getting his “combinations going”. At that exact moment he connects with a left hook, a perfect left elbow and then a perfect butt. Yes, that combination. It is classic. Cockell takes all three, turns to the referee and half-smiles. Cockell had no protection that night and the violation continued through sundown.

Marciano hits Cockell low from the opening minute until the end at fifty-four seconds of round 9. Cockell has been dropped, he has been sick in the corner from the low shots, he is cut, he is badly dazed, he is staggering, but he is still trying to fight. Still swinging. “What a man he is, what a heart,” Marciano utters as his hand is raised.

Minutes after it was over there was a promise from promoter Jack Solomons to deliver a rematch in London. One British paper declared that Cockell’s resistance was “really a victory.”  It was hard enough to stomach the fight, without this craziness.

Cockell lost twice more and quit. As I said, he was never the same.