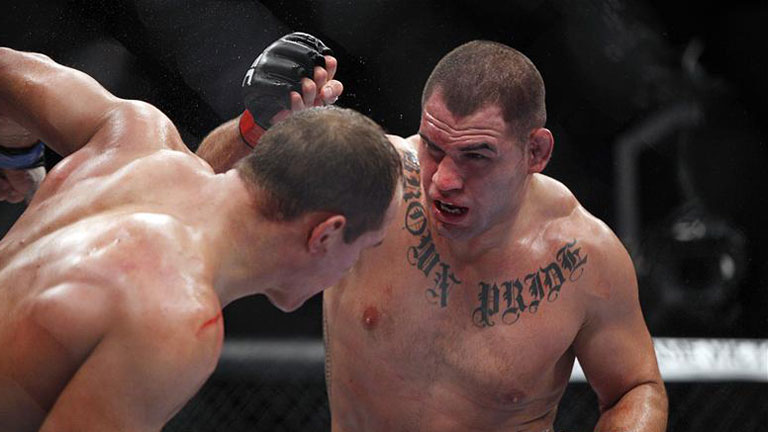 Martin Potter looks at injuries in MMA and how, if at all, they can be prevented

WHEN former UFC Heavyweight champion Cain Velasquez pulled out of his title rematch with Febricio Werdum – the second time he has had to pull out of a contest with Werdum – it seemed an acceptable replacement bout had been found. Stipe Miocic, on a run of knockout victories and extremely vocal about wanting the next shot, was drafted in and the stage seemed set for Werdum to defend against the next best thing after Cain. The champ, however, had not read the script…

Werdum, whilst admitting he would have still fought Velasquez, also pulled out citing injury and us such leaves what was a PPV without a PPV worthy headliner. It is not uncommon for injuries to occur in the UFC, or any sport for that matter, but the impact of injuries to main event competitors in prize fighting, be it MMA or boxing, is seismic when compared to that of other sports. If Wayne Rooney gets injured before a Champions League game, the game still goes ahead, the fans still attend, everyone gets paid and the impact is fairly minimal. The same can not be said in MMA or boxing.

So what are the common causes of injury and what can fighters, at all levels, do to prevent them?

Diet may seem a strange place to start; surely what you eat can’t cause fight preventing injuries, right? Wrong! Poor diet, bad weight management and inadequate hydration are actually some of the most dangerous things a fighter can do.

In the UFC Brock Lesnar, nicknamed ‘The Beast’ now he is back in professional wrestling due to his incredible size and intensity, took the UFC world heavyweight title in less than a handful of fights. Yet Lesnar’s title reign, although ended officially by Cain Velasquez, was really destroyed by the stomach condition diverticulitis. Lesnar himself acknowledges that his diet pre illness was heavily protein based and a big contributing factor to his problems, resulting in cancelled fights and months on the sidelines. It was meat, meat and a side order of meat – it’s fair to say vegetables were not on the menu.

In terms of rehydration, the idea of Ricky Hatton’s post weigh in all day gut buster breakfast would send today’s sports nutritionists’ blood pressure higher than Hatton’s after said breakfast.

So what approach should fighters take to diet? In many ways it should be simple; always eat sensibly (odd cheat day aside) even when not in competition so as not to make any weight cut unmanageable. Eat lean meats including grilled chicken, turkey and venison, vegetables, brown rice as well as nuts and berries. Rehydrate sensibly with water, also ensuring you put back in electrolytes with sports drinks. Always read the labels to anything you put in your body – no likes or believes drug test failure excuses. See, easy (unless you like cakes and beer as much as this writer…).

Training injuries are probably the most common, as witnessed by the fact that both Cain Velasquez and Fabricio Werdum have pulled out of their rematch after long training camps. In a full contact, high intensity sport like MMA preventing injuries from occurring in training is almost impossible. Over the years many fighters have said that they carry some minor injury or knock into pretty much every fight.

There are things that can lessen the chance of a training injury though. You may think that training yourself into the ground all day, every day is the best way to prepare for competition, but it isn’t. Yes, cardio is a key tool in any fighters arsenal but a sensible training programme that builds it over time and then tapers off towards fights night means you are far less likely to pick up strains and pulls than if taking an all out one hundred miles per hour balls-to-the-wall approach. All top level professionals in MMA should seek the advice of a strength and conditioning coach and those at the lower levels should at least read up on it and set challenging but obtainable goals. You want to stretch yourself, not put yourself on a stretcher.

The same measured approach should also apply to sparring. It does not matter if you get put on your backside by a novice if you’re practicing a certain technique or strategy. It will matter if you get put down in a real contest because you expended too much energy and intensity trying to prove your machismo in sparring. Remember, title belts are not handed out in the gym.

The best way to minimise the risk of an in fight injury is to prepare properly with diet and training as detailed above. However this is not always enough and sometimes freak injuries and accidents can bring a premature end to a contest.

When Anderson Silva fought his rematch with Chris Weidman, the compound fracture he suffered to his leg was horrific and career threatening. The frightening thing is that there was nothing really that could be done to prevent it; Silva had thrown the same kick thousands of times without issue but on this occasion he caught an unlucky break, in all regards.

More recently Matt Mitrione suffered a bad eye injury following repeated eye pokes – a hazard of wearing open mitt gloves. This is quite common in MMA and perhaps tougher penalties and stronger refereeing could prevent injuries like Mitrione’s from occurring in future. All MMA fighters should desist from pushing out towards their opponents face with open fingers.

MMA is a tough, tough game. You will get hurt, you will get injured and any fighter has to accept this but as the saying goes, no pain, no gain.