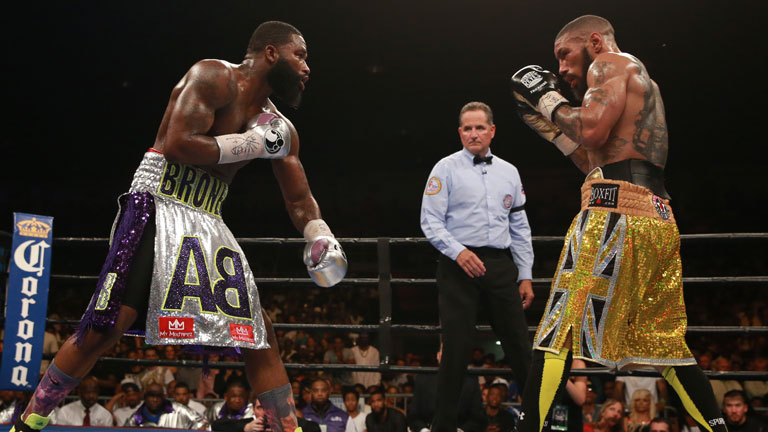 ADRIEN BRONER did his image no good by failing to make the weight for his defence of the WBA super light title against Ashley Theophane. It was reported that he was 0.4lbs over the limit but did not even bother to try to take off the excess. That shows an arrogant disrespect to his opponent to the WBA, TV and the fans. Late last year the WBA upgraded him from secondary champion to “Super” champion and in return he symbolically threw their “Super” title into the trash can.

Any time a fighter fails to make the weight for a fight he is in breach of contract. In any other business that can have serious consequences but not in boxing. We recently had Randy Caballero coming in 5 ½lbs over the contract weight for an IBF title fight against Lee Haskins and Haskins exercised his right not to fight an overweight contest. That breach of contract by Caballero robbed TV of a title fight they had advertised and sold to the public, it robbed the promoter of a title fight he had sold tickets for and robbed the fans of a fight they had paid for as a ticket is a contract between the promoter and the fans. But this breach is just accepted by all concerned with a shrug of the shoulders. Going back to Broner it is not the first time he has breached his contract. He was 3 ½ lbs overweight when he was supposed to fight Vicente Escobedo for the vacant WBO super feather title in 2012. Until there are severe consequences fighters will continue to come over the contract weight. I would like to see someone sue a fighter who does that for breach of contract just as a test case. Fines are an obvious response but it would good to think that the sanctioning body involved would put a ban on the fighter fighting for their title for five years, but that is not going to happen and, since none of the sanctioning bodies work together, the fighter could fight for another title just a few months later. As for Broner he is a problem to TV, to promoters and of course now also to the police. That’s “The Problem”.

It was good news for everyone that Nick Blackwell emerged from his induced coma and seems to be on the way to recovery. The fight showed again the heavy responsibility for the safety of fighters that rests on a referee’s shoulders. Choosing the right time to stop a fight means treading the sometimes very thin line that covers too early, just right and too late. We are lucky in that we can claim foresight and use hindsight when making our judgement but the referee has the benefit of neither. His decision is a there and then judgement and unless he hits that middle “just right” band he is going to be criticised in varying degrees. In the case of Eubank vs. Blackwell Nick took a lot of punishment but the referee Victor Loughlin was carefully monitoring when Blackwell was under fire on the ropes and when Loughlin was “hovering” Blackwell either fought his way off the ropes or threw a few punches back to show he was still in the fight. Until the sudden swelling over Blackwell’s left eye it looked as though the fight would go the full twelve rounds as both fighters were tiring and without the benefit of hindsight I felt it was a well timed stoppage by an experienced referee.

Drug testing is another subject that his hit the headlines recently with allegations that Lucas Brown gave a positive test after his title win over Ruslan Chagaev in Grozny. That follows the allegations that Olanrewaju Durodola gave a positive test after beating Dmitry Kudryashov in Russia and Mariusz Wach also did after his fight with Alex Povetkin so it is a hot subject right now. Browne knew and agreed that VADA would be overseeing the testing and he took a test when he arrived in Grozny which showed no banned substances. He also knew that there would be a post fight test and it would be the height of stupidity for him to have taken a banned substance after that pre-fight test and both Browne and the people around him are experienced and knowledgeable. On the other hand the VADA are an un-affiliated world respected organisation so have no axe to grind for Chagaev’s team. It would seem the best way of clearing this would be to have Browne’s B sample tested but not unreasonably he maintains that if the first had been tampered there is no reason to believe the second would not also have been “doctored”. It also does not inspire confidence in the officials in Grozny that I noted in my fight report that the round where Browne was knocked down and in trouble overran by 18 seconds.

In the cases of Durodola and Wach things were significantly different. The WBC refused to accept the positive tests in their A samples due to serious doubts over compliance with procedures by the Russian Anti-Doping Agency (RUSADA) and the VADA were not involved. The WBC also saw no benefit in having the B samples tested for the same reason, the doubts over compliance with procedures. I do not believe for one minute that Browne took a banned substance but I also believe in the integrity of the VADA so I don’t know a way of resolving this but then it is the WBA’s problem and not mine thankfully.

It does however mean that some special arrangements will have to be put in place for testing in the WBC title fight in Russia between Deontay Wilder and Alex Povetkin. The Russian promoter has said that VADA will be used to oversee the testing. However the Russian Boxing Federation has not confirmed.

Being a boxer in Zimbabwe is almost impossible which is why Charles Manyuchi has had to do almost all of his fighting either in Zambia or some other guy’s backyard. A 14-0-1 run has earned him a fight with Russian Dmitry Mikhaylenko (21-0) for the WBC Silver title at welterweight. Naturally Manyuchi will have to travel to Russia for the fight. He is WBC No 9 and Mikhaylenko No 10 so victory will not get either of them a fight with Danny Garcia but they can dream.

Still on Africa/Africans two of Ghana’s best fighters, Joshua Clottey and Joseph Agbeko are both returning to action on 29 April in Accra on the “Legendary Night of Boxing. Proposed matches are Clottey vs. Brazilian Anderson Clayton and Agbeko vs. Filipino Cris Alfante. Clottey has said he will fight for two more years and then retire.

There is quite a bit of soul searching going on in Ghana. This nation which has produced so many good boxers-and some great ones-faces the prospect of having no fighters at the Olympics for the first time in 20 years. The “Black Bombers” National team failed to get any fighters through the African Olympic qualification tournament and may not even feel it worth spending the money to send any of their boxers to the Final World Olympic Qualifying tournament in Baku. Football is the No 1 sport in Ghana as with most African countries so boxing often gets starved of funds from the Government. The President of the Ghana Amateur Boxing Federation incurred the anger of the team by suggesting that they failed due to their request for a per-diem whilst at the African qualifier. I am going to throw away my chance of qualifying for the Olympics because you won’t give me any pocket money! Somehow I don’t think so.

Still on Africa Boxing South Africa (BSA) announced they have appointed a new financial officer in Thabang Moses. They have still not filled the Chief Executive slot but one can only hope they have done more due diligence over this position than they have in the past. Their previous financial officer was dismissed for “financial irregularities”. The Chief Executive Officer post was to have been filled by the end of last year but is still vacant. Due diligence seems to have been on holiday when their last CEO was sacked last year after a tribunal found him guilty of 10 of 14 charges five of them involving “gross dishonesty” and the man appointed as acting CEO resigned while on suspension amid several allegations of corruption, fraud and mismanagement-and the BSA then gave him a licence to train and manage boxers! I wonder if anyone did due diligence on the Sports Minister?

Russian promoter Andrei Ryabinski has said he is working with the Russian Boxing Federation and Kathy Duva to get the next title defence for Sergey Kovalev in Moscow in June. Nothing settled yet but that is the aim.

It also looks as though the WBA minimum title fight between new champion Byron Rojas and No 1 Knockout CP Freshmart could also have to go to purse offers. The agent for the Thai has offered Rojas $45,000 tax free plus TV rights which could add between $10-15000 to the pot. This is naturally much higher than the reported $15,000 Rojas as the challenger was paid for the Hekkie Budler fight. No deal yet as Rojas’s team want the fight in Nicaragua and say they are prepared to put $100,000 on the table. They will both have to put their money where their mouth is it comes to purse offers.

How boxing has changed. Sven Ottke, the former undefeated IBF and WBA super middle champion, he was 34-0 at the end of his career, feels that one of the fighters he is training is going to become a world champion. It is Tunisian-born, German-based Ikram Kerwat who is 5-0 and fights for the vacant WBC International female title on the Culcay vs. Prada bill on Saturday. There were no female champions when Sven retired in March 2004 with the WBC crowning their first champion in 2005 but now we have some all-female shows as they go from strength to strength.